This Norns script is a port inspired by the Drone & Drama Teensy instrument, a design and implementation originally made open source by Barry Joseph Cullen. In essence, it’s a 3x sine oscillator (drone) instrument with a bitcrushed, filtered noise channel (drama). I’ve been using it to accompany a friend in an improv setting as well as using it in some of my own solo sessions, and the instrument is really fun and playable! It’s great for exploring phasing and adding tension.

Back to the script, here are some additions I’ve made to the original design:

For a demonstration of an earlier version of this script, see this lines post featuring myself on OP-1 and dnd. Note that this recording was pre-bitcrusher, but it does show usage of sub-audio frequencies with feedback (the glitchy clicks).

To see Barry’s original instrument in action, check out this Youtube video: 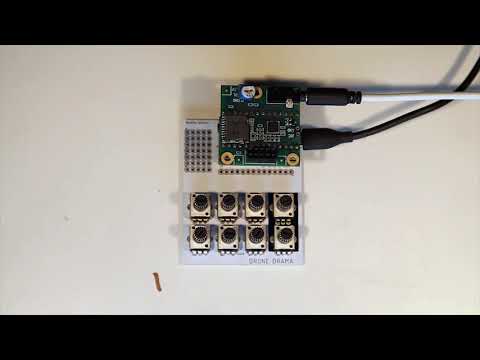 Additionally, note that the Drone & Drama Teensy is itself a compact version of a larger Drone & Drama instrument, which is analog rather than digital. I’d definitely recommend checking out his website - there are many videos and recordings of the instrument (and others!) in action there.

Restart your Norns after installation, as this includes a new engine.

Thanks again to Barry for creating this design and for letting me distribute this port as open source!

i thought this was a reference to ciat lonbarde at first
still cool tho!

Thanks! TBH I’ve been wondering if the name is a reference to the idea of the PB as well. Been chatting with the folks involved in the D&D project today so perhaps I’ll ask

And aside: some kind of Plumbutter recreation has always been a Norns script dream of mine. I’ve sent some audio snippets of attempts to folks and the usual response is “oh this is amazing but sounds nothing like a Plumbutter”

oh this is amazing but sounds nothing like a Plumbutter

this is the spirit of emulation for me - a starting point, rather than a destination !

excited to check this script since I loved that SinOscFB snippet : )

been running this in the background while working all morning - love it!! equal parts beautiful and terrifying

maybe it’s moving a little out of the spirit of it, but it’d be cool to incorporate lfo controls over each parameter, a la hnds? (would be happy to make a PR for it!)

“oh this is amazing but sounds nothing like a Plumbutter”

Seems fine to me! I’m sure I’d enjoy something even inspired by the behavior of plumbutter—and who knows, I might even enjoy it more with some digital sounds.

This thing is fun! & the name compells me to use it in my dungeon synth project somehow ha

excited to check this script since I loved that SinOscFB snippet : )

Means a lot coming from you, glad you enjoyed the recording! Hope you enjoy the script - it’s a simple idea but I’m finding it endless fun especially combined with my fuzz pedal.

The low frequency SinOscFB has already become such a frequent trick of mine that I’m working on a remix of this script - “all drama” - that uses sequenced SinOscFB as a sort of drum machine for nerds. Hoping to post updates here once I develop it

been running this in the background while working all morning - love it!! equal parts beautiful and terrifying

maybe it’s moving a little out of the spirit of it, but it’d be cool to incorporate lfo controls over each parameter, a la hnds ? (would be happy to make a PR for it!)

Thanks, glad you’re enjoying it! As this is a tribute/port to somebody else’s project I’d like to keep feature additions pretty minimal or slow to evolve - I’d recommend exploring two sine waves with close-by frequencies for producing amplitude modulation, or using Sines for full LFO control. I’ll keep this in mind though!

This thing is fun! & the name compells me to use it in my dungeon synth project somehow ha

Love it. And interesting, I’ll have to take another look as I haven’t noticed that so far in my own playing, but I keep volumes pretty low so maybe I haven’t hit that case yet.

Have you checked to see what the noise filter cutoff is at (noise runs through a filter then bitcrusher)? It starts out pretty low at 200hz by default I think, which really only lets crackles through.

When I check the Norns mixer screen I’m finding that at amp of 1 each of the drones just about maxes out the level meter wheras the noise channel at 1 amp only gets to around 0db at any setting, even with at the highest freq with full resonance

Ahh, gotcha - I think setting all of the amps to 1 overloads the Limiter on the output so you hear ducking in response. For no ducking I’d stick with keeping volumes at or below 0.25 for now, but perhaps I should work on an update that doesn’t require this.

Unrelated, I pushed an update this morning that automaps a Midi Fighter Twister when connected before script launch. The controls are:

We’ll see what <unused> gets mapped to eventually… I was thinking a fine-tune control could be nice for more controllable phasing effects.

edit: Ok, you can hold key 1 to fine tune a control on the Norns UI now. Will work on adding to MFT soon.

cool, I just mapped my midi sliders to a range which maxes out at a similar level to the noise channel

Great script, recorded some weird music with sea noise which i will prob use for something