I love buying things that are broken and then fixing them. Or at least trying to

The main thing I buy is older games consoles (Xbox, PS1/2/3 etc) as I have a bit of knowledge around what tends to go wrong with them although I’ll sometimes go for audio related stuff - tape players etc.

I’m not particularly skilled or knowledgeable when it comes to electronics. I enjoy the challenge of trying to figure out what is wrong with things though and researching solutions how to fix them.

I’ll never spend lots of money. If I release the magic smoke with something, or just cannot get it working, I’ve lost little and have usually learned something useful and had a good time in the process. I’m lucky to have space where I can keep the remains of failed attempts to use as spare parts for future projects.

When I do fix something I’ll usually either keep it to use or give it to someone I know. If something has really had very little wrong with it (for example a dvd drive belt needs replacement), I’ll sometimes sell or trade it. But making money isn’t the point.

It continues to surprise me how many people get rid of things that are “broken” only for there to be very little wrong with them. Today’s disposable consumer goods culture I suppose.

Is this something other people here enjoy doing? It might not be with electronics necessarily.

I’m lucky to have space where I can keep the remains of failed attempts to use as spare parts for future projects.

It continues to surprise me how many people get rid of things that are “broken” only for there to be very little wrong with them. Today’s disposable consumer goods culture I suppose.

This is me. I buy broken gear and usually tolerate the issues if I cant figure out a fix

Since prospective buyers are less tolerant of the defects and shipping costs have risen to exceed the value of most expendable gear I own . I reluctantly toss em when I need space for newer/functional tools

Ideally I could find someone to gift them to, but none I’m aware of are local (few yrs ago after talkin about this on instagram I had planned to give vhvl my crumar performer but couldn’t stomach shipping to nyc…)

Ther might be electronics recycling places in your area. Some of these are portals to hell in that they ship their junk to Asia where it contributes to hardcore heavy metal poisioning of the environment. Others are rather heavenly as they follow a repair-and-resell-or-give-away model.

I love to fix things. I built my own modular, and a ton of fx pedals (suburbanheroinelectrocics.com has pics in the blog. Lately I’ve been into full restores.

Here is Micromoog I have been restoring: http://www.suburbanheroinelectronics.com/micromoog-restoration/. I really like getting in there and paying attention to detail, like reviving the aged plastic.

Next up is an MG-1, which will need A LOT of love, but has more modding potential, which is nice.

When I’m done, I usually sell them to someone who will use it more than me. I already have a Minitaur, and a large 5U system, as well as my own Eurorack company now (aisynthesis.com). Time has become limited unfortunately

I got my studio upgraded from one Korg Poly 61 to a CS-80, Ems Synthi and VCS-3, Korg PS-3100 and PS-3200 among many others by buying broken synths, fixing and reselling. Sadly I dont have any of those anymore!

I recently installed a workbench in an underutilized closet connected to my studio. It was mostly filled with boxes. Empty boxes.

I’m so thrilled to have a dedicated bench space for my DIY addiction. Right now, there is a mostly built Ornaments + Crimes waiting for the final parts to arrive. Next, I’m fixing up an old Supro Bantam I found at an antique store for cheap (its a widow-maker model so someone check on me in a week or two). After that I’ve got some mods to make to my JTM45 I built. After that, I may finally complete the eurorack-space heater case I started over a year ago.

To echo your sentiments, having dedicated space for the tools, supplies, and spare parts is all the difference. Too much time and money wasted waiting on parts to arrive, looking for old parts, and losing things in the process.

I built a space to do this and began putting together my required tool list… and… it became a new kind of GAS in that I now have far more effort expended on building a great workbench than on using it.

So… will be building a THONK Turing kit next week to get my ass moving along the ‘doing not preparing’ spectrum.

Then I have several projects lined up. First is to try to get an ancient calculator working… just to freshen the testing and diagnosis skills… then onwards!

If you want a shock, look at the price of good quality bench tools. Ouch. Makes modular gear seem cheap.

Kind of related - I have often modded gameboys for my chiptune project (www.donotrunwithpixels.xyz), and just last night I did the backlight and audio mod on a game boy pocket for the first time. Much fiddlier than the older larger gameboys!

Found myself with an EMS Synthi - which i am really excited about. Sad thing is it lacks the AC power cable. Does anyone know something about such a socked (3 pins and round / see image)? 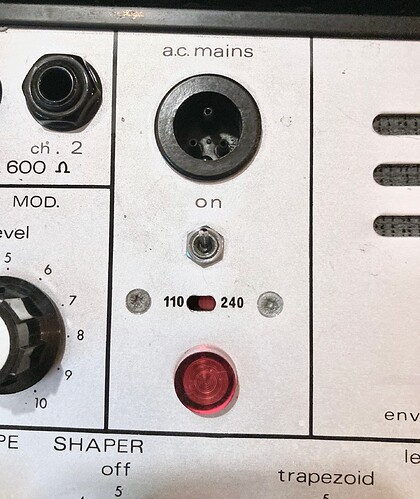 Thanks! Found this German site: Home EMS
Seems he has original parts - wrote him a mail, hope to hear from him back.

I also understand Robin Wood is currently the person who runs “original” EMS in UK:

You can get Mini Bulgin connectors from electronics stores, but if you want a pre-made cable then it’s probably better to ask Rehberg or one of those. I know they were used in some other known gear as well (maybe some old guitar amps?), but would have no idea where to buy a cable…

Great link, thanks! Cause my Synthi (sounds still crazy to me) lost some pins on its way - i‘ll go direct to EMS and order a handfull of these with the power cord.

I’ve been buying old/broken/untested things on goodwill/ebay to clean, fix, and refurbish them, play with them for a while, and then selling them to (eventually) fund the whole operation or other purchases. Mostly tape recorders and fun casio keyboards (or the occasional omnichord), and other utilitarian things.

It’s quite fun, and i get to try all sorts of things that i probably wouldn’t be able to justify buying at normal prices. Tricky to not rationalize the shopaholism and hoarding though

I have an omnichord that could use some fixing. I should check it but what I remember the buttons weren’t triggering well. Do you happen to have any tips for this?

Which Omnichord do you have? I had some flaky membrane keys and was able to get them back working again on my OM-150. I documented the tear down process with photographs. A bit of a challenge to open all the way up to get to the button board. On the board side of those rubber membrane key / buttons are carbon pads that get worn and build up gunk on the board contacts preventing triggering properly. There is a product called calikote 44 by caig you basically paint on and let cure to restore the conductivity. Happy to offer some advice if you decide to take this route to restore if that is the issue

For anyone with a JamMan Stereo Looper at hand… I fried my unit with a bad power supply. If you have time would you be interested in figuring out the electronics of the JamMan power input? I’d like to plot out schematics for the power related components following the 9VAC socket. I cleaned out two fried diodes and an inductor BUT all the traces are burned and I can’t make out how the component should be connected. I think there was a small smd capacitor in the debris too (C9 was populated but I’m not sure about C8 & C10).

If you have a JamMan open on your bench I’d appreciate a glimpse. I also tore out R230 while removing the USB socket for a cleaner view to the burned area. Alternatively if you have a broken JamMan you’d like to let go of in EU area I’d like to acquire it for spare parts (to make two broken JamMans into one working unit). 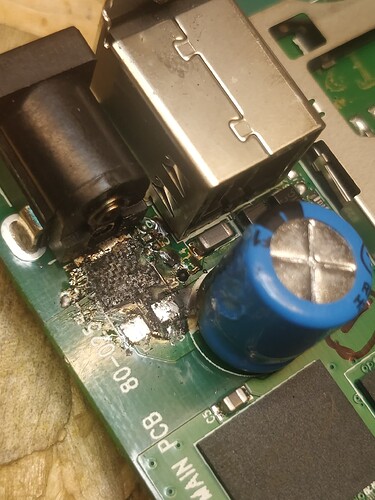 FWIW, apparently some generation of JamMan Stereos could run on both AC and DC - they didn’t just advertise the DC capability but it was there from some revision onwards because Digitech was transitioning to DC supplies in their pedal line. So it’s possible there are two versions of the PSU circuit out there, which may complicate reverse engineering / figuring out a tiny bit.

(I saw your ad at the local musicians’ forum, almost wanted to buy the other completely working JamMan Stereo that was available there, just so that I could try one out and help figuring it out… I suppose the parts won’t be very difficult to get if only one can figure out the circuit itself)

That’s lovely! And good to know about the AC and DC capability. I got a tip on an other forum with pictures to the PCB but unfortunately the USB socket blocks the view. Feeling optimistic non the less.

I love fixing things but my soldering skill is awful so I tend to avoid it to avoid completely bodging something
that said, if there is a fix to something that I’m confident I can do, I will 100% try, and even if something is a pain to repair I give it a shot because a commercial repair would cost more than a replacement, and it’s going from something being broken to something having a chance of being fixed. I also use a lot of janky crap, because it’s better than throwing it out.
The most annoying ones are when some part breaks (usually a charging port) on something but then because that one part is broken none of it is usable any more. I had an mp3 player like that: one button died (which I could work around) but because of the way it scanned inputs, that made the whole player unusable as it locked up all the other buttons.