This script turns monome crow into a 4-channel drum machine synth. Driven with a monome teletype or druid. 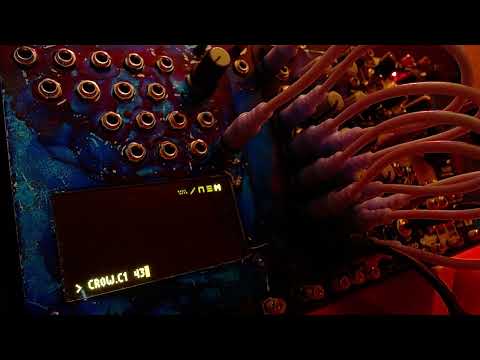 Six months ago, I was wishing that I could code sounds directly from teletype somehow. I was scrolling through Flash Crash performances and found @License’s video (linked above). We were talking about it in the teletype discord and then License linked his code. It was a quick sketch he made for Flash Crash and let go of, but it was exactly the thing I was looking for so I started studying and eventually Flash Crashed an early version of it. From there, I started filling in the gaps, expanding the modulation capabilities, and investigating how to make audio rate ASL Oscillators with crow. It expanded way beyond what either of us thought we could do with crow. There’s a lot more to explore here. This v1.0 is enough for now. Feel free to mod the code, expand it, simplify it, remove the sequencer tempo limit and turn it up to 30000 bpm.

Huge thanks to @License, @fourhoarder, @AOTA/Jordo, @FRIENDMAN, @WilliamHazard, @scanner_darkly, @keinexco, @echophon, @mwilliams oh I don’t even know who to tag, literally everyone on the crow studies, teletype studies, ezbot discords, and everyone involved with making Flash Crash happen, y’all know who you are, thanks to anyone who listened to one of these funny noisy drum beats, thanks all for the encouragement <3

For a bird’s eye view, see drumcrow parameter matrix in the github documentation.

this is inspirational. museum-worthy, wow

Could Bowery work with this somehow? I don’t have teletype (or much scripting knowledge) and I really want to play with this. It sounds so astoundingly great! 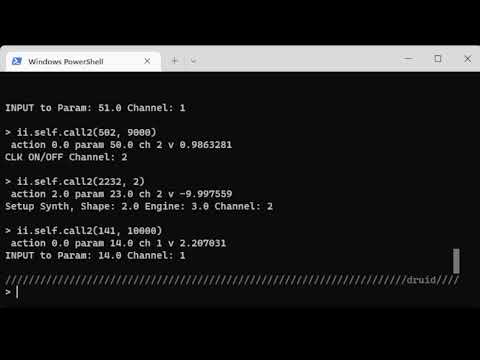 It kind of works playing from druid! I haven’t tested it from an only druid perspective before. I’ll fix up the step sequencer and do some more thorough druid-only testing we’ll be at v1.1 in no time lol

I think Bowery is the name of the collection of druid capable scripts, if I’m not mistaken.

Probably could join the murder.

I don’t have teletype (or much scripting knowledge)

I think the only command you’ll need to know is ii.self.call2( param, value ) to drive drumcrow via druid. Pick the param, set the value, repeat. Most values are between 0 to 16384 because it’s tuned to teletype. Looks like there’s a bug with C2 and 5(6-9)X, so I’ll update the thread when it’s good for druid operation. There are only 3 calls, but there are a lot of parameters to select from.

Use any 0-10V constant output available in your modular rack to set values using ii.self.call1 and you can follow along with the teletype tutorial video. The only teletype specific thing happening is I put a call3 in $1 and $2, which I delete maybe 6 minutes into the jam and use drumcrow’s internal trigger sequencers instead for the rest of it. If you do not have a 0-10V output available to set the input voltage, then try setting parameters using call2.

I’ll try and update the documentation and post a druid only video covering the same example code.

woah ok now we’re talking. was gonna say, one of the things that’s so cool about this is that it doesn’t just bust ASL open for TT users.

this is so freaking cool! can’t wait to give it a go

Man, I need me a teletype lololol.

non-critical bugs:
using C2 to set a harmonic sometimes sets things to like 3.999 instead of 4
rare randomly occurring error where amplitude is set to nil (line 364, let me know if it happens to you)