Couldn’t find a thread dedicated to acoustic drums (primarily in the form of a drumset) and wanted to start one because it’s a rabbit hole I want to explore in the coming year, and I’m sure there’s some stellar drum talent on this forum!

I just finished recording my second album and already my mind is buzzing about big ideas for the next one, but before I can begin to make it happen I have to do a lot of studying and practicing, and a bit of purchasing- and I am a bit lost as to how to begin.

I have some experience with drumming self-taught- growing up I had an electronic kit and learned to play various rock and alternative songs well enough, so there’s some amount of beginner’s dexterity there to build on. But I’m looking to delve more into the jazz/experimental style of things and get a little more serious about it.

Stuff like this has been a big inspiration lately: 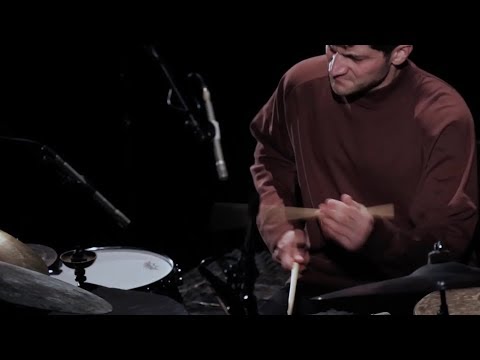 but also I’m loving a lot of the more straightforward jazz drumming I’m exploring as well.

Any recommendations for resources on developing some jazz drumming techniques/fundamentals?

And lastly comes the matter of the drumset itself. A friend of mine is selling me his old set for mega cheap, and I think all components of it will be good enough for my learning, except for the kick, which sounds comically horrible. Any recommendations as far as kick goes? I’d say I’m definitely looking to achieve a muffled but quite deep tone- so that when the kick hits in these recordings, it really hits. Is a real large kick with a blanket inside (or other treatments) the way to go?

Eli is some sort of fidgety trembling acoustic drum noise god, I’ve had stadium on repeat for god knows how long - would love to find some more stuff like this. I know there’s some almost similar stuff in the Tabla realm but I’m interested to find more stuff using drum controlled interactions into Ableton like Eli does.

Small kick, light playing and a front head with no port hole will get you a nice kick drum tone like that @n-So. Lots of cool vintage orphan kick drums lying around on the internet!

@Rodrigo is awesome and i think of him especially re drums and innovation. even just researching his fairly well documented stuff i bet would yield inspiration to just about anybody here (if one hasn’t do-n-So already)

Perhaps you’re already aware, but don’t underestimate the importance of heads and tuning in getting a good drum sound. A well tuned cheap kick with a fresh head will sound better than an expensive kick poorly tuned. Heads are relatively cheap and there’s loads of good tuning tutorials online.

For straight technique stuff, most of my work is spent in The New Breed and Syncopation For The Modern Drummer. Specifically 8 pages from each that you can apply to an infinite/endless world of variations/possibilities. (I was shown a ton of variations by an older teacher, but if you have a search on Youtube I’m sure you’ll find a ton of resources for how to “read” through those pages)

Fundamentally The New Breed is for non-syncopated stuff, and Syncopation stuff is more for swing-y things.

The John Riley books (The Art of Bop Drumming, and Beyond Bop Drumming) are more modern takes on the Syncopation book, and cover tons more ground.

Lately I’ve been really getting into the Mark Guiliana book as there are some nice concepts and approaches in there, plus he’s a really interesting and inspiring drummer (as far as “regular” playing goes).

Chris Corsano was a massive inspiration early on for me (still is, though my playing/interests have moved in a different direction), but he is ceaselessly creative and interesting).

@n-So we know you to be a great musician you’ll know it when you hear it
http://prodrumshop.com/

first thing to do is replace all of the heads on the kit with new ones.

look at all of the variety of heads out there and looks into their sound and application.

then REALLY learn how to tune the kit.
each drum is an instrument unto itself. so you need to learn the nuances of each instrument and how they collectively create a sound in concert with each other.

as far as your question about the kick…
it depends on the style.
know that…giant wannabe Bonham kicks are almost always sonically a problem on stage and a real fracken problem to drag around.

a 22" is always best to start with and anything below an 18" is more of an effect.

start with a rolled up towel and lightly duct tape down to the shell so it just touches the batter head.
then try small blankets and move up from there to eventually a packing blanket.
which would be silly heavy muffling but it’s always good to experiment.

if you are using closed heads on the kick be sure get good placement of the muffling and again spend time tuning the resonant head.

as far as delving into Jazz drumming…the one and most important book is Jim Chapin’s “Advanced Techniques for the Modern Drummer”.

there are hordes of books out like studies on Art Blakey and all sorts of studies in swing, etc. but if you want to start with the absolute corner stone of jazz studies then look into Chapin’s book. 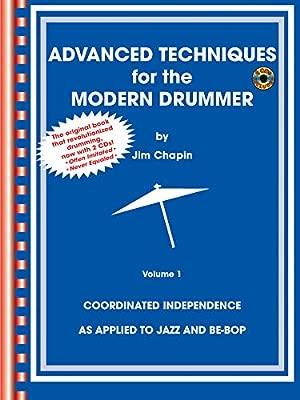 two other suggestions for serious playing are the Ted Reed Syncopation book and Stick Control by Stone.

also…
always practice with a metronome.

I have no contribution here except to tag @youngweather who is a phenomenal drummer.

And to say that I’m mega stoked for your new record!

Love this as an idea for a thread! (and @mattlowery is too kind).

A couple of things I love exploring are playing acoustic drums alongside programmed music, to explore relationships between quantized (and groove-quantized) and randomized beats, melodies, etc. On the same tip, I love thinking about how being a drummer affects my approach to experimental music and ambient music, which so commonly has a strange, if any role, for acoustic drums. I can link to an article I wrote for SEAMUS if anyone is curious.

As one possible path, and something that is by no means earth-shattering, using effects pedals (and plugins) to change the texture of drums is something I’m mildly obsessed with, even down to the processes for mic-line-instrument leveling and impedance matching for best results. I did a few workshops at Ableton Loop in 2018 about this, and happy to send notes and thoughts if anyone needs! One of the most fascinating things about the relatively simple process of pedal processing on drums is how it can inform your acoustic playing, to think texturally, to think about the note lengths you play when the sound envelope is changed in dramatic ways…tons of fun -acoustically- with this.

And when it comes to things I’m trying to grow in, a jazz guitarist friend of mine suggested studying polyrhtyhms, especially within Latin and Afro-Latin musical styles. This can often translate well once more into looped music (as opposed or in conversation with jazz’s potential for non-linearity) and teaches some absolutely critical (and challenging) dynamic independence on the acoustic kit no matter what your styles!

Excited to see this thread develop - so much to learn!

This here and also don’t underestimate the sound of the room in which you play. My first years playing the drums I always wondered, why my teachers set sounded so tight and mine was kinda lousy. Turns out my basement just didn’t really complement the drums as did his treated studio. Some people really take the time and tune their kit according to the track their recording and it shows in the end. Also the Nylon-tip sticks were a revelation to me, as I just like how they sound on cymbals.

any advice on buying a used kit online? can’t imagine I’ll be trying things out in person given the current situation, but I really would like a kit now.

@n-So feel free to DM me if you need any advice on kits you find. Though i work at a retailer, i only play/buy vintage used drums.

the good news is that it’s a contraption (trap set)
and many parts can be swapped out or improved over time
look for good shells -
rims, snares, heads, dampers, pedals, stands can all be changed
every cymbal does sound different
and that’s really like half the kit
they’re kinda magic
if you get into it, it may not be the last drum set

I agree with the comments on the importance of tuning and what abalone said. Drummers often end up switching out hardware and usually the snare from the one that came with the kit, even if they like the shells.

If you plan to record, I recommend starting with Remo Ambassadors because they always work and investing in quality thin cymbals that record well, like Zildjian Ks or Paiste 602s.

Aside from that, moongels are fine sometimes but resist going crazy overdampening the drums.

Finally, overhead mic choice makes a huge difference in drum sound, and capture pattern will be important to the room as well. Always check your mic mix in mono.

I’ve always been really impressed with the Gretsch Catalina line, great sound and looks for the price point. Really taking the time to experiment and get comfortable with tuning though is the most important part of getting a good sound. I’ve found the YouTube channel “Sounds Like A Drum” to be a pretty good resource in improving my drum tuning skills.