For those of you interested in what Elektron has been teasing for a while - it’s a distortion unit! Looks lovely but can’t imagine how I’d justify that cost to myself… 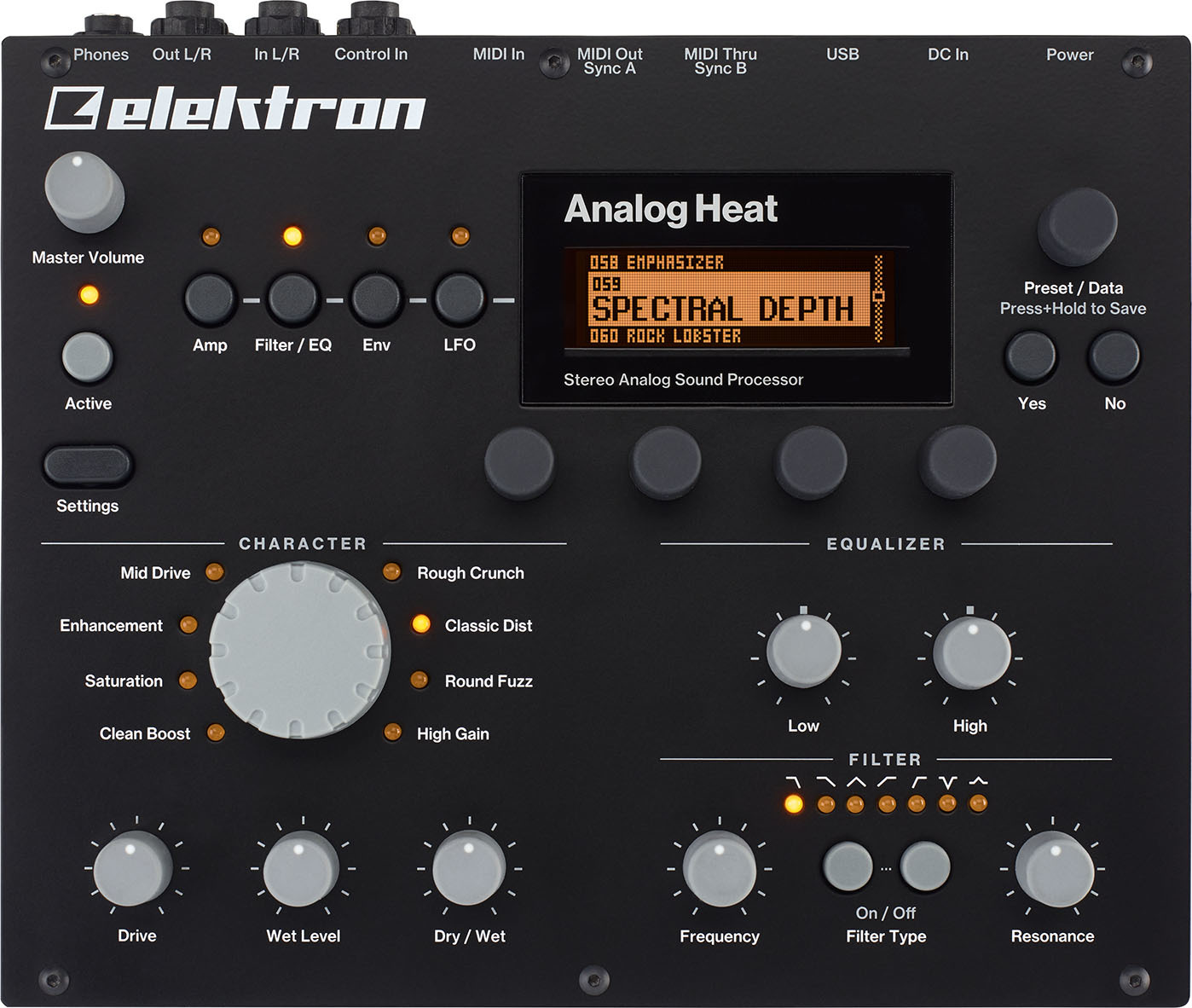 I had a thoroughly mixed reaction to it this morning. I like it, but I also kind of don’t. Not boring rip-off junk, but not particularly exciting either. The interactive demo sounds good, it looks good, I like that there’s several distortion circuits and that the filter has so many modes (what looks to be peak at the end is a nice addition). But, the price seems a little high for distortion and a filter, even being stereo and only having a modest level of direct competition. I may be a hard sell there since I already have multiple (and too many really) standalone stereo distortion and filter boxes.

I was surprised it didn’t add just one extra thing, like if they threw in a delay or a looper or compressor or something, just to give it a hook. I’m guessing the Overbridge integration and built-in audio interface is intended to be a major selling feature, but I’m all shrugs on that front.

So, it seems fine. Mostly okay, even.

Could make a pretty extensive pedal board for that kind of dough.

Some things to consider when thinking about the price tag:

Yeah, there’s a wide spread in available audio tech in terms of price/performance/value. We live in an age of embarrassment of riches. In a way, it’s surprising that any company takes the risk of introducing anything new, given the richness of the competitive landscape.

That’s true about considering the audio interface as part of the bargain. I did like the SoundCloud clips.

I’m kinda baffled by this… It does one thing really. To me the additions of a built-in interface are strange, from a studio point of view of course.
Balanced in & outs are nice though, although not sure how well mic’s will play with that 39k ohm input impedance.

I have a feeling if this ‘sells’ there will be a ‘reverb/delay’ versions and maybe more.

Also why do they make the damn frequency knob so small! That character knob would have been so much better as an assignable knob…

The more i look at it, the more problems i see.
I know I’m extremely fussy about gear ergonomics. Slightly biased against Elektron these days too for multiple reasons…

I really hope the industry moves away from mystery teaser videos, they seem to me to be the cause of so much of the tepid, middling reaction to what eventually comes out. That stupid video two months ago did not encourage me to be excited about a distortion/filter combo.

I agree that the price isn’t outrageous relative to other choices, although I guess there’s a big assumption being made that this is higher quality to anything made by Waldorf or Vermona or Jomox. It’s cheap certainly compared to something like a Culture Vulture, but there’s a case to be made that the price to quality ratio in that market is governed as much by cultural acceptance as any technical specification.

It is weird that the distortion circuit selector is the biggest control, and that despite being stereo, there doesn’t appear to be any stereo-specific controls (maybe hidden away in the menus?).

(just chiming in to say that I really dug the demo web interface! surprised I haven’t seen that kind of faux-UI with realtime sample switching stuff)

pretty excited about this actually. analog distortion with a built in filter / envelope follower / modulation / midi, 8 different types - this sounds very good in theory, so might justify the price. are there any comparable analog hardware boxes with multiple distortion types?

I don’t know of comparable products with all these integrated functions. But for the money I could assemble 4-7 very interesting pedals made by a number of manufacturers (many of them boutique) that would provide very interesting character for similar functions.

Not comparable. Completely different, actually. But I guess more interesting to me. It’s the whole integrated vs modular debate. I don’t really fall on either side in general, which is why I’ve got ITB software, a Nord Rack 3, the start of a eurorack case, and the start of a pedalboard.

With regard to integrated systems, there are times when I really wish the Nord had a built-in sequencer, but fortunately it has a robust enough MIDI implementation that I can more or less fake it (with admittedly more effort than using, say, a Prophet’s sequencer).

Maybe Heat has integrated its functions in interesting enough ways to make it more than a sum of its parts, which could justify the expense I suppose.

One thing I really like about the idea of the Heat is that you can store presets. Distortion boxes tend to always have very narrow sweet spots for different sound sources. The ability to save and recall that is quite nice. The demos sound pretty good too.

are there any comparable analog hardware boxes with multiple distortion types?

I don’t think so, that’s a lot of checkboxes to hit: stereo, analog signal chain, multimode filter, multiple distortion types, AD/DA integration/interface, tabletop form factor. In terms of end result and constituent parts, I do think there are lots of alternatives for a similar price. There are trade-offs to be made then, of course, and how those trade-offs square with anybody is a matter of personal goals and tastes as always. But, the price seems fine all things considered.

End results and constituent parts are more my interest, and I don’t get a sense yet of how much of an identity this thing has beyond its holistic approach, which seems unusual considering the other Elektron devices all very much have immediately obvious quirks and personality. All-in-one convenience is nice, but not so thrilling.

I love love love Elektron machines. The creativity, quality, thoughtfulness and great sound are for me, unparalleled. Yet I too was underwhelmed. This is only slightly due to the teaser video but mostly due to my rampant imagination and selfish hopes. To explain: The past few years have been an explosion of one piece of amazing gear after another. So much so that I fully expected (even felt a bit owed) that Elektron’s new machine would raise the bar even higher (ok, I really wanted an Octatrack II). Yet Heat, for what it is, is certainly in relation with all of the above superlatives. That is, everything I’ve come to expect from Elektron is there it’s just not what I wanted. To that end I do wonder how they chose what to make next. Why Heat and not an OT 2 or a P locking FX powerhouse sequencer or an Elektron car?

i doubt they would want to introduce a new version of OT any time soon… fx box with sequencer / plocks would be a natural fit for their line but i wonder if what they had in mind was using OT as the main sequencer controlling external effect boxes such as this one. so you get the same functionality but with the ability to choose the effects and all the benefits of having a dedicated analog hardware.

totally agree, and I hear you on the pedals option, but in their defense I’d point out that there really aren’t a lot of great outboard multi-overdrive units that can operate in stereo (even in the higher end studio market). as someone who has been begrudging the lack of stereo fuzz/overdrive/saturation hardware options (or pedal options - I’ve come very close to ordering a second fuzz factory just so I could approximate a stereo version), this is finally a real solution.

that said, I probably won’t get one any time soon. wamp waamp.

I guess most guitarists tend to think of overdrive as before any spatialization in their effects chain, and their signal is mono coming out of the instrument, hence few stereo distortion pedal options available.

So, I get your point.

elektron posted a video of controlling AH with OT:

I’ve had mine for three weeks now and I’m very happy with it. So far it’s mainly been hooked up to the OP1.

While the distortion circuits aren’t as characterful as some dedicated units, they all sound good and are useful. Even Clean Boost adds a nice weight to sounds, which is distinct from just turning up the volume.

The filter is good. Again, it doesn’t have as much character as some dedicated units, but it responds well and is useful for shaping. The filter self-resonates and at higher resonances can add a very nice percussive attack and punch to synth patches.

Overall, I think it is a useful tool for sound design and recording, especially with overbridge integration. The build quality is very nice.