Some not so light reading, just saving this here for later reference and/or discussion. If you have anything to add to the list, please do, I’d love to read anything on this topic.

Emergence, the idea that in some sense more comes out of a system than was put in, is the holy grail of generative art. Yet emergence is a slippery concept. Originating in the philosophy of science, it has been taken up in systems theory, cognitive science and Artificial Life. As a consequence there are numerous definitions of emergence in the literature, but none well-suited to discussions of generative art. The paper reviews some existing definitions and proposes a new definition of generative-art emergence.

Some further reading specific to music:

This essay provides a description of the author’s real-time score interpretation of David Birchfield’s Community Art: Resonant Energy. The piece is composed for percussion and computer and uses a genetic algorithm to generate a score and computer playback of pre-recorded percussion samples in real- time. The author discusses the details of the genetic algorithm such as hierarchical form, mating, fitness evaluation, and contour definition. These processes are related to the understanding of the work in regards to the issues of performance execution, instrumentation, musical gesturing, and real-time score analysis. These issues are thoroughly illustrated with examples from the piece. The author offers a specific approach to performing within Birchfield’s co-evolutionary musical system. 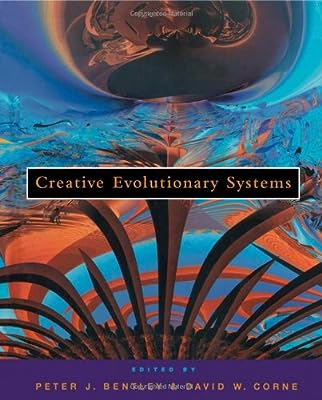 This paper will review electronic music and sonic art applications of Cellular Automata (CA) in a historical and technical context. Algorithmic and computational processes have been of interest to artists for many years, creating an emerging culture of generative electronic art. Creating patterns and sequences is necessary for the creative artist working spatially and temporally within a chosen medium. CA are capable of a wide variety of emergent behaviours and represent an important generative tool for the artist.

The sonic artist and musician must be prepared to investigate the theoretical background of CA in order to successfully employ their vast behaviour space within compositional strategy. There is an extensive amount of mathematical and scientific literature relating to CA, however much of this is esoteric or difficult to understand. Important and accessible CA concepts are presented concisely in a non mathematical context to give sufficient background for the review.

There have been several approaches at applying CA in the production of electronic music and sonic art. Examples exist in the fields of overall structural composition, MIDI sequencing and sound synthesis/modification techniques. Applications from academic, independent and commercial sectors will be critically reviewed in an artistic, historical and technical context. This will provide the artist and scientist with a balanced view of this emerging field.

Virtual Music is about artificial creativity. Focusing on the author's Experiments in Musical Intelligence computer music composing program, the author and a distinguished group of experts discuss many of the issues surrounding the program, including...

Virtual Music is about artificial creativity. Focusing on the author’s Experiments in Musical Intelligence computer music composing program, the author and a distinguished group of experts discuss many of the issues surrounding the program, including artificial intelligence, music cognition, and aesthetics.

The book is divided into four parts. The first part provides a historical background to Experiments in Musical Intelligence, including examples of historical antecedents, followed by an overview of the program by Douglas Hofstadter. The second part follows the composition of an Experiments in Musical Intelligence work, from the creation of a database to the completion of a new work in the style of Mozart. It includes, in sophisticated lay terms, relatively detailed explanations of how each step in the process contributes to the final composition. The third part consists of perspectives and analyses by Jonathan Berger, Daniel Dennett, Bernard Greenberg, Douglas R. Hofstadter, Steve Larson, and Eleanor Selfridge-Field. The fourth part presents the author’s responses to these commentaries, as well as his thoughts on the implications of artificial creativity. 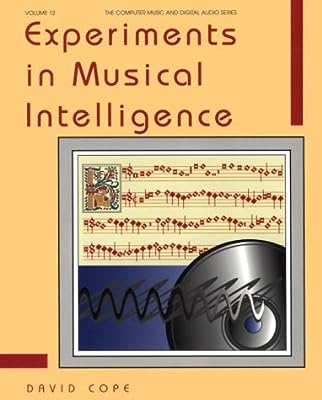 In this book David Cope develops ideas and concepts he already outlined in Computers and Musical Style (DAS 6), and describes the basic principles of analysis, pattern matching, object oreintation, and natural language process. Copye’s system makes it possible to generate new compositions in the styles of various composers, from Back and Mozart to Prokovkiev and Scott Joplin. The accompany CD-ROM contains the doce and documentation for the program SARA (Simple Analytic Recombniant Algorithm), which produced new compositions in the styl of the music in its database. The new introduction includes a detailed discussion of the new CD-ROM and how to use his Recipe for keeping the programming fresh and up to date. Contents Background and Overview The Analysis Component The Pattern-Matching Component The Object System The ATN Component An Application-Level Program and Sample Output Conclusions and the Future

DT1 is an interactive installation that employs flocking algorithms to produce music and visuals. The user’s motions are captured by a video camera and influence the flocks behaviour. Each agent moving in a virtual 3D space controls a MIDI instrument whose playing style depends on the agent’s state. In this system, the user acts as a conductor influencing the flock’s musical activity. In addition to gestural interaction, the acoustic properties of the system can be modified on the fly by using an intuitive GUI. The acoustical and visual output of the system results from the combination of the flock’s and user’s behaviour. It therefore creates on the behavioural level a mixing of natural and artificial reality. The system has been designed to run an a variety of different computational configuration ranging from small laptops to exhibition scale installations.

Computer Music and the Importance of Fractals, Chaos, and Complexity Theory
By Dr. Mladen Milicevic
http://recherche.ircam.fr/equipes/repmus/jim96/actes/milicevic.html

The main concern addressed in this paper relates to the postmodern vs. hypermodern use of knowledge based on scientific findings as applied to philosophy and the aesthetics of computer music.

Cellular Automata (CA) produce a diversity of behaviours and are an important tool for generative music composition. The aim of this paper is to establish, describe and evaluate a general CA composition process as a foundation for future work. Complex emergent behaviour is used to produce a composition, but the techniques described are universally applicable to other CA behaviour. Results are evaluated by recognised criteria. Reflections on the work will identify the discrete stages of a generativecomposition process with CA.

Eduardo Reck Miranda’s and Philip Galanter’s publications are worth a read. http://philipgalanter.com/research/

I think this belongs here: 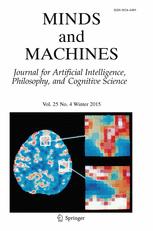 Emergence and Fundamentality in a Pancomputationalist Universe

The aim of this work is to apply information theoretic ideas to the notion of fundamentality. I will argue that if one adopts pancomputationalism (the idea that the world is a computer of some sort)...

A cool argument in defense of emergent phenomena as irreducible primitives.

That looks really interesting. Know of any way to read it that costs less than $40?

That looks really interesting. Know of any way to read it that costs less than $40?

which led to reading about livecode, Haskell (and tidal), and revisiting this art exhibit

Saw the following on Hacker News, I haven’t had enough time to go through it properly yet but looks very cool:

An illustrated essay on generative algorithms written by Anders Hoff.

Yes, I’ve been meaning to make some prints from these algorithms, thanks for the reminder!

A less philosophic work is the book Community of Variation:

In my forword to the book, I discuss how having a generative system and a forum in which ideas can genetically mutate as artists explore and learn from each other led to a great community of art.

I should probably put the text of the forward somewhere…

Kevin Kelly says, “One of the hallmarks of natural systems is that they exhibit a peculiar set of patterns which we all recognize but are hard to specify. The science fiction author Rudy Rucker calls this quality Gnarl. The way trees branch out is gnarly. So is the way water curls in a wave, or sand erode on a beach… Scientifically gnarl may have something to do with fractals, and fibonacci numbers, and L-systems, and spirals and other laws of growth.”

I should probably put the text of the forward somewhere…

if you do, i would be very interested in reading it. 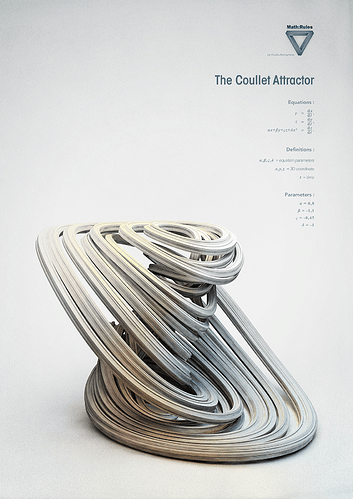 These remind me of some ceramic pieces I’ve seen.

Oh…just remembered: I have some abstract ceramic pieces lurking among the rocks on my hill; in vaguely similar, albeit less mathematical territory.

some time ago i’ve found a web page about chua circuit. they show similar forms with an oscilloscope. i’m sorry i can’t find the site. but i’ve found this (it may be even better, because there is sound !)

…make something which experiences, reacts to its environment, changes, is nonstable…

…make something indeterminate, which always looks different, the shape of which cannot be predicted precisely…

…make something which cannot ‘perform’ without the assistance of its environment…

…make something which reacts to light and temperature changes, is subject to air currents and depends, in its functioning, on the forces of gravity…

…make something which the ‘spectator’ handles, with which he plays and thus animates…

lets consider generative art not as something exclusively digital/algrithmic (and even technological).
how about graphical notation in music? a language without specified semantics and without ‘standardised’ means of interpretation using human experience and cultural/theoretical knowledge as a complex factor in the generation of its interpretation. and how about free improvised music/dance/painting/etc.
shouldn’t we consider all art to be generative? aren’t we generative art systems, set into motion with a certain set of rules given by education, culture, history, politics, media etc?

shouldn’t we consider all art to be generative? aren’t we generative art systems, set into motion with a certain set of rules given by education, culture, history, politics, media etc?

Yes. But it’s something to take note of that fact and emphasize it. 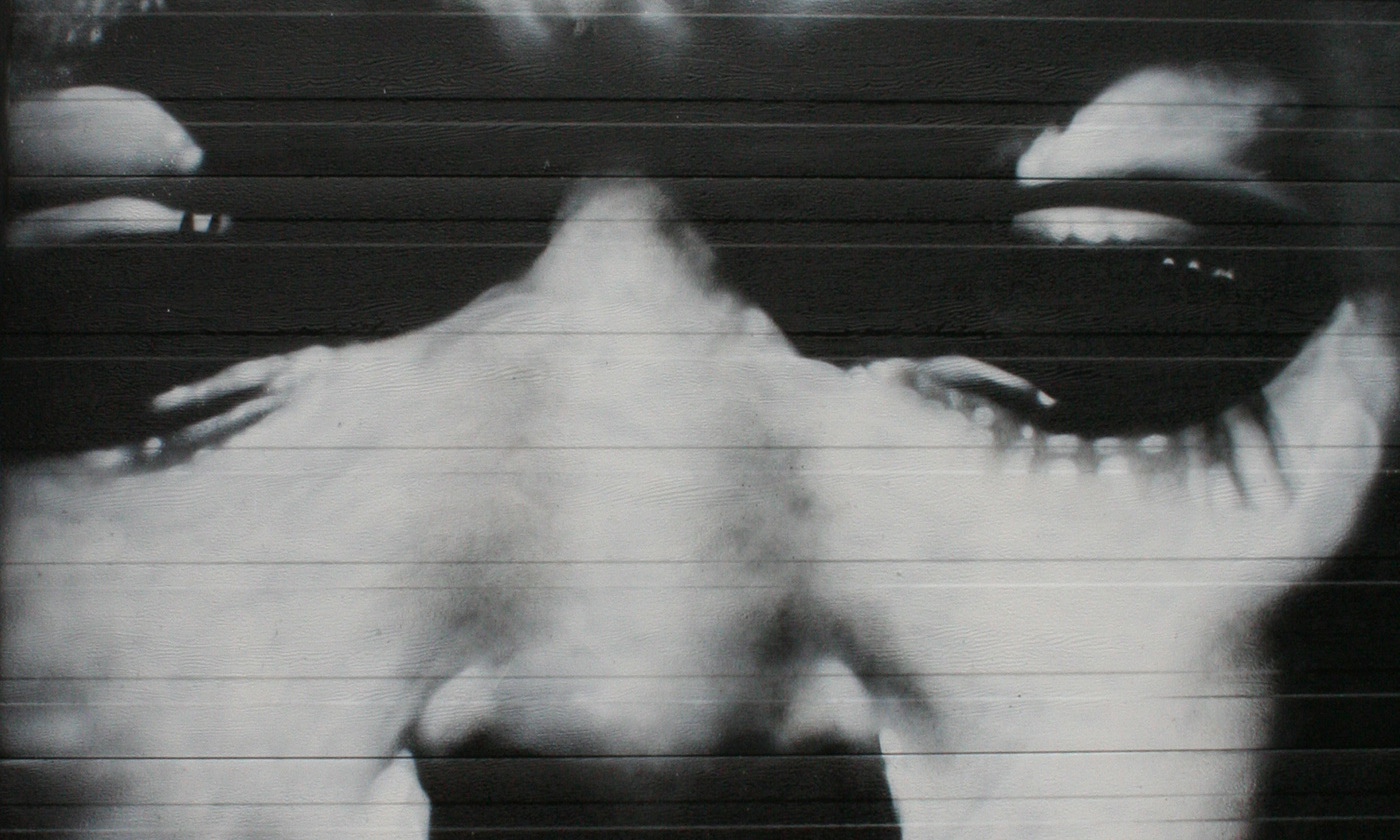 There is no difference between computer art and human art – Oliver Roeder | Aeon... Over the last 50 years, our world has turned digital at breakneck speed. No art form has captured this transitional time period - our time period - better than generative art. Generative art takes full advantage of everything that computing has to...