Hey all,
Just throwing something out there – I’m thinking about building some prototype eurorack modules that use microcontrollers (possibly for larger-scale production later) - my experience with analog engeineering is much less significant than my microcontroller chops. Do people know of modules that use them successfully? And do people have qualms about using them, aside from the analog purist standpoint?
In particular, I want to design interfaces specifically for performance and improvisation, generating CV to control other modules but not doing audio processing. Things like the meng qi voltage memory, which uses a seeeduino.
Thanks!

I imagine there are plenty of others, but the Radio Music is one example of a microcontroller based module that springs to mind. 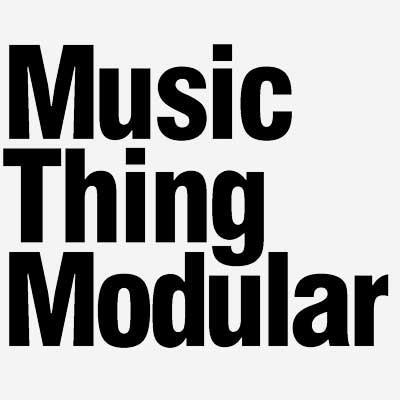 Virtual Radio module for Eurorack . Contribute to TomWhitwell/RadioMusic development by creating an account on GitHub.


@TomWhitwell is a member here. I’m sure he’d have some advice.

The only thing I can think of is ensuring that any modules can accept or output suitable CV ranges for modular use.

Qualms? None whatsoever. One of the most interesting developments in modular synths over the last 15 years or so for me has been the integration of digital technology with traditional analogue CV control.

i use an arduino nano for my PUSHER - module

Most of the Mutable Instruments stuff is digital, based around STM32 microcontrollers. (Older modules - notably Branches and Grids - are Atmel based). All the sourcecode for MI modules is open source.

See also Ornament and Crime, based around a Teensy, and also entirely open source.

And of course, all the Monome modules such as Ansible are microcontroller based and open-source. (I point to open-source examples simply because there’s more proof than ‘look a microcontroller’). In fact, most digital modules and sequencers out there are built around a microcontroller - things like the Pamela’s Workout or Make Noise Rene.

This is also useful for clarifying: it’s the chip that is the microcontroller, not the board it’s on.

Personally, I’d advise against “bolting a devboard/Arduino onto the back of something” if manufacture is your goal; it’s a very expensive and phsyicially large way of achieving a goal. Arduino is very handy for sketching ideas in, for sure, but it’s not really the same as a production board. This approach does make more sense for DIY projects, as it exposes the hackability of the object nicely, and allows people to prod with things they might already have.

For instance, I’ve got one prototype that began on a bench as Arduino, got into my rack with nothing but a bare ATTiny14 on the back of it, and I’m now redesigning it all around a Silicon Labs EFM32 - the learning curve is slow but not vertical, but the path to manufacture - around a single QFP48 chip and some caps - is much clearer, and the capacity of the board much higher.

If you’re interested in generating CV, O_C is a good thing to look at - it’s using a 3.3V microcontroller to control DACs spitting out higher voltages, which is going to be a key part of CV generation.

Radio Music is based on Teensy. Just like Ornament and Crime, Temps Utile, and, if I remember correctly, Malekko Varigate8+, and surely many others.

Orgone Accumulator is another that is teensy-based.

The TELEX Teletype expanders are Teensy-based.

Thanks everyone, this is great, super inspiring.

Amazing, thank you! My imagination is going wild.

nw2s::b and equation composer are arduino due based, and both are open source.

You may want to look at the Teensy Audio Library, and their Audio Adaptor board.

A new series that reviews 21 different microcontrollers — all less than $1 — to help familiarize you with all the major ecosystems out there.

Thanks, Jason! I just got a residency in upstate NY in February to work on developing some of my ideas. Seems like this might help me with research and planning.

I’d like to try building an arduino based eurorack module to experiment with.

Does anyone have any experience with this? I’m looking for a kit or project to get started.

I’m not sure of any specific modules but here are a few development platforms that might interest you:

Here’s a euro-centric version of a teensy dev platform, but I cant vouch for it’s quality as I’ve not personally tested it: https://1010music.com/product/euroshield1

You might also look into these for arduino specifically(I also cant vouch for these):
http://20objects.com/ardcore/
http://circuitabbey.com/EuroDuinoKit.html

Thanks for pointing this out. I have o_C and a Temps Utile. These look like they have an arduino or similar chip on the back. Seems it might be possible to program these for other uses… will have to do some research.

So yeah. The micro-controller there on the o_C and Temps is a Teesny 3.2.

The o_C code is pretty inscrutable. I’d suggest maybe looking at the alternate firmware “Hemisphere” here https://github.com/Chysn which also has some arduino projects you might find useful.

For a full kit, including Arduino, that’s very straightforward to reprogram, check

the maker of “hemisphere” for o_C seems to have spent a bit of time writing tutorials on programming for it. check out the archives here:

Ornament and Crime: ...But Mostly Crime

Reflections on one developer's experiences with navigating the ins and outs of creating new apps for the Ornament and Crime Eurorack module. And perhaps some helpful tutorials along the way.