this thread is the general place for folks new and old to discuss eurorack, get advice, plan systems, ask questions, and learn more about this modular format.

Hi, I’m a complete newcomer to the modular world and was wondering if you guys could tell me where I’ve gone wrong before I spend my money on modules. I plan to sequence this with my SQ-1 and Keystep, and I’m looking to make more ambient music.

BTW I already own the Mannequins modules.

Personally, I use my uScale a lot less since getting the ornament & crime. Perhaps that space could be saved for something else. It’s a great quantizer though for immediacy. Mangrove and dixie make great friends and you’ll be able to get a lot out of the two. Maybe the uScale and uVCA could be swapped for a quad/hex vca of some sort. Will probably open a few doors. I’d be tempted to swap the dual adsr for a couple of pip slopes or something to save some more space too (I’ve never used the dual adsr though, could well be awesome).

Hey there and welcome! Can’t go wrong with the mannequins modules you have - there’s a lot of fun to be had with just those three. My first impressions would be to get a uO_c (8hp instead of 14hp), and ditch the uscale since it would probably be redundant with the O_c. Also, the dual ADSR is probably overkill, and personally I find AD modules much more useful but that may just be a preference. You may want to listen to the sound of a low pass gate like the LxD, Optomix, etc - can be really great for natural sounding ambience. And speaking of ambience, you need effects! Maybe pick up a uClouds (or wait a few weeks because I suspect Mutable is going to be releasing a lot of new stuff very soon). A common misconception when starting out is that you need an output module, and maybe you do want one, but you by no means need one and I’ve never used any - you can buy cables that are 1/8’’ to 1/4’’ and just go straight from your modular into a mixer if you use one. And all that being said leaves 14hp of space - the perfect amount for my favorite module Just Friends 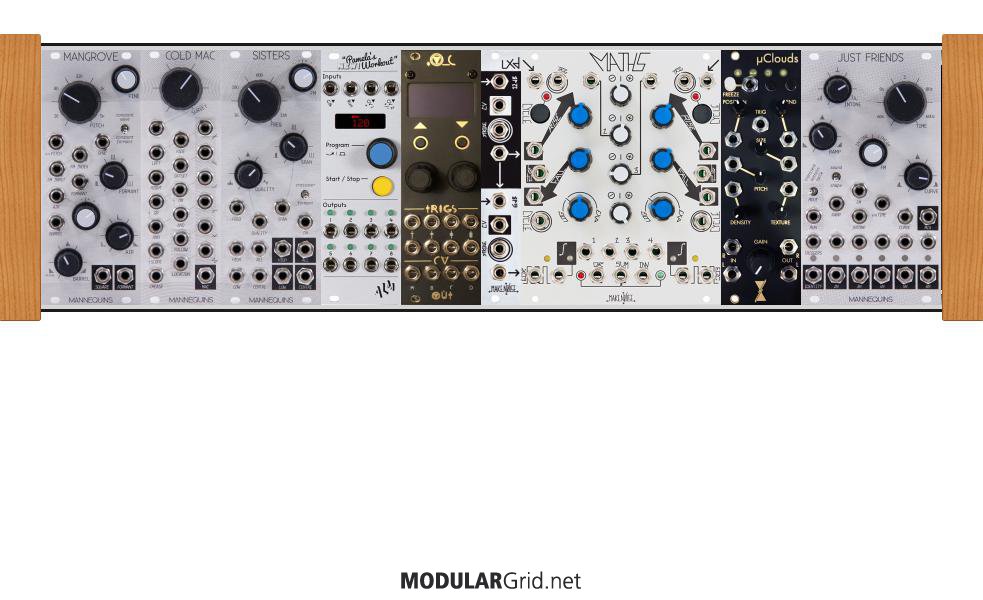 Oh wow thanks so much. Any chance you could explain what Just Friends is because I’ve watched demos but never really understood it.

It’s definitely confusing at first and the Mannequins documentation can be a little cryptic. It’s a very multi-functional module kind of like Maths. It has two switches which switch between different modes. There is a jack which unlocks a variety of other more esoteric modes, but ignoring that for now, it’s basic idea is as follows: it can generate a bunch of rhythmically related envelopes based on triggers that you feed it which you can shape with the black knobs. It can generate 6 LFO’s of various shapes and rhythmically related times. And it can also be a killer oscillator with 6 simultaneous outputs which can be sinewaves, saw waves, triangle, square - anything you can shape up really. Coolest of all is that you can adjust the pitch relationship between the 6 outputs, giving you chords or fat detuned unisons. It’s also really fun to make FM sounds with - here it is making bell-like sounds by being modulated by a simple sine-wave from STO:

At first this all seems like a lot and there looks like a lot going on with the panel, but once you grasp the idea it operates in a very simple and beautiful way. There’s a great thread about it around here somewhere that may be worth reading for more info and ideas!

Very Very cool, will have to think about it. With that rack what would the Maths be used for? Still don’t really understand that module either haha.

With that rack what would the Maths be used for? Still don’t really understand that module either haha.

time for a birds-and-the-bees speech

So, I think one of the core things to wrapping your head around modular is getting away from specific-uses-for-specific modules. Obviously some modules do have a single use, but most don’t have to.

so what Maths does is: it has four channels of IO. Two are attenuversion. Two are function generators: they make a voltage rise and then fall. You can control rise/fall with voltage if you like. Optionally, they can cycle.

In reality that means: a single Maths function channel could be used a bit like LFO (because a cycling, rising/falling voltage, is an oscillator). It could be used as an AD or AHD envelope (because a triggered, rising/falling voltage, is an envelope). The attenuverters are really useful because you always need utilities and two VCAs and a Cold Mac still possibly isn’t enough.

You might argue you have LFOs in the Workout, but: they are all tempo-synced, and none of them are CV controllable. You could argue you have envelopes in the OC but they’re not exactly manipulable. And I’d also say, in my opinion, that ADSRs are not always very interesting.

The other things Maths does is, well, more. Because of what it is, it’s daft to call it an “LFO/envelope”. It can be a clock source; a clock delay/offset; it can act as a very strange filter, or a (non-tracking) VCO; it can be a clock divider. It’s a very generic set of tools that can be applied in many ways.

So the answer to “what does it do” is, well, it depends. The point of modular is that you’re free to change the architecture of the synthesizer with every patch. So in one patch, Maths might be a wonky weird clock; in another, it could be a plucky delay envelope; in another, a modulation source for a VCO like Mangrove.

Should probably follow that one up with an obligatory VCA rant, here’s a new one: https://www.youtube.com/watch?v=JKqcQxLjno0&t=0s

Would the forum be better served by a single thread for new Euro questions? There is a lot of overlap in this sort of thread, and I think a more general ongoing conversation could be more helpful to future newcomers.

Yes. Maybe a mod can merge threads and keep an eye on this?

+1. Whilst there’s a lot of Euro and modular chat around these parts, there’s a ton of non-Euro/modular musicians here interested in technology beyond patch leads, and I think keeping Euro neatly coralled makes sense.

i think it’s awesome that so many new users are coming to lines for the good vibes and thoughtful conversations and i think interaction should definitely be encouraged. a lot of the appeal of lines to me when i first found the forum was the content being a stark alternative to most other internet hubs as well as where topics are very nicely organized and there being a place for every kind of discussion… and if not, someone makes one!

Perhaps a general advice thread that is turned into a pinned Wiki page in this section?

I tried to look for something like that but couldn’t find a thread like that. Btw I love your music and it’s actually the reason I’m getting into modular haha

good idea. done. turned into a sticky thread pinned to the Equipment category. a one-stop info shop for overlapping newbie questions would be very beneficial. thank you all for your suggestions!

I’ve got a newbie kind of question that’s been on my mind actually. How many / What ratio of envelopes to voices/things to people feel they need?

I guess that’s a bit vague but I always feel like I’m wanting more envelopes than I have. I’m getting down to the “ooh I better think hard about this last bit of hp” in my rack (https://www.modulargrid.net/e/racks/view/616673), which I don’t want to have to expand (again). I feel bad having to use up maths channels and really avoid having to use the o_c or disting for simple envelope work as they’re usually used for something more interesting.

pls feel free to message me if you wanna talk about any of it!

I’ve got a newbie kind of question that’s been on my mind actually. How many / What ratio of envelopes to voices/things to people feel they need?

I do not use envelopes for volume control that often (and I guess many people are in a similar situation now more than even a few years ago) because there are more and more :

So, non-looping envelopes are less useful for me most of the time. They obviously still have their uses beyond controlling volume through a VCA but that’s one of their most typical use and it’s less relevant for me.

oh yeah, i also wanna just say for what it’s worth, a 2hp dual low pass gate is the only dedicated VCA in my rack. i use rings and plonk and things like that a lot, but generally i only use a traditional envelope/vca setup for whatever voice my mangrove is doing.