This Mylar Melodies video on VCAs is useful:

Also this video where he plays around with BIA:

Is there any reason not to merge this thread with the New to Eurorack thread?

You just plug OP-1 into ansible and ansible translates the midi from OP-1 into cv and gate? Is there a special mode for this (is it traffic)?

Hello everyone by the way, first post! (And yes, merging with New to Eurorack thread sounds like a good idea.)

The Ansible is really good about detecting what is plugged into it. When I plug in my OP-1 is automatically switches to one of the MIDI modes. Be sure to look at the documentation. There are some different polyphonic and monophonic modes. When I plug my OP-1 in the Ansible defaults to a mode that shifts the gates/cv through each pair of outputs. Usually I just want the ‘normal’ monophonic mode, so you have to hit the config button a few times.

But back to the point, the Ansible seems pretty good at autodetecting what is connected.

just a heads up:
I closed (no new replies can be posted, but the content remains visible) New to modular, feedback/suggestions on first eurorack setup? and New to modular, system advice needed, citing this Sticky thread as the main container for this topic. merging those two threads into here would’ve been a visual nightmare, so this seemed the lowest impact solution.

Ansible MIDI/CV is fairly straightforward - the various mapping modes cover a few defaults, everything from four channels of CV+Gate to round-robin poly or one channel with Velocity/Aftertouch/Sustain/Clock/etc.

It’s very much a nice-to-have - it’s expensive for a pure MIDI-CV box and the key attraction is the grid/arc applications in it. But it makes it really nice to just whip out a midi keyboard and play my synth like… a synth. Although: not my stupid Korg Micro 37 because it has a hub in that means it doesn’t work with Ansible.

I also have a CV.OCD which is superb, and perhaps a better fit if you’re interested in applying multi-channel sequencing to the modular - four CV channels + twelve trigger channels; it works well with multi-channel sequencers, and has masses of configuration via sysex - you can spit out clocks, gates, triggers, clock divisions, CV, the works.

Thank you @infovore and @jakecarter. I’ve been looking at grids and being more interested in using it with the modular than with the computer and so I started looking at Ansible. I saw that it has a midi mode with various “allocation styles” but somehow didn’t realize that meant it would understand sequencing from the OP-1.

I have one more Ansible-related question – apologies if it’s been answered elsewhere – are there other grid-applications for Ansible in addition to Kria and Meadowphysics? (Or is this where the Teletype comes in?)

The Korg Microkey 37 has a two port USB hub inside it, and it basically functions as a hub with a keyboard hardwired to it. Ansible does not like hubs being plugged into it (understandably, fwiw).

There are currently only two grid apps for Ansible, yes; a third (a rework of Earthsea, if you know what that is) is reasonably far along but not finished.

Thanks for this @infovore.

I kind of understand what Earthsea is (and that they have, or had, their own modules, these apps – Meadowphysics, Earthsea and White Whale – which Ansible is a kind of culmination of, if I understand it correctly, with Meadowphysics and Kria (a version or development of White Whale?) living together in it, and also in the future, I have now learned, possibly Earthsea!)

Ansible is more than I first understood.

If having the same functionality as a module is interesting to you also check out this one: http://www.hexinverter.net/mutant-brain

20 char of thank you @papernoise!

I’ll try to clear up some of this if I can for you.

What’s the difference? If I am sending, say, gate from Pamela’s, doesn’t “tempo sync” effectively mean cycle reset? I’m thinking of, say, the case of using an LFO to modulate some parameter on Three Sisters in time with a beat.

Reset sets the LFO cycle back to zero, interrupting it. Rate of LFO does not change. Sync changes the frequency.

If I’m understanding correctly, output 3 will be 180º from output 1, meaning a mirrored modulation. So by “channel’s amplitude” it means attenuation, right? What’s the musical application for this mode?

It has to do with the bipolar voltage that the Batumi puts out. +5 vs -5 for example. Which direction is your modulation adjusting a parameter on another module, for example.

Sure, but how am I to infer this from the blinking LED on the slider? Again, I sort of feel like when I’m nudging the sliders around I don’t really understand what’s happening.

The divisions are in relationship to the rate of the 1st slider on the left.

If you do not have an oscilloscope, do you have a MOTU interface?

I am getting a Digitakt pretty soon and I’m hoping to sequence MIDI (on ideally more than one track).
Does anyone else use their Digitakt to sequence and if so do you have a preferred module to receive multiple midi tracks?

Don’t have a digikat but I’m going for Mutanle Instruments Yarns, 4 channels of cv (or less + more controls), plus built in arpegiator and Euclidean rhythmic generator.

I ditched my Mutable Yarns and got a Polyend Poly, which I love BUT is extremely unconfigurable.

I found that messing with configuring Yarns each time before a session was an impediment to just turning things on and immediately working, and the Poly with only three options to speak of helped fix that mental block. 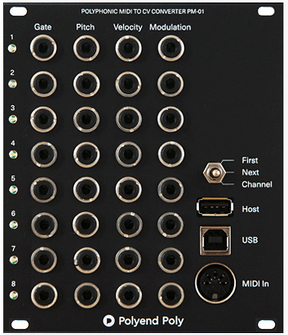 its worth checking out the bastl 1983 that was just announced. looks neat, smaller than yarns and no sequencer, but has a note buffer and a few other interesting features like maintaining tuning across octaves.

I thought briefly about setting up my E370 for polyphony. Polyend Poly’s lack of configurability is part of what kept me away from it. If it had a mode with 4-voice polyphony and 4 mono voices that would have been useful, but I really don’t need 8 of either one.

I’ve been using a CV.OCD, generally configured for 3 voices, one of which has velocity. It’d be nice to have 4 voices with velocity and mod wheel or other CC. But I’m doing less with MIDI these days anyway.

Hexinverter’s new Mutant Brain looks like CV.OCD in a module with some handy extra LEDs, and the Bastl 1983 also seems promising.

I currently use a Yarns with my Machinedrum and it is very solid. However, I think if I was starting again I would most likely grab an ExpertSleepers FH-1 and a couple of expanders. Yarns is nice, but it is set in its ways (I know I could write custom firmware for it). The scriptable nature of the FH-1 appeals to me a bit more.

Carl Mikael runs an fh-1 with a bunch of elektron stuff.

i have to chime in here to vouch that the endorphin shuttle control is good for digitakt integration, amongst many another scenario, but specifically digitakt.
i use it live and i love it. i haven’t ever gone nuts with assigning CC lfo trigs but as i wrote this i realized i could. for some reason it never made sense. i just thought like OH YEAH COOL BRO U SENT AN LFO, but then just realized you could have a different CC value per step, random, probability, and your whole gosh dern setup config in the shuttle can change by plugging your gol dern phone up to the thing (usb).

i had yarns it was good but not this good. i tried others, just feel this one is best. you can use it as enough power for 6u as well. have a usb lamp live. BE A COOL USB PERSON.