Are you building from scratch or do you have some of the modules already?

I have one row currently: Maths, LxD, the Mannequins minus one Friends and minus one Cold Mac, and the Monome.

Hi all, can I ask a question about the morphagene? I’m wanting to add some kind of sample-playing/found-sound elements to my set-up. The morphagene looks like it would be a lot of fun but I’m a bit worried about the UI. I briefly had a Tempi and found it difficult to remember the various button combos and colors. The morphagene appears to have a related UI philosophy but I’m wondering how much memorizing comes into practice when playing? I’m also considering a 301 or a radio music (seems like one could get pretty far with just reset and start time). I’m imagining (at the moment, but who knows) that I’d mostly use it with samples and sounds I’d collected while away from my studio. I’d like it to have a lot of cv modulation possibilities but also a decent amount of precise control (I’m sequencing with a er-101 and a marbles mostly).
So, my questions are:

Having owned a radiomusic in the past, and now owning a Morphagene, I can say it is leagues ahead in almost every way! For me the key to Morphagene is the ability to resample and record your manipulations of a sample into a new splice and then go on to further manipulate this.

Once a reel is loaded the interface is very straight forward with everything you would want to do accessible from a single knob or button. I find the button combos are only really used when managing reels/splices, at which point the creative flow is normally broken anyway and it’s not too much of a problem to check the manual if I’ve forgotten something.

I’ve been using Morphagene since its release and I never realized that “record into new slice” allowed you to record your modified recordings. Looks like I have a bit of experimentation sheaf of me tonight!

I definitely agree regarding UI: button combos aren’t an issue while actually playing with sounds. Manipulating sounds feels entirely intuitive to me.

this cheat sheet should be all you need (might have been posted here at some point but I couldn’t find it):

Re UI - I’ve traded my Morphagene, but I think about reacquiring one often. During the months I had it, I found it hard to keep the combos straight, but there aren’t as many as Tempi. I’m sure you memorize them eventually, but I do not think they are intuitive. As noted by others, once you’ve got it setup to do what you want, it’s a pleasure to use.

I own a QCD and I am considering acquiring a SISM.I understand I can connect the 8-pin ribbon cable from the CLOCK-OUTS header on the QCD, to the INS header on the SISM:

1.Will the four outputs from the QCD be output on both the QCD OUTS and fed to the SISM at the same time?

2.Will I be able to connect QCD, QLFO and SISM at the same time, via headers?

3.Beside the Sequencer idea patch described in the SISM manual, what other uses could the two modules (QCD and SISM) connected benefit from?

1.Will the four outputs from the QCD be output on both the QCD OUTS and fed to the SISM at the same time?

Yes, this is basically just like multing all 4 outputs. I’m not finding a schematic for the SISM but 4ms publishes schematics for the QCD and some other modules that use this header, like the QPLFO – this connector more or less just skips over the output/input circuits connected to the jacks.

2.Will I be able to connect QCD, QLFO and SISM at the same time, via headers?

I don’t see why not, but you might have to make your own 2x4 ribbon cable with multiple connectors. This is doable with pliers and super easy if you have the right crimp tool.

3.Beside the Sequencer idea patch described in the SISM manual, what other uses could the two modules (QCD and SISM) connected benefit from?

Dunno! I had somehow missed this module but it seems really cool, I love the QCD + expander. Seems like you could use the combined outputs on the bottom to make some nice stepped CVs that change value rhythmically (guessing this is the sequencer patch in the manual). With a QPLFO patching back to the SISM this seems like a way to get some really interesting CVs going on, keeping everything locked to the rhythm(s) defined by the QCD.

Wasn’t sure whether or not to post this here, or in the Verbos Harmonic Oscillator thread, but here we go:

I’m having an issue with my Verbos Harmonic Oscillator. The oscillator seems to work fine at first, but after about 20 minutes of patching it stops producing sounds, and only outputs a faint high pitched hum/noise. If I switch off my case (which has an Intellijel TPS30 power unit) and let it sit for a few minutes, it begins to work again. I’m not really sure what’s going on here… Is the module faulty? Is it overheating somehow? Am I overloading my power supply?

Here is my current setup, for reference: https://www.modulargrid.net/e/racks/view/985434

Has anyone experienced any issues like this with an analog oscillator?

Well you are running at 99% of the power rating for that power supply on the +12v. The general recommendation is to leave 1/3 of headroom. Try unplugging a bunch of stuff and see if that solves it, if so, you need more power. Either way, you probably need more power.

Thanks, will try moving some modules into my skiff!

I’ve been listening to some demos (Robotopsy x2 on YouTube) and reading about the Hertz Donut mkIII… kind of fixating on it, deliberating a purchase/trade. I’m thinking about replacing both a Loquelic Iteritas and an Akemie’s Taiko with the HD, as it seems to (?) cover much of the sonic terrain of those two modules. Right now just kinda fantasizing on it, thinking it’s an ideal sort of complex FM oscillator, though it seems to have a definite idiosyncratic (noisy, dirty-sounding, digital fm/phase distortion) character.

I’m wondering what I might lose by forfeiting the LI and Akemie’s Taiko (besides the ability to use them simultaneously) … I’ve come nowhere close to exhausting their combined or individual potential. Anyone care to share their thoughts / opinions on the Hertz Donut mkIII? I do like using both the LI and the AT for tonal/atonal percussion as well as for the sustained, well-modulated, legato sounds of the LI… just thinking the HD might offer more timbral variety, characterful percussive clatter, and super-sounding, sustained (drone-type) sounds, as well as potential for further, external frequency modulation (add’l ‘operator’ capability?) … any thoughts are welcome

I’m still undecided about whether I prefer the mk2 or mk3, and would have to try them side by side I think.

The mk2’s unmodulated sines are dirty, aliased and characterful without being harsh. Its FM sounds really good, and it’s very immediate and easy to use, one knob per function etc. It’s got a sine/triangle/saw switch which also affects FM, and a square output too. The “waveform discontinuity” shaper is pretty bad, though.

The mk3’s unmodulated sines are super clean. The waveshaping is much better. Having one more modulation oscillator and the hybrid mod matrix/bus gives it superpowers – it can imitate the mk2’s noisier core or get more in Noise Engineering territory. You can also use operator A as a second carrier, which can sound pretty great in stereo; you can separate its pitch control from the primary and use it independently.

The mk3 can get much busier/crazier than the mk2 if you want, but both of them are also good at gentle and pretty. In their brighter ranges, they make excellent LPG food or percussive sources.

There are times when something tells me there’s something about mk3’s FM character I don’t like as much as the mk2’s, but it could be nostalgia lying to me, so I’d have to try them side by side. I’ve definitely hit some mind-blowing sweet spots with the mk3 though.

In my effort to find the most useful envelope VCA combo, I’ve picked up a Streams. My first impression is that it will take a bit to understand what is happening with each model. Does anyone who has spent time with the module have any tips?

(For more context, my setup primarily generates streams of triggers, so my “gate” lengths are short. I’ve found the VCA volume know to behave quite differently than something like my Tangle Quartet, which was a bit surprising.)

Not really a eurorack question, but: does anyone know where one could buy the sorts of heavy duty self-closing cardboard boxes we tend to ship and store modules in? I have a number of DIY modules as well as second-hand modules sold without boxes, and I’d like to store and ship them properly. I’ve been googling a fair bit and I haven’t zeroed in on this sort of box yet. 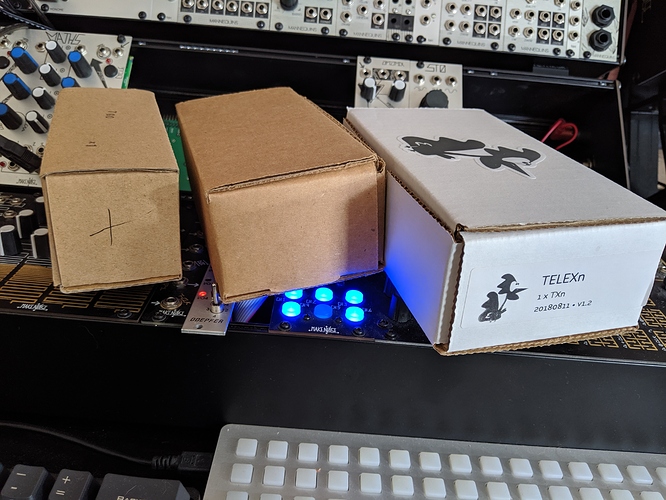 @voidstar for example, what does WR use for its boxes? RIP, Cold Mac, Three Sisters and Mangrove all (used to) come in a heavy brown cardboard 7 x 3.5 x 2.5" box. I’m not finding what corresponds to these on ULine, but I might just not have the right classification.

‘Reverse tuck’ doesn’t seem to match, nor do any of the ‘retail’ boxes.

Also, if there is anywhere that sells these in quantities of 100 or so rather than 500, that would be keen, though I understand WR is going to be more concerned with bulk