I believe you are looking for the “mailers” category.

Didn’t want to ask this in the complex oscillator thread as I didn’t feel it added anything to that discussion (of course, feel free to move as appropriate).

I’ve decided to make room for a CO and am stuck between Cš-L and DPO. I’ve had twenty solid minutes of experience with the DPO in a shop and enjoyed messing about, but have heard some fun stuff made with a Cš-L.

I’m currently using a Rubicon/Dixie/Ultrafold combo and will be adding the CO rather than replacing. Am I wrong to believe that my current combination could come closer to the sound of the Cš-L than that of the DPO?

I’m definitely interested in some of the more abrasive applications, but would like the flexibility to use the CO in a tamer manner as well.

i don’t have the experience to answer you, but maybe the hertz donut mk3 would be worth checking out – i messed with it a bit at the shop and was loving the sound of it felt like it was worthy to be in the discussion alongside the DPO (which i also don’t own and only tried for 5 min in the shop lol). I mention it because the digital and thru zero aspects to it may make it easier to “tame” when you want that. @Starthief has a post just upthread a bit with their take on the mk3

TZFM is generally easier to work with, in that it doesn’t affect the perceived pitch (except the octave). With the DPO once you’ve got the expo FM timbre that you want, you need to carefully retune both oscillators to transpose it where you want it without losing that timbre (the Follow circuit doesn’t pay any attention to the primary VCO’s pitch knob, just the V/OCT input).

In terms of “tame” in a more general sense, the DPO requires a lot of restraint. It felt more prone to wildness than any other complex oscillator I’ve tried.

HD mk3 sort of defaults to well-behaved, but wild isn’t far away when you go looking for it. It does lack triangle, saw, square outputs but has phase modulation instead, which can reach some other shapes but tends to work differently with FM than oscillators that have those outputs natively.

In character they’ve all got different flavors, so I would hesitate to even guess at which would sound more similar or different to Rubi/Dixie. The one comparison I feel comfortable with is saying that Hertz Donut is a lot like Madrona Labs Aalto’s oscillator section, through part of its range… they can diverge pretty far though.

Has anyone here used Pam’s and Tempi together?

I’m getting weird phasing issues I’m not sure how to sort out. I’ve got an output on Pam’s providing clock and reset to multiple modules (Grids, Launch Codes, Tempi). I’ve got a “on when running” going to Tempi to act as a reset on the mod gate. At slower tempos I didn’t notice it, but when I sped things up, faster trigger streams (which I’m combinging from Tempi and Launch Codes) are out of sync. I’ve found triggers from Pam’s and Launch Codes to work fine, but for some reason Tempi seems off. I’ve tried messing with the phase on Tempi and got it better, but it’s still “off”.

I anyone has done this and has tips, I’d appreciate them.

Not sure this helps, but… My Pam’s (original, not PNW) and Tempi hated each other. Acted quite strangely if connected (e.g., Tempi clocked by Pam). Drove me crazy, drove me to a Gatestorm (which has actually served me fine, but I would’ve preferred the PNW, which didn’t exist, and Tempi combo). Perhaps an impedance mismatch? I didn’t understand at the time, and wish I’d run a test with a buffered multiple between the modules.

Occasionally some channels of Tempi go out of phase over time. A “reset” by changing state in sync fixes this in my case (it works manually or via CV).

Morphagene will get you into beautiful soundscapes almost effortlessly. This is the right choie.

Do you keep the boxes for your modules?

I had been doing so - partially because I thought it would make selling unwanted modules easier. However I’ve realized that for some of my favorites, like Mannequins, I can’t really imagine ever selling them - and so holding onto a bunch of empty boxes seems silly.

The boxes are nice though

I keep them all. I’ve sold some modules I thought I never would (regretted a couple, but not others), and I’ve also used some to ship other modules that didn’t come in proper boxes.

A couple of people have asked “do you have the original box?” but I don’t expect many people would base their buying decisions based on that.

I like the box - I think I’ve asked @Starthief that question in fact (SBG!

) - but if it’s something I am interested in at the price it’s offered at, I don’t let a lack of box stop me.

Unless space is at a premium in your place, I think it’s respectful of a future buyer to keep the box for them. It’s creates something of a more complete experience of the module, and also may help them if they decide to sell the module in turn.

Current you could view this is a favor to future you. You don’t know that you’ll always want to keep a module, even if you’re in love with it now.

I generally don’t keep the box because I live in a smallish apartment.

Boxes. To me it’s a matter of costs. I have 50% of import taxes, so I buy hardware through an importer to save a little on shipping costs but more importantly to have it easier if a malfunctioning piece of equipment needs to be sent back to the manufacturer. And so far, none of the importers I’ve come accross in the music community here ships with boxes. In consequence, most of the tiny second-hand market here goes unboxed. So the reduced reselling capabilities are insignificant. I like boxes, though.

I’m a box keeper. I am also disappointed when a module doesn’t have it.

Though honestly it matters less with some manufacturers. Make Noise, Intellijel, Noise Engineering, WMD, etc all use generic mailers with stamps on the outside.

ALM, TiNRS, Erica, Mutable, Mannequins, Monome, Rabid Elephant, and others on the other hand do a lovely job with creating a nice experience in their packaging. I also, for better or worse, have a more positive feeling for their modules than I otherwise would.

this is also true for me.

and as a 2nd band buyer the box doesn’t matter for me at all.

The very reason I shouldn’t keep the boxes, but… 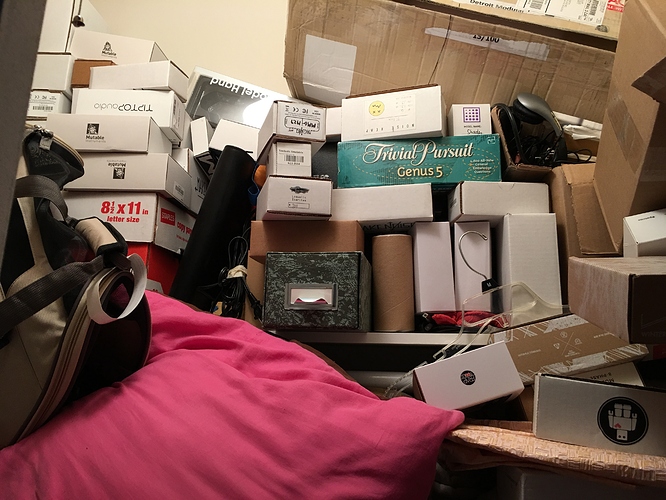 That’s a closet. They aren’t out in the open.

I want that closet back.

hi! is there anyone here located in the Boston area who can do surface mount soldering? I have to replace some fried IC’s on a Tyme Sefari MKII but I don’t have to skills or tools to do so, if someone can help I would be happy to compensate them for their time

No idea of your apartment size…I live in a ~600 ft^2 place, so not too small by some city standards. I keep the boxes in bins under my bed.

Not keeping the boxes is of course a legitimate lifestyle choice

I got rid of the boxes ya’ll - in the name of a simple life and reclaiming closet space.

I kept the box for RIP though, of course.