Oh, good point! I usually have a guitar pedal PSU and my amplifier on at the same time. I think maybe having pedals on might be too much?

Try turning them on separately. My understanding is that when things power on, there is a spike of current draw that is much larger than their steady state draw. So if you power on too many things at once it can cause issues. Try turning on your 7U first, by itself, and if Marbles still has the issue. If that fixes it, try turning on your amp and pedals and I bet it will continue to work.

Well, I always have the pedal PSU on, but yeah, I get what you mean. Thank you!

I got around to putting all my modules in a single case (for the UK DIY Synth meet)… west coast, east coast and Hordijk voices… 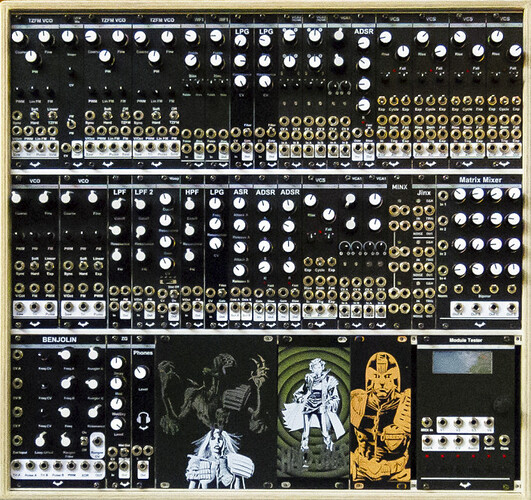 WMD just announced they’re shutting down at the end of the year.

Hey fam, We at WMD are so thankful for the support you have given us over the past 17 years.  We’ve been making gear that has pushed the boundaries of electronic music, that’s made its way into the rigs of incredible people we respect, that has...

I fear there’s a coming bloodbath.

I just came here to post this in the scarcity and precarity thread. I was also wondering if there’s a coming bloodbath, as you say. Doesn’t WMD handle manufacturing for other modular companies as well?

Dag. That’s such a downer to hear. Like @renegog said, not only do they do their own thing but I was under the impression that they built for several other brands. I think I recall them saying they had their own pick and place which is not attainable for most companies.

I wonder if the big guys like Make Noise have enough to carry them through all this and the little guys who do it almost as a hobby will scrape by because of their little / no overhead. Everyone in the middle could have a tough time.

I loved my Synchrodyne and Expand. I think of them fondly from time to time, maybe I’ll have the pair again someday.

Such a shame to hear about WMD and hope that the remaining euro makers are doing ok.

It would certainly be interesting to know about other makers that may have been having their stuff manufactured through their pick-and-place machine.

I found this interview with William Mathewson that goes pretty deep into the detail of their pick-and-place manufacturing:

The loss of WMD is awful. I’d resisted buying WMD modules for some reason—then I picked up a MSCL and a SCLPL. The build quality is second to none. I have a long list of WMD modules i want to pick up that i’m probably going to delay upgrading my 2015 macbook pro for.

I really don’t know what I was thinking, except possibly I overlooked them for being too “basic”… when the reality is their design philosophy is fucking on point. The Javelin for example is just what i’m looking for in an envelope, but the Accent input is like this tiny tweak that just solves any need to replicate MIDI drum velocity without a bank of extra vcas. WMD has an incredibly mature, informed design approach to their modules that deserves more appreciation.

I really hope they don’t sell their work to any larger companies. ultra-capitalist consolidation is nasty shit.

This is random, but has anyone come up with faceplates for any output modules that match the Mutable stuff? It’s odd they never released any proper output modules to complete a system.

I ask this seriously, and in good faith: would it be worse for Behringer to produce the modules than for them to not be produced at all?

Depends on how you feel about private equity I guess.

Historically the end-product rarely gets better when the financiers demand their two and 20. It’s hard for a company to get trashier faster.

Somebody with a keystep can give me an insight?

If i want to use keystep for one midi synth but have keystep sequencer slave synced to my euro sequencer (monome earthsea), will this force the keystep into the free running unquantized timing of my euro sequencer? Basically it would another pattern to my sequencer in my understanding, correct?

If all that works, cool. Saves me cv to midi and grid /usb switches = headache.
If so, i wonder if this messes with polyphony (dont think so) and how useable the extra cv/gate out would be. Like is that extra sequence pattern in the Keystep available as cv/gate out aswell and/or only playing on top of the sequence pattern?

Ahoy, friends. I’m putting together a live performance setup with a Digitakt, Eurorack, and Kaoss Pad. After a few rehearsals have found that I really would like some way to hard-stop some or all of the sounds coming from the Eurorack to facilitate a few hard-cut transitions where my hands are occupied with mute groups and other buttons on the Digitakt.

With the existing hardware I have, I think I would be able to get away with plugging some CV into the Morphagene SOS input, but I’m not entirely sure the best way to generate the signal to go into that input. A foot pedal seems like it would be the most logistically convenient, but it’s not clear what modules I would need to drive this (something like the Moog EP-3 requires power to come from the cable - maybe I need to DIY a voltage source for it?)

Alternatively, I was thinking about figuring out how to make a latch of sorts from a midi button and the FH-2.

Does anyone have any other suggestions, or recommendations based on how they’ve solved these kinds of problems in the past?

euro to dj mixer channel1 on the floor, pushing the fader with my toes

this imagery made me chuckle and smile, but as i’m not equipped with a dj mixer, this seems like it may be less cost effective than other solutions

There’s also a smaller one as well:

Is there any kind or sketch tool /looper that lets me record 1-2 patterns and then playback the audio synced to a gate from my sequencer (earthsea)?
Or if not, sends sync out based on the audio?

Doesnt have to be euro, can be 9v, can be diy, not too costy.

I only have 2 full cv/gate pairs and about 5 destinations, so synced looping of audio would be ace