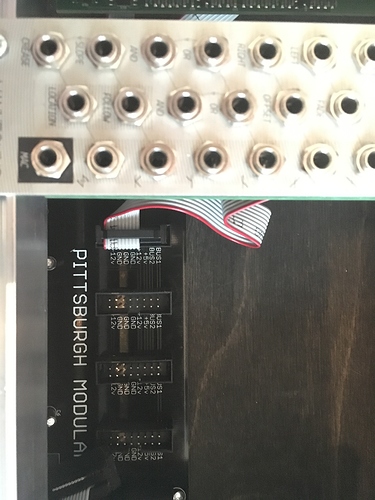 does this mean the 5v pin is never used? i know the board generates 5v from its 12v rails.
i’m having noise issues with mannequins and monome modules with this board (i already got a replacement with the same issues) it seems to be related to the number of modules connected rather than which modules are attached to the board.

have you narrowed the problem down to a specific module or two? are you using a switch of ext5v with your grid?

It seems to be the mannequins modules because I’ve had the monome modules in another case with no problems (I’m using a switch). On the other hand I’ve had two of the Mannequins in another case and no problems. At first I thought it could be he three sisters (I have two) but as I kept adding Modules to the case the noise started again. It seems to be when it rises above a certain power threshold (below the one specified for the case). When I attach modules one at a time and then disconnect them again I don’t get the noise. The case is a move 208. I’m out of Ideas. Even changed the PSU.

Ok I just disconnected all Mannequins modules and left the Monome modules in. Same issues…

It would be very useful to provide a description of the noise as there are very many different sources of noise in electronic systems. Perhaps post a recording as well for extra thoroughness.

here you go. I can even hear it faintly coming from the modules themselves. PE Noise.wav (1.5 MB)

Do you mean you can hear it coming from the modules with no sound system attached? A mechanical noise rather than just noise in the audio output?

yes, i can hear a very low volume version of this coming from modules.
it’s the move 208 by pittsburgh modular.

Are you below 75-80% of the max of your case? There are a lot of warnings about such a trespass… I can go very near to the max without noise, but Doepfer cases are reportedly specially stable.

I got exactly the same issue with my Move 208. Also having monome & Mannequins modules in my setup, after alot of testing with a friend, I came to the conclusion the -12V rail is really unstable. This is a example of the -12V output in red, audible noise yellow.

The LM22673 chip which ‘makes’ the -12V even makes sound itself when getting alot (within given specs, though) of mA thrown at it.
My PSU (or I should say both, because Michael from Pitts already send me a newer revision) is currently underway to Pittsburgh, and hopefully they can fix this…

Eek. I just bought this same case and haven’t even hooked anything up yet. Hope I get lucky and dodge this problem.

interesting thanks for sharing. i just got rev5 of the board yesterday. which version do you have?

@jasonw22 fingers crossed…
@kbk tried both Rev3 & Rev5, the noise thresh of the 5 seemed a bit better, but still there.