How sensitive is the Pressure Points to touch? Is there a lot of resolution in the CV you can produce with pressure?

I’ve had good luck with it, but I know not everyone has had the same experience. I can use it to shape CV, it feels like my finger is an envelope when I use it.

I’m in the process of planning out a 104 hp control skiff which will likely be filled in this arrangement:

I’m definitely into the Alessandro Cortini approach of dual Renés (one for sequencing and one for stored quantized voltages), but I may also reserve the space for whatever new stuff Make Noise announces by the time I can afford a second René…

The Snyderphonic Manta plus the Manta Mate eurorack module is a pretty robust touch system. I can’t say anything about the Manta Mate since I haven’t used it, but I’ve been using the Manta in other ways (including Max -> MIDI -> CV) for years and find it an incredibly expressive interface. One thing I like about the Manta, that I think is rare in other capacitive touch systems, is its pseudo velocity sensitivity. Since it’s “faking” the velocity sensing, it’s not as sensitive as, say, a typical MIDI keyboard, but it’s quite useful nonetheless.

(Full disclosure: I know Jeff and I received my Manta from him in exchange for related work, though I this work wasn’t directly on the Manta itself. I assure you, however, that my opinion that the Manta is awesome is genuine.

Seconded! And I actually bought my Manta and MantaMate

mine aren’t euro format but touch doesn’t feel so nice inside a modular racked imo. near it and fully moveable open and patchable yes! 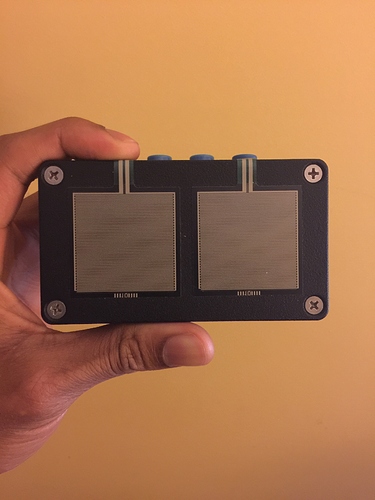 Wonder if you could build the interface of your dreams out of a set of allflesh plugs between your existing set up? Perhaps not ideal, but the small investment and expanding potential might be worth your investigation.

I do actually have a set of Allflesh jacks! I need to spend more time with them.

Nice one! I’ve had my eye on them for awhile and should probably just take them for a spin. They seem to me to be the type of thing that lays around for long stretches but then on a whim inspires an entire, integral instrument.

Any chance those might serve the purpose you sought? Might have to get a little inventive and inefficient, however…

Stereo Field can work as touch controller for CV controlled gear. It’s rather experimental but it feels, looks and works geat. It has built in attenuator so even my dry hands will make it work. I like it a lot and I’m using it a lot in my noise studies.

This would be more my style

I’ve had an Allflesh kit for a while and haven’t gotten around to searching for my soldering iron. I should do that this weekend if I have a chance.

I’m surprised to not have seen any mention of the Korb Pusher so far. Does anyone here use one? I’m currently building one and will report my experiences with it when I’m done, although I can’t really compare it to anything else (yet!)

Btw the panel design shown on the website is old, on the new ones the FSRs are at the bottom and the jacks at the top, which seems much more sensible and ergonomic.

I have a Verbos Touchplate Keyboard, when I first got this 84hp module I encountered the grounding issue quite often. After several swaps of module the problem almost disappeared.

At first this keyboard seems a one-trick pony, and little by little I found that the up/down bender is a great feature that I can make sounds more expressive, and those 8 tunable ‘preset’ CV sources can be more useful than I thought.

I think this keyboard (so does the Sputnik) is not for everyone, but if you love Easel, go for it (both Verbos and Sputnik), you won’t be regret.

The Twisted Electrons Cells module might be interesting to anyone who’s looking for a Rene-like thing without using nearly as much hp. I played with one briefly in a shop but don’t have any really strong opinions about it.

I have the Meng Qi Lines and it’s interesting to use if you want fairly unpredictable behaviors. I like it for subtle modulations, but I don’t really consider it to be a “control” module. Part of this is because it’s pretty cramped so I’m not really able to hit it very precisely.

Capacitive touch controllers do not always work very well with my fingers, which has kept me away from Rene and Pressure Points. I was really happy when Tetrapad came out because it works for me consistently. It’s versatile and doesn’t feel menu-divey despite having multiple modes. I do find myself wishing that it had a way to record and playback gestures.

I played with the Landscape a bit at Moogfest this year. It’s a beautiful piece of kit but is pretty unpredictable as far as control goes. That said, it can be incredibly expressive. The style of noise and distortion doesn’t really match my personal taste because it’s fairly high-pitched.

I’m actually working on developing a couple different touch controllers that can be mounted in euro based on my experiences with Buchla controllers… currently it’s capacative touch built on a teensy but I’m also going to make an analog version that isn’t so sensitive to grounding issues. I have a couple pretty awesome prototypes but they’re not ready for the outside world yet. Maybe I can ask y’all for feedback when I’m ready?

Lines was one of my first modules, & totally love it. With some practice you can use it to output one-shot gates, & also is beautiful as a kind of chaotic matrix mixer for redistributing or gating multiple signals.

Also, for those that are into digital control, highly recommend building custom phone/tablet interfaces (osc or MIRA). Even just sending offsets via touch faders or more elaborate xy pad mapping with having it all under one or two hands makes controlling a bunch of lots of processes at once really fun.

Sorry for the tardy reply, I’ve been travelling. Nothing too sophisticated, just using it as a voice control, so converting MIDI info to pitch, gate, velocity and routing that accordingly, so far mostly to my ER-301. Then I’ve been programming rhythm patterns and sending those as gates. I have plans to play with the polyphony options of the ocd’s and seeing what I can do with that in ER-301, but haven’t gotten there yet. So, really, just sequencing stuff. But I’m excited to play with some of the various MIDI LFO and using the CV outputs for that which apparently is a faux pas in some circles but sounds like fun to me.