Saw this posted over on the Elektronauts forum:

Looks like a slimmed down Timefactor with some neat effects in the loop’s feedback.

Mono, with expression pedal input and at least USB MIDI.

It’s Eventide so I’m sure it will be amazing but my lord is that an ugly design. 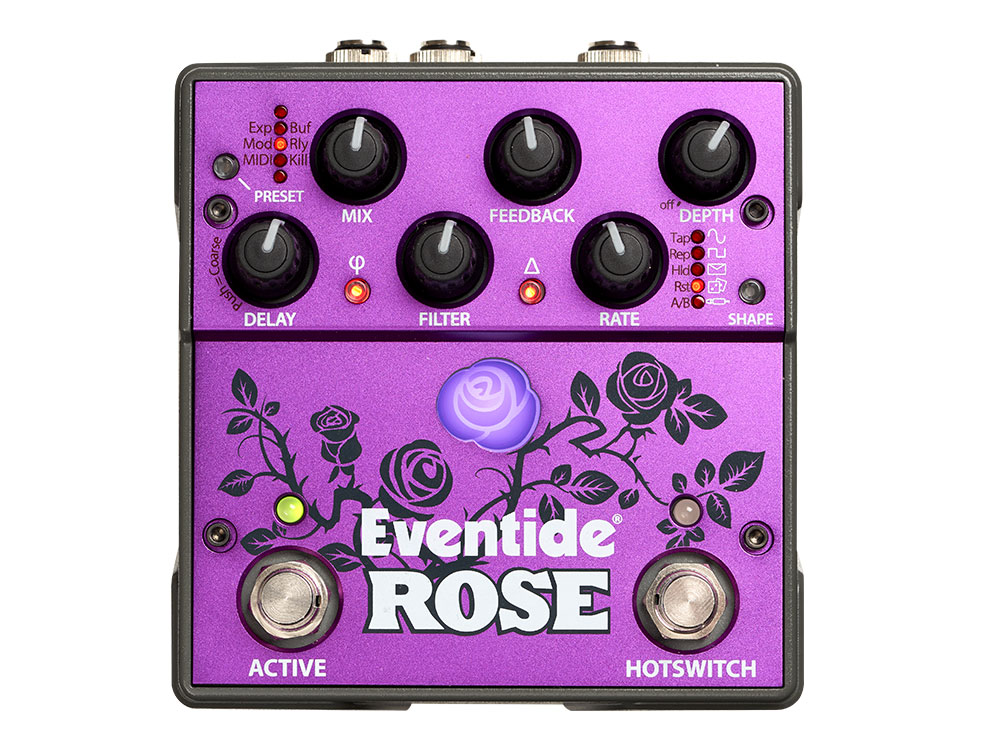 An unexplored garden of innovations for musicians will soon be available from Eventide's newest creation - The Rose:  a cascading bouquet of sounds in a sleek, stripped-down, small footprint effects

The phrasing is a little ambiguous but it might have an analog filter: “Analog Mix, Low Pass Filter, and Feedback”. The delay itself is definitely digital though, 50 seconds of BBD would involve over 100 chips!

Hmmm. True. Unless they did their own bed chips using modern in-chip capacitive technology. But since they say “bit bucket” and not “bucket brigade” I suspect you’re totally right.

Nevertheless if anyone could make a digital delay sound and function beautifully in harmony with analogue principles it would be Eventide.

So, we’ve been experimenting with a new delay architecture for a long time – c.f. EuroDDL and DDL-500 – and this is the next step in that evolution. We took the same high-resolution digital delay line, wrapped it in analog filters, feedback and dry/wet mix. The key, though, is that we added an analog modulator that directly modulates the converter sample rate over a wide range. With this, it turns into a modulated delay in the style of a bucket brigade, albeit at a very high sample rate and resolution.

We took that concept, opened it up to allow some crazy extremes, added some presets, and added a glowy Rose in the middle.

So, in addition to getting up to 50 sec of delay, it can go to sub-millisecond delays (so you can get some really cool flanging and comb filtering sounds). The mod rate won’t get quite up into audio rate, but it does go from glacially slow to really choppy and fast. The mod depth goes really deep (it will shift up to an octave).

It also has analog feedback that will go a good notch above unity, and a resonant filter. These, in combination with the modulation, let you get some really cool self-oscillation and ringing.

Finally, the expression pedal can control everything, and the hotswitch has tons of flexible options (including infinite repeat and the ability to quick-switch between sounds), which (IMO) turn the Rose into a really cool performance/improvisation box.

No DIN MIDI, only USB MIDI and TRS MIDI through the expression pedal jack.

Updates, MIDI control, preset swapping, and some things we probably haven’t thought of yet, but might do in the future.

There’s a modified sine, square wave, random walk, and an envelope follower. You can also directly modulate the delay line using a knob or the expression pedal.

We took the same high-resolution digital delay line, wrapped it in analog filters, feedback and dry/wet mix. The key, though, is that we added an analog modulator that directly modulates the converter sample rate over a wide range. With this, it turns into a modulated delay in the style of a bucket brigade, albeit at a very high sample rate and resolution.

That’s quite cool, looking forward to giving this a try…

Oh my… I’m sure it will sound good. 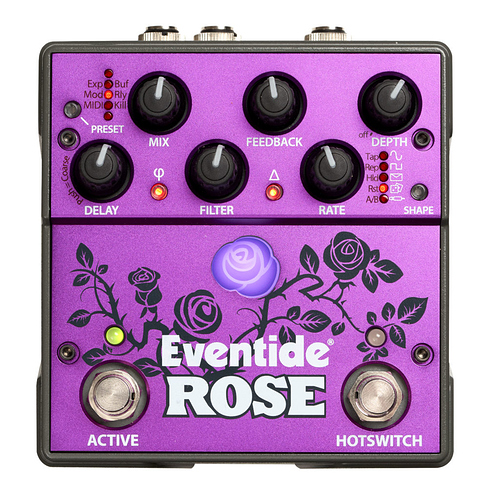 Yep we’ve got a thread about that here.

Wow, they really did make the ugliest effects pedal.

This is… This is really incredible. I mean, rich people will finally be able to buy a pedal ironically, I guess that’s the demographic they’re targetting?

Edit : I guess this my “function over looks” limit.

The description sounds nifty. I’m hoping for a surprise on the price but it’s probably going to be more than I like.

I think this is looking like it could be really great, it looks far more interesting to me than the new Strymon box. Sample/clock rate of digital delay lines is where its at for me. This is also what gives BBD delays a lot of their character (lower sample rates at higher delay times) IMO.

The Eventide bumpf isn’t very clear at the moment, but from what I can tell it should be able to do the primetime ‘hold and multiply’ type effects in a pedal format… which is a dream for me.

To be honest, this seems pretty middle of the road when it comes to effect pedal designs: it’s not great but I’ve seen faaaar worse

I think that’s exactly what Eventide would like to hear. Those guys used a lot of their effects and used them very well.

I, too, am coming 'round on the design. I still don’t like the sort of “tattoo rose” logo graphic, but the colour is just fine, it’s kind of cool actually since it’s an uncommon colour for guitar stuff, and the concept is good.

From a technical standpoint their digital delay lines are second to none, and the fact that they vary the sample rate and not the length is VERY cool, yep. I have a feeling this is going to be a great pedal for drones, ambient stuff, and probably a very neat companion for modular.

BTW: I would assume, following the pattern of all other Eventide pedals, that if you give it a 0-5V CV input on the expression pedal input, you can control at least one parameter by CV (basically however many parameters you can map to the expression pedal, you can control by CV). This is a tradition of all their factor boxes and this appears to be constructed in the same fashion.

Just so that there’s no confusion on my personnal opinion about this, I think the design is absolutely horrible, but the color is wonderful, it’s really just everything else that I dislike about it ! From the color of the plastic all around it that doesn’t match, to the fake vectorized 80’s generic rose tatoo logo, the lit up rose, the typographic choices, the way the knobs don’t match the rest of the aesthetic choices and the implementation of the text and small logos.

Still, that’s a decision, and it’s also nice that everything on the high end market doesn’t look like a cool kid from Brooklyn’s wet dream, so I’m fine with it, and I’m gonna go back to read the thread Against Design (the ethics of branding, and the silent gears)

) then that will make it even more desirable for me.

I’ve gone off the DSP modelling delays recently (I have a Strymon Timeline but I’m going to sell it).

The spec is usually 0-5V, no negative voltage accepted (that will blow stuff up), and try not to exceed 5V by “a lot”… I’ve heard Eventide quote other units as “probably safe up to 15V” but I wouldn’t push your luck. That said, within those reasonable parameters, you should be able to CV control it without any problems.

All of the Eventide stomps have this feature, btw. Space, Timefactor, H9, etc. and since the expression pedal is normally flexibly assigned (and usually to multiple controls at once and in different amounts/directions), the CV control becomes quite powerful, even for a single-axis.

Amusingly, those are what bother me the most. Like, why go to all the trouble of having the rose vine graphic and then dump EVENTIDE® ROSE all over it. And what’s going on with the font on ROSE, so many things wrong in just four letters. I guess we can at least be thankful it wasn’t in italics.

I wonder if the logo’s size, placement was a late decision post some lawyer or executive consultation.

However, I am looking forward to hearing more demos. I can be convinced to overlook aesthetic choices.