Tape Delay for the win 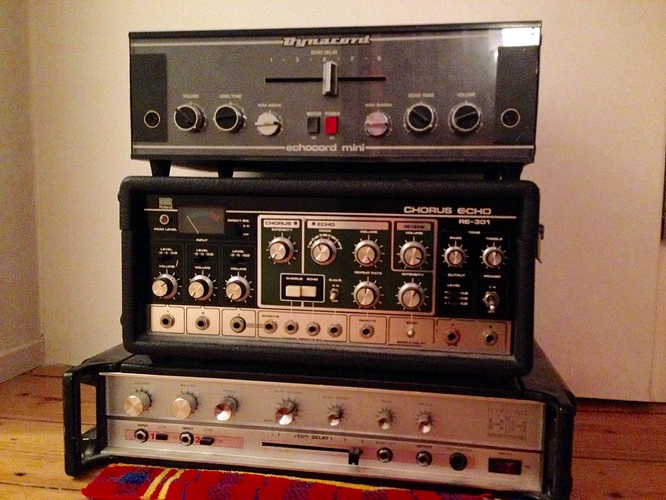 Beyond the original Space Echo and Roland’s RE-201, can you guys recommend any good tape echo hardware? Even digital emulation? (For software, I really like Audio Damage’s plugin.)

echoplex is the bomb…

Inspired partly by Tehn’s, partly by a big chunk of Headphone Commute’s “In the Studio With…” series, I just bought an re-301 Chorus Echo.

Because that’s what student loans are for, right? Right? Ok. Maybe not. Oops.

Are you Laura Alvarez, or do you know them?
I like this

thank you
yes, me and laura made these tracks
she sang two passes of vocals
i made it into this…

her dad (my father-in-law)
found an echoplex in the trash
'do you want it? -he asked me
'or i could make a good toolbox out of it
'yeah, i want it -i said 'thanks

had a 201 but now prefer digital

I absolutely love my strymon el capistan and wouldn’t part with it. Compact too.

Ugh Delay No More is so good. Using it at 80% dry/20% wet adds a very pleasant digital grit to everything.

His designs are underappreciated. I’ve built all the Sloths and the 1050 Mix Sequencer. The 1050 is a really smart design that combines switching, sequencing, and mixing.

I have, and have had, a bunch of tape echos by now.
Currently I’m using a Roland RE-200 (has the excellent function of actually being able to turn off the tape drive and just use the reverb, which the later models didn’t) where I modified it to use a regular long tape loop rather than the endless Moebius loop cassettes it was originally made for and a modified Korg Stage Echo with a no erase function - the latter is definitely the best as far as sound quality goes, but the former has a lot of varispeed looping functionality which has served well in many of my recordings.
Apart from that I’ve had several different Watkins Copicats, which although alright are fairly limited in functionality and sound quality - they can be had a lot cheaper than most other tape echos though, so there is that.
Also had this relatively obscure LEM Baby echo/power mixer. An 8 input mixer with EQ and echo amount settings for a three-head tape echo and a two output 250 watts powered amp. The thing weighed a ton and came in a cast iron case lined in red velvet. Very classy piece of hardware. Got it as non-functional from a guy in Germany because he hadn’t been bothered to find a proper power cable for it - but the thing was near mint and ran like a dream. It was a bit unhandy though, so sold it a couple of years back to Søs Gunver Ryberg. I figure she’s putting it to good use, otherwise I’d probably be lamenting not having it around anymore.
Also had some Russian machine, that I have no idea what was actually called, but it was fun. You don’t know delay till you’ve had 8 tape echos chained up.

Anyway, the Roland and Korg’s are excellent and have great functionality. Actually being able to control the speed on your echo does matter quite a lot for it’s usefulness - but don’t get too hung up on the cult status of the 201; there’s plenty of good echo to be had elsewhere.

That’s very helpful. I’ll likely end up with a 201 or 150 simply because there are a few out there right now at pretty good prices.

Thanks udbrud, this is really appreciated info! This post will be up in my browser for awhile…

Have you (of anyone else) had much experience with the Roland RE-20? Also seems like someone is due to make a sweet Eurorack digital tape echo/echoplex style module…

On the way! …I think

Makers of precision-crafted music electronics and effects pedals. We want to build products with no compromises. We want to push the limits of technology in music.

Yeah, that strymon is gonna be amazing. But so large…

Pittsburgh Analog Replicator bbd is doing the trick for now. Insanely dark sounding and feels cheap as hell, but great functionality. Haven’t flipped the re-201 on in months, cuz no voltage control!

No problem, glad it could be useful.
I had the Boss RE-20 for a moment, but I wasn’t a fan. It was an okay emulation, sure, but it became “just a delay” in that it was far more rigid and limited in its form. It didn’t really have that possibility of “using it wrong” that you get with the real analogs - because they are so tactile, there is a huge range of abnormality and inaccuracy to be had as well as possibilities for physical manipulation that isn’t there with a digital emulator, which is coded to serve very specific parameters and options. Sure, lots of people will just use their tape delay as a regular delay and then these machines and emulators are largely okay replacements (at least the size is far more convenient!), but for on-the-spot experimentation, I’ve always enjoyed the real ones more.

And yeah. the Generalissimo had me pretty excited to be honest (it also has SOS, which is as guessed kind of a necessity for me), but seems they’ve scrapped it for now to rethink the whole concept and possibilities. And the name. I hope they do something about the color too … I don’t need a giant green block in my modular. Also enough with the Space Echo green references, huh?

Yeah as @udbrud mentioned the Generalissimo is going back to the drawing board. What's going on with Generalissimo? - Strymon

We are hard at work on a platform that will greatly improve on the Generalissimo prototype that we showed earlier this year.