Examples of being an ally for gender, race, lgbtq+, disability, class etc. in music/culture

Following on the Code of Conduct discussion I’d like to start a topic for specific things any of us actively do or have done to be allies to those whose existence is questioned/threatened/erased in mainstream culture, for example: people who aren’t white, women, people with disabilities, people who are lgbtq+, people who are neurodiverse, and others.

While there’s never enough and back-patting isn’t going to get our culture where it needs to be, it’s also good to see and know and share some specific things we’ve all done in case someone is looking for ways to get involved but doesn’t know where to start.

I’ll start with one of the things I’ve done that’s felt pretty good and been helpful to others in my musical community. I really look forward to knowing more about the things you do. There’s room for large things and small things in this topic so please share and help give others more ideas.

Include people who don’t look like me in leadership positions in a music institution.
I’m a co-founder of Community of Sound in Burlington, VT. In the process of getting that up and running I very specifically and intentionally sought out other experimental musicians who are different from myself. As a result, the leadership group includes a variety of lived experiences: trans, disability, multiple genders, an age spread of 40 years. The board and membership includes racial diversity, even more gender diversity, even more age spread, neurodiversity, and significant economic class differences.

There are several ways this improves the institution and the work we do: different perspectives results in different awarenesses and creative practices, new audiences for each others’ work as we often share audiences with mixed bills etc, additional solidarity and resource-sharing when people really need it (whether it’s material resources or emotional support or moral support or physical labor etc).

In order to do this in a place that’s white and plain enough that SNL literally did a skit on how white and plain it is I had to be very direct and specific. I also turned down some opportunities in setting it up. I’m glad I did though because it has made me a better a person and the institution itself more resilient.

It’s involved me doing more listening when I don’t understand something or specific requests and to default to a “cool, I’ll support that even if I don’t fully get it, I can see how it isn’t harmful in any way and it seems important to you” kind of attitude and as a result I’ve learned a lot. 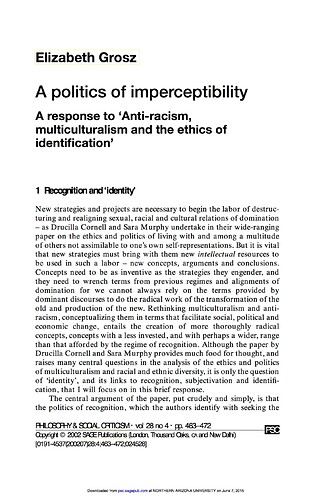