i’ve been messing around with a rewrite of pattern_time which cleans up its methods a bit and captures some of the things I’ve been baking into cheat codes 2. prompted by @okyeron’s ping and my own feeling of “stuckness”, i figured it’d be good to the WIP state to snag feedback + help cleaning it up and getting it wrapped

this is not release-ready or for general use – expect dragons 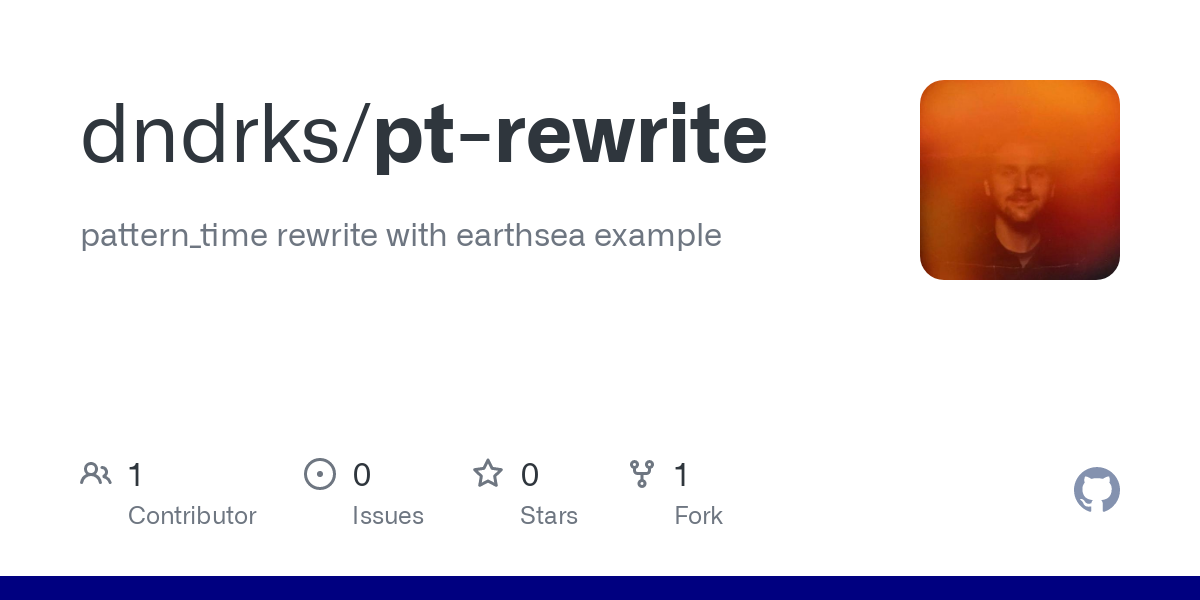 pattern_time rewrite with earthsea example. Contribute to dndrks/pt-rewrite development by creating an account on GitHub.

when adding a pattern to a script, we’ll use longPatternName = pattern_time.new("name"), where the “name” is passed to the new PATTERNS param menu.

if pattern time is added to a script, a PATTERNS param menu is created and inherits the names of the script’s patterns. if no name is provided *

passive stuff, all working in the background
as a recording is being made (:rec_event), each entry commits the .time between itself and the event before it. after this is calculated, that duration is divided by clock.get_beat_sec() to give us .time_beats.

after the recording is committed, :calculate_quantum is automatically called, which rounds the .time_beats to the nearest eighth note value. this is committed as an entry’s .quantum.

as the pattern plays back, it is either using the .time or .quantum to determine when to move to the next event (using either :next_event or :quantized_advance).

active stuff
if :quantize(1) is executed, then the metro that drives unquantized playback stops and the clock-synced :quantized_advanced function takes over.

what happens is basically a “runner” system – since our quantum is measured in 1/8th notes, we total how many 1/8th steps an event should last for and a runner keeps apace at an 1/8th note count – so if an event’s duration is 3 quantum, the runner will have to reach 3 before moving onto the next event in the pattern.

most of this feels really solid, but i would love some eyes on the quantization stuff. in the above repo, i’ve included a revised copy of earthsea that uses the proposed changes. on the grid: 1,1 is record start; 1,2 is playback; 1,3 is overdub; 1,7 is loop enable; 1,8 is clear.

also, none of what i’m sharing has to be the baseline – if someone can approach things from a totally different angle with more desirable results, that’d be super! i just could use some extra hands + brains on this challenge and figured sharing some work might help

ok… as a pattern noob, questions:

as for the new stuff above - this looks really good so far.

Can patterns be saved? If not, then this would be a very good addition. So then…

How the heck do you go about storing a big table?

Would a function to return the length of the pattern be helpful (I think it might)?

after the recording is committed, :calculate_quantum is automatically called, which rounds the .time_beats to the nearest eighth note value. this is committed as an entry’s .quantum

Can the beat be rounded to other values besides an eighth note? Maybe one pattern I’d want to quantize at 1/16th notes and another at 1/4notes.

Presuming it can handle the quantization of both starts and stops, should

My first thought is to add the parameterized stop/play/loop/overdub functions rather than remove the old ones. This would preserve compatibility with older scripts. I’m also a fan of the existing method names, but see having dynamic control with a variable would be helpful.

My first thought is to add the parameterized stop/play/loop/overdub functions rather than remove the old ones. This would preserve compatibility with older scripts. I’m also a fan of the existing method names, but see having dynamic control with a variable would be helpful.

Or we could make the old function names act as shortcuts to be deprecated later. I.e. function rec_start() rec(1) end . I agree compatibility to old scripts is important, but func(state) seems to be more in line with the softcut api.

I’m taking a look through the example now.

I need to spend some more time with the quantization stuff before I can give any suggestions on it. I left some proposed changes on code readability for now.

I was thinking you could use the new observable library to track the pattern param menu stuff. It would probably make managing multiple patterns param items easier, and make it super easy to rename them or something like that.

What if pattern_time was only in charge of managing existing patterns, and playback/quantization/clock syncing.

And pattern would be a table of (pattern_event, duration) in charge of recording/overdubbing events.

Then a pattern_event could be anything.

This is probably already close to how it works, so maybe this is just Object Oriented thinking taking over. It just seems like there are a lot of timing variables being stored in this one pattern thing at the moment.

*A side note, since I’m still looking at the code, it seems like pattern params won’t be able to be deleted inside a script at the moment.

love the energy around this, thanks all!

What if pattern_time was only in charge of managing existing patterns, and playback/quantization/clock syncing.

And pattern would be a table of (pattern_event, duration) in charge of recording/overdubbing events.

Then a pattern_event could be anything.

yeah, what i posted is just my own fever dream of trying to wrangle this – i’m for sure not an experienced programmer, just…persistent / hard-headed when it comes to a challenge. maybe it might make sense to just start fresh with some agreed-upon requirements?

from my perspective, a golden version of pattern recording in norns would include:

a subtle suggestion if you want to cut down on members is ditching ‘rec_state’ et. al. & sending a return value back through ‘:rec()’ etc when it’s used argument-less. that really just comes down to taste though (that or ‘:get_rec()’ feel a little more standard to me in the larger world of APIs than ‘_state’, but this is nit picky)

this doesn’t need to be a 1.0 thing but eventually the param menu (haven’t looked at the code yet so not sure how it’s initialized) could take some args that add extra bits like pattern saving / recall or leave out the quantization if it’s not needed etc etc

i’ll try this out & help out if i’ve got some time when my life is put back together ! this will be super duper handy to have around

I’m putting together some thoughts on this too! I think the underlying ‘table of {time, usertable}’ storage is solid, it’s really just a matter of what API you want into it. @dan_derks the list of functionality you present is a great outline toward it!

There’s a bunch of details about quantized pattern recording i remember from making mlrv that i’d love to help articulate & capture in this library.

Might even be another great library to capture on crow!

I guess I’m trying to make the argument that, a clocked recording mode isn’t needed in order to have clocked playback. If pattern time has a clock, :rec/:play can just sync on any state change if syncing is turned on.

Might even be another great library to capture on crow!

If an event had arbitrary data, and the pattern a way to handle it, pretty much anything is possible. For example, if you had an input into crow, and you made an event every time the voltage changed (the voltage would be the data). You would have the voltage at each point in time from when the recording started. Then when you play back the pattern, those voltages could be sent or modified with the right timing to any of the outputs.

@dan_derks, @Galapagoose I’ve been kind of throwing together my ideas in a fork of dan’s repo. I haven’t tested any of it yet, but I think it should work atleast abstractly. I tried to model it closely to Softcut, because the core idea seems identical to me. I don’t think it’s perfect but it might help to further this development. I kept all of the “golden” features in mind.