Fates - a DIY norns DAC board for Raspberry Pi 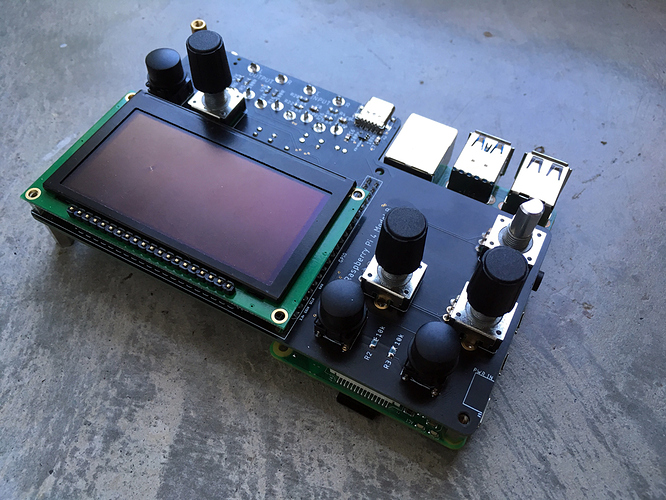 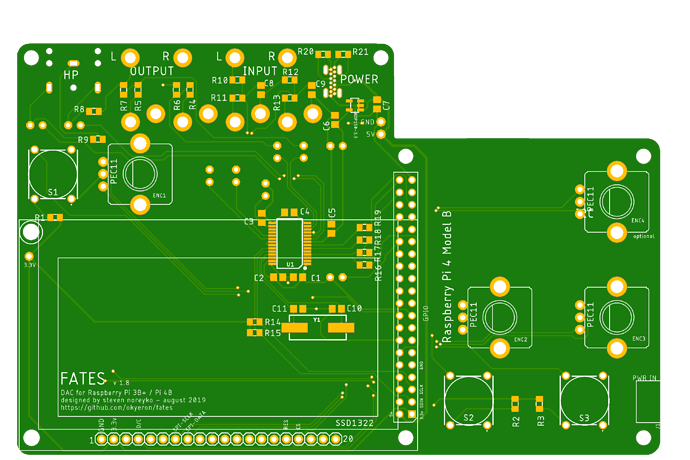 Fates is a pcb add-on board for Raspberry PI 3 Model B+ and Raspberrry Pi 4 Model B that provides a stereo audio codec with headphone driver, 3 (or 4) encoders, 3 buttons, and a grayscale OLED display. It’s compatible with norns software and monome hardware (gird, arc).

Reminder - This is DIY

This is a Do It Yourself project and is not supported by monome. Please keep Fates related support questions in this thread.

No longer available. Not open sourced.

Fates is now using a forked version of the norns codebase.
GitHub - fates-project/norns: norns is many sound instruments.

The norns code is only modified for minor hardware differences and update compatibility.

All scripts/engines written for norns should be fully compatible

If you have system 200218 or later - run the on device SYSTEM > UPDATE from the norns menu.

If you are on a version prior to 200218, DO NOT USE SYSTEM > UPDATE (it will brick your device and require re-flashing the entire system). You must update manually via SSH.

See the project Releases Page on Github for instructions

Fork of the norns codebase is here: GitHub - fates-project/norns: norns is many sound instruments.

Unfortunately PCB board files or gerbers will not be made available.

Work on this project began with hacking a Terminal Tedium pcb and adding encoders and a display. Since then a number of prototypes have been built and I’ve used those to work on norns scripts and to contribute to the norns codebase.

While this is aimed at running norns and ORAC, I expect this board will also be of use to anyone who might want a nice audio + controls solution for Raspberry Pi.

More images and whatnot of prototypes on my instagram:

Incredible work! I’ve been following your work closely and am very excited to see how this turns out. I read in the SPC thread that there is a monome norns-shield coming as well. I’m interested to see how the 2 approaches differ.

I noticed in the image, that there is some empty space to the right of the screen. I wonder if it would be possible to add a small perf section for potential DIY add-ons?

uh oh. looks like a great excuse to get a 2nd norns to sequence my norns

I’m gonna try and get my own up and running, but holy smokes this is great. Really looking forward to it.

empty space to the right of the screen. I wonder if it would be possible to add a small perf section for potential DIY add-ons?

Kinda yeah. Although that pic is from a previous version of the pcb. There is now an i2c header over there now for possible expansion.

I hope to work with @TheTechnobear to get the controls and screen working with Orac 2.0 at some point in the future.

definitely, looking forward to this…
be really nice to have an all-in-one solution for Orac for the rPI.

btw: for a ‘cheap’ enclosure solution, I know a few people are using (blank) pcb boards as a kind of sandwich top an bottom (held in place by standard pcb spacers).
its not a perfect look, but I do quite like its ‘minimal’ look, and apparently they are very cheap to buy/get made. (of course, now for the life of me, I cannot find an example

for a “supplier”, they are quite good as

disadvantage - your fixing a form factor, e.g. which screen to use, and a pain to have variants e.g. option 4th encoder. (though I guess, 4th hole could just be marked, and drilled by user)

my experience with axoloti is whilst many really like to create/order their own enclosures, some find it a little daunting, as there are not in the ‘maker scene’, so don’t really know where to get 3d printing, or laser cutting done - that said, the more DIY it is, I guess the less of an issue. In Norse mythology, the Norns (pronounced like “norms” with an “n” instead of the “m”; Old Norse Nornir) are female beings who create and control fate. This makes them the most terribly powerful entities in the cosmos – more so than even the gods,...

just the thing to go with diy varibright upgrade for old grids - this community is amazing.

but norns create/control fate, but this controls norns… is that not cyclical ?
(ok, im stretching things too far for fun… thanks for the link

Is this the same open source shield that @tehn mentioned, or are there multiple parallel efforts going on here?

Is this based on the terminal tedium? Seems to use the same dac. If so it would be nice to combine them… E.g., a eurorack norns with extra CV ins/outs…

Anyway, I’d be interested in a bare pcb, as well as the design files so I could extend/hack it for my own needs.

So yeah - this is a different parallel effort to what @tehn is working on.

And also yes - it was initially based on a terminal tedium pcb (picture of the first prototype below). I’ve since redesigned my own pcb (a few times). I initially had the idea to make the same pcb work in both a ‘desktop’ and ‘eurorack’ format, but that got a little too complicated so I focused on the desktop format for now.

With regards to CV specifically, i could add hardware i/o for that, but it would require a custom fork of norns to make that happen from the software side - which is a bit above my pay grade. 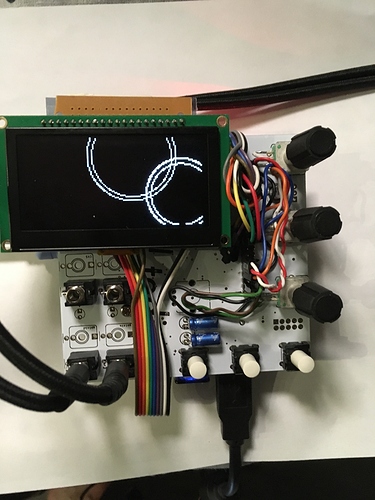 Im so in! Hopefully soon

I’m not sure I understand the question. Audio quality is great. On par or better (I think) than some eurorack modular audio devices. The newest revision as of last week has fixed my previous noise issues.

FWIW - I went with minijacks since I have a bunch of modular stuff and was planning on using then all together at some point, and that the 1/4in jacks take up so much real estate on the pcb.