Discovered fennel pretty recently and thought it’d be pretty neat if I could use it for scripting Norns. 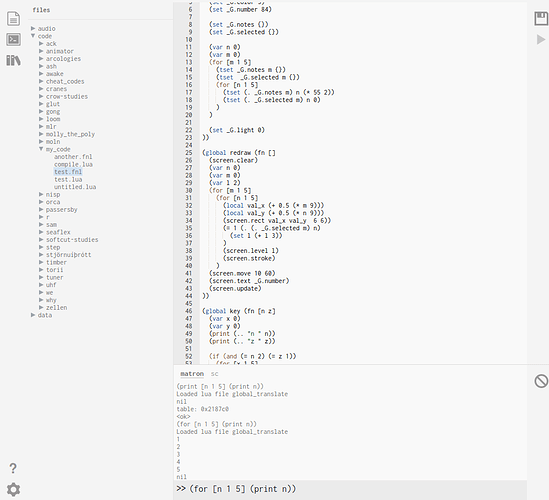 image948×862 67 KB
Note: For debugging right now, the Lua script it generates is being logged.

If you want to try it out here are the steps.

That’s super cool!
The advantage of using fennel though is that creating bindings to the current monome stuff isn’t necessary since it’s completely compatible with Lua. Translating the norns studies have been a breeze. 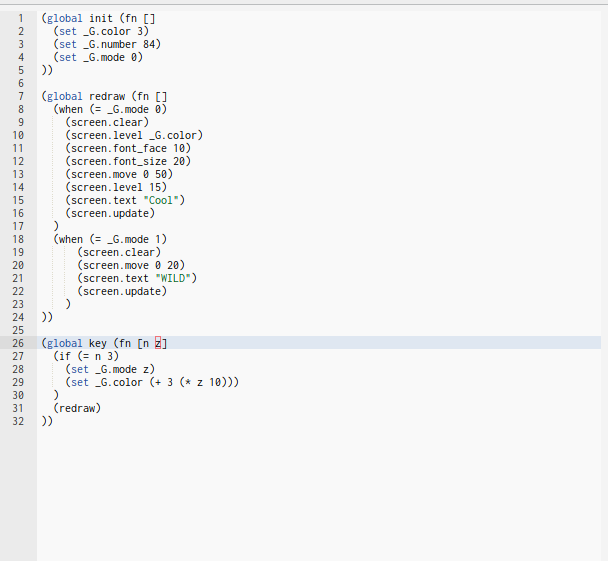 I’ve been looking into the possibility of running fennel through the Matron REPL, but I’m not well versed in C (or even Lua for that matter).

Does anyone have any tips, pointers, or a general direction on where to start?

Matron evaluates a line of Lua from the REPL with l_handle_line, which interacts with the Lua C API to put the input line on the stack and evaluate it. A lot of the evaluation code is basically the same as the code for the lua repl that’s part of the main Lua distribution.

It might be that the simplest thing to do here is to have a small script or program which turns a line of Fennel input into a line of Lua and feeds it to matron on stdin. Matron already runs with stdin wrapped by the ws-wrapper program which allows interacting with matron’s stdio over a websocket – this is how the maiden browser app and the maiden repl CLI interact with matron, so you would then just need to have ws-wrapper wrap your Fennel-to-Lua translator.

Alright, I managed to get something working with the matron REPL based on @csboling’s advice (thank you!).

Running into some issues now. For example, when trying to write a simple for loop the value that’s returned is nil (instead of printing n):

I believe this is happening because the fennel compiler turns that bit of code into this:

I’m not totally sure.

The second obstacle is the way I’m processing the code from Maiden. I wrote a little Lua script to compile the code:

And it’s called in C like so:
(pardon the horrendous code, I don’t really program in C. A lot of this was copied

The problem I’m running into is if I pass in something that contains ' then that’s going to break the compilation step because the string of Fennel code will be terminated prematurely. Example:

Not an insurmountable problem, but it feels hacky that I have to deal with it.

Ok, collapsing the generated lua to a single line fixed the first problem

Made some breakthroughs this weekend and a hit another roadblock. I’ll add an update on how to get this running in the original post.

I thought it’d be nice to be able to switch the REPL between Lua and Fennel, but I can’t find a decent way to got about this. For now, there is a flag you can add to matron.sh to start the REPL in fennel mode:

In the future I might take what I did in lua_eval.c out into a separate program that can be wrapped by ws-wrapper. I think that’s probably the way it should be done

Pretty stoked where it is right now.

This is super interesting, the buzz around lisp has always caught my attention but in the several attempts to get more familiar with it I’ve not really understood why it has this hype as such a good language, maybe some norns apps will give me a change to compare the code and see for myself if and how it offers something more powerful and elegant than a more recent language

Following this with excitement! Did a tiny bit of Fennel for the Advent of Code last December and liked it!

This is very cool! I’m a lisp developer whose is interested in trying my hand at some norns scripting, so I decided to give this a try.
I was able to follow your instructions but updating your changes to what is current in the norns main branch (top 3 commits of Commits · philomates/norns · GitHub)

With this I could try out your script to get simple text drawing:

and more generally, if anyone has resources on how to hook up a normal editor repl client to send forms to maiden, I’d be very grateful. I tried doing simple things like websocat ws://127.0.0.1:5555 and sending lua/fennel forms over but I think I’m missing something.

EDIT: Just found that the websocat thing works for lua code if you add a --protocol bus.sp.nanomsg.org flag. Now I just need to figure out how to start the maiden-repl thing with the fennel flag enabled in matron (by hand looks like ./build/matron/matron -f 1 but not sure how that works with ~/norns/start.sh)

EDIT II:
I’ve continued playing around with this and wanted to share some results and blocks:

In order to handle the Figure out clean way to have both the regular lua repl and fennel repl available via maiden TODO I added a extended the matron engine with some lua functions to toggle back and forth between interpreting repl commands as lua or fennel (this commit as a part of this dev branch). With this, it the repl defaults to evaluating lines as lua but _norns.enable_fennel() will switch to fennel. ((. _norns "disable_fennel")) then switches back

The open issue I’m playing with now is how to send multi-line expressions to the repl via both the maiden web ui and my editor repl client. It seems like the repl server expects input to be one line and the web ui repl is able to send multi-line forms by replacing \n with ; for lua, which doesn’t work with fennel. I tried to extend the maiden web ui with this change, to allow it to work with fennel too, but I can’t get maiden to build so I couldn’t test it.
Ideally the repl server could handle receiving multi-line input. I wonder if folks have looked into that before

I love Fennel and I am exploring Norns – Has anyone gone further with this?