Samples from a collection of field and radio recordings made in NY and Paris, arranged/mixed in Logic and fed through the “Sphere” convolution effect in Logic’s Space Designer.

Oooohhh great effects. In my ears this sounds great. No music just effects…? Or effects are music? This really pinpoints the theme of the week (as I interpreted it).

Do you have one (combined) or three (separate) wine glass loops that you take thru your modular?

A simple two-note loop made in GB, run through delay and plate reverb in ToneStack, cleaned up and layered in Audacity. I wanted the reverb to do the talking, and have it build in terms of shimmer and size— there’s an almost cinematic tension to it that I found compelling; a montage, a slow tracking shot across a room, a barren landscape, something dramatic …

The technique I chose to foreground is Auto-Tune, conveniently available via Soundtrap. I set the Auto-Tune to only allow a single pitch through, and ran it on some acapellas by Depeche Mode and Talking Heads, along with some Coltrane. https://soundcloud.com/ethanhein/auto-tune-salad-disquiet0241

thank you. much appreciated. unfortunately, i have only been able to pass one single combined wine glass loop though my modular as my little travel kit has quite significant space and size limitations (and has therefore only one external audio input)……….i might revisit your idea (of routing separate tracks through my modular) in about two years time again when i’ll be able to access my complete modular system again. until then i’ll have to regularly take up the challenge of tickling as much out of this cute travel kit as possible. happy limitation breaking:)………awwww. 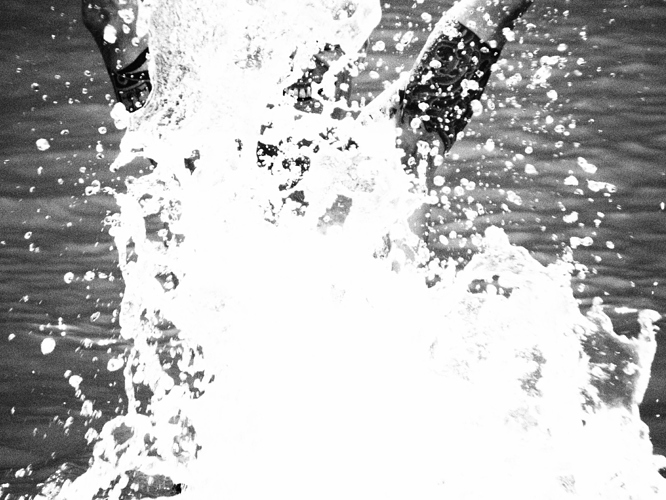 Foreground Effect (Disquiet Junto Project 0241)
for this project i used so much effects as never before.the hardest thing was to keep the feel of the feel that it has without the fx,which was the real challenge for me.so i tried such an amount of different gear which was already out of my mind. did´t want to use any stretching or other stuff that smears along.
there are seven tracks, and these are the fx i used.
for track one a instrument rack using a preset sound from NI Microprism and
a Operator sound both run thru +phasor,pecheneg tremolo and anarchy rythm.
track two uses a sample i made with pong deluxe and treated it with a grain delay, beat repeat and delay.
track three uses a drum rack with lots of small percussive snippets run thru
grain delay and beat repeat so the original sounds disappear and only the rhythmic structure stays,corpus, jo.pitch and a flanger.
track four and five are the pong deluxe again ,one track i recorded the other one was played by pong throughout the whole track while randomly played the bass.both tracks without fx.
track six is a sound i made with the phase distortion synth uses ak´s graindelay and a flanger.
track seven uses a mellotron sample run thru a flanger-joystick effect rack
and autopan.
thats it.
ps.hereby i want to thank 337is for the great support to get my Classic Keys working again.

The samples at the core of this are a drumloop, a speech sample and a Duduk sample (a type of flute), Max users will know them well… The sounds pass through a set of tuned bandpass filters, tuned comb filters, waveshapers and IR reverb (though not using traditional reverb IRs). Although there is plenty of smearing occurring here, part of the aim is to retain some characteristics of the original material. The filters are tuned to a scale, with the pitch of each chosen at random from that scale, every 8th beat there is a 3% chance of each filter being assigned a new frequency (and there are 40 altogether). The IR reverbs is loaded with a randomised selection of 1 second slices of Point Line Cloud by Curtis Roads.

This is performed in Max. For Max enthusiasts: FFFB~ is the bandpass filterbank, with the pinging notes sounding when the frequency is changed. These run to output but also drive the phase inlet of wave~ to create the digital distortion present (thanks Audiomatt : ). Double stacked comb~ objects make up the comb filter section. The wonderful sm.sallenkey filter is at the heart of the chain, and then a quad multiconvolve~ setup with the reverbs running in series is at the end of the chain. The final track is a mix of four takes, each with different source and effects settings. Modal_change serves notes out to the filters.

patch two described here creates a clock, or series of impulses, and the basis for this junto was a modified version of that technique 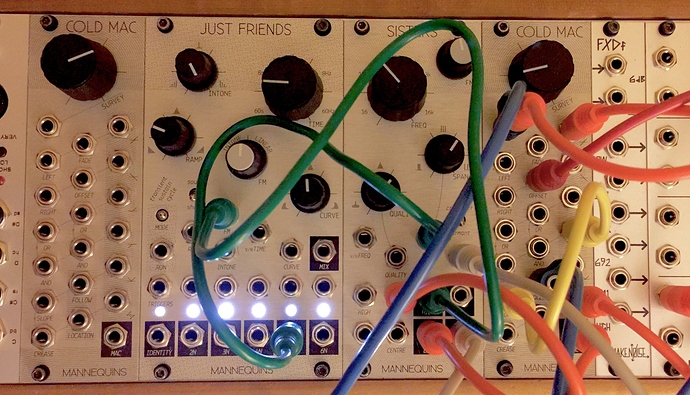 Tips: Whatever VCA you use for clock/pulse, volume should be at MAX . JF in SHAPE + 3S in FORMANT mode . Knobs as seen above except JF ramp, sweep each FM to taste (especially on 3S…)

Here is my take on the Disquiet Junto project 241. It was done in Native
Instruments Maschine standalone. I played some random sounds from the
default sound library (i think) and then passed them through series of
effects like LPF, HPF, grain filter, resochord, metaverb, saturator and
chorus. All was done in a single take (real time). The idea was to try
to unify the sounds with the effects as the only common thing between
them.