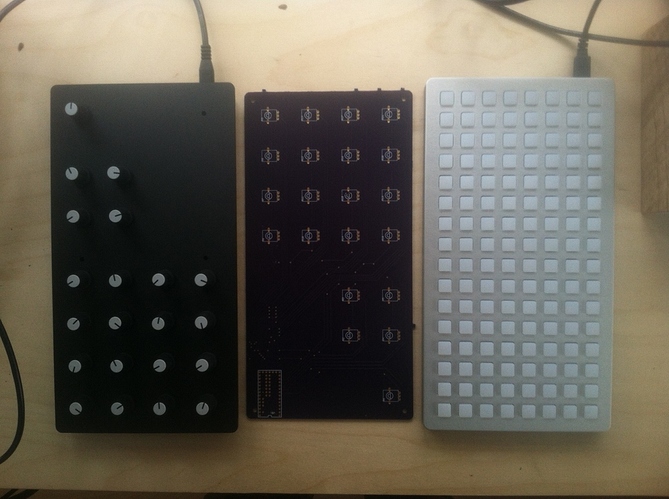 i basically created a 128 grid sized shield for the teensy 3.1. or, it could just be considered a very expensive wire harness. the board uses the same high quality Alpha pots we import directly for our eurorack modules. the teensy code has one stage of noise filtering and is incredibly responsive.

this is quite possibly the nicest dumb-knob controller i’ve ever used. there is no dead zone on either end of the potentiometer with excellent linearity and virtually no noise.

i designed this form factor with intention of mounting it in a leftover walnut enclosure i have, but i ended up just hand-drilling a top plate and using it enclosure-less.

that does look super fun!

meant to post earlier, to show how super simple the teensy firmware is:

i’m interested in the assembled one . also if you have specs on which knobs would fit i’d appreciate that

yes, there are 21 analog inputs, no multiplexing. the PCB literally is just a wire harness to the headers of the teensy. let me get the files together and i’ll post them.

making a custom midi cc layout with the teensy is ridiculously easy, by the way! a great first eagle project if you want to get into that sort of thing.

I have to ask, though, why midi when the teensy gives (as I understand) 12 (or 13?) bit resolution? Why not just use a simple max patch to quantise/reduce the resolution to 128 values upline of a midi application, and use the full resolution for max patches, where you could really benefit from it? Or maybe I’ve misunderstood the whole concept.

i wanted something to control aalto and kaivo in a completely plug-play manner, with no programming/patching. this did the trick. it’d have been faster to just go buy a midi controller, but being able to use high-quality pots was important to me.

firmware of course could be easily modded to use more bits and send serial, hook up to max. but 128 steps on a tiny knob is pretty decent resolution for my purposes. if i were using large knobs, it’d be a different situation.

6mm D-shaft. pictured are selco, which we use on our modules. i’d be happy to throw those in. there aren’t a ton of options for 6mm D-shaft. most are 1/2" which do fit but are a little wonky-- some people don’t mind and do this with their eurorack re-knob jobs. e-mail info@monome.org for further talk about this!

This is very interesting to me, because I’m very keen to develop a high precision controller - I hadn’t considered the knob radius aspect.

well, with a knob what you sense as “responsiveness” is how far you move the knob until a data “tick” is measured. there’s a point where more resolution isn’t at all helpful-- you’ll run into mechanical limitations (force required to begin movement, or if you’re in the ball-bearing universe-- the tiniest force will register changes-- this happen often with the arc, so a lot of software filtering is in place to reduce the resolution, effectively.)

to have this same sensitivity with a twice-as-large (in circumference) knob, you’d need another bit of resolution.

Would actually be interested in buying the pots for this since you’ve sourced high quality ones but building in a custom format, what is the potential for that?

i’d rather not get into the business of selling pots-- i have only a tiny handful for random projects, as we order according to our euro module BOM, and i don’t expect to be putting in a new order. but, there are easier ways to get these-- we simply needed to import a very specific pot. in general Alpha is very high quality. see here:

what was this doing in the “bright light…” video? controlling mlrv?

not strange at all

grouped into powers of four: 1, 4, 16. to address different levels of granularity

i like this layout concept. can you elaborate on how it relates to aalto?

can you elaborate on how it relates to aalto?

say i had four instances of aalto, each arpeggiating

1: global parameter, to all instances
4: cutoff of bandpass filter, per instance
16: columns assigned to instances, so four per voice. timbre controls, similarly mapped per instance.

of course, this is freely assignable, just a standard midi cc.

I don’t want money, I want projects! So PCBs, part finished kits that fell by your wayside, send me your unloved, your discarded, your misfits, send me your white elephants and boards you never got round to finishing, send me your Raspberry Pi and Arduino interface cards or eurorack bits and pieces, rails and such and you can have one. No money. I am not productising this, this is tehn’s harness and he has given me permission to swap some excess boards when these few left are gone its gone.

I have found RS Stock No.729-3426 pots I like best are these Metal Shafted Alpha Pots 10K Vertical 20mm to be perfect with a centre detent type which I like for sitting at 64cc, its nice to know when you reach halfway on a MIDI Sweep. They snap in and fit just right. The mounting pin holes are small.

Here is my pair… they make absolutely beautiful general purpose knobs in an arrangement I get on with… I have top plate designs in frontpaneldesign.

PM is best or email clive.grace@outlook.com

I have some spare Hat Knobs to trade if anyone is interested, not cheap but physicality is important. 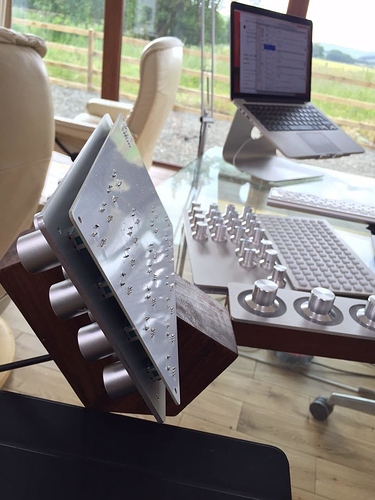 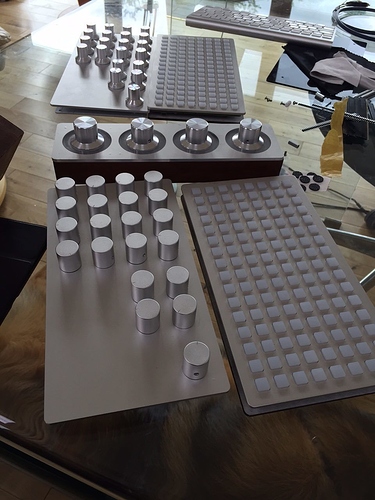 just wanted to say that this looks absolutely beautiful!
don’t have anything to offer, otherwise i’d be all over this.