I’ve got some AtMega32U4’s on hand that I plan to make a USB-Midi dongle from. Would be interested to see your code…

Anyone tried their Norns or Norns Shiled with Novation Launch Control or Arturia Beatstep?
Can Norns successfully power them over USB? I’m looking to expand my control options for Norns shiled and looking into readily acessible options since overseas delivery are kinda no go right now.

I’ve plugged a beatstep pro into Norns and it did work fine. Power wasn’t an issue. 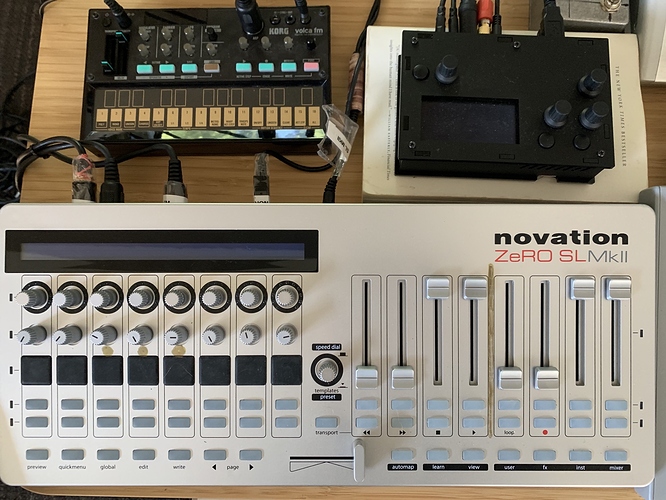 A shoutout to an old friend and perfect norns companion - the novation SLmkii series controllers. They’re great controllers (if a tad bulky) and secretly a MIDI interface. I had been using them for years and meticulously made templates for different gear but just realized last night if I attach norns via USB then not only does norns get access to faders, pots, encoders, buttons (and a fatar keybed on the keyed versions), but it also equips norns with bidirectional DIN midi! Now it’s super easy to clock and sequence norns, or have norns sequence other gear.

I’ve got the zero key and 61 key version and bought each for 100$ or less as they’re not the sexy new thing anymore.

Novation seems to pack a bunch of handy stuff in their affordable gear. I held onto my Ultranova for several years just because it was usb-powered and had audiointerface built in, it was just so simple to plug-in a single cable into a laptop and have both audio out and a controller.

The footswitch is based on this guide from adafruit. I’ve just added a second switch and wired it into the same Trinket M0 microcontroller. The Trinket can do 4 switches, so maybe a larger one is next?

I finally had a chance to polish this a bit. In the end I simplified and moved away from I2C in favor of Serial (TX/RX). It’s bi-directional meaning you can use with Arduino for input or output and change on the fly (contrary to the arrows in the image). I’ve put the code up on Github and here’s a video showing it in action with Ableton Live, an Organelle, and Norns/Fates. I’d be keen for anyone with some Pro Micros (or 32u4 compatible boards) to test and report back so I can squash bugs.

Eventually I plan on making a PCB and enclosure to make the whole thing a bit more compact.

I’d like to ask about MIDI mapping the Norns - will something like the Faderfox EC4 be able to control Norns without value jumps? Are the mappings saveable on Norns?

Yes with caveats. I use the EC4 with a mix of absolute and relative encoders. Something like main volume I prefer absolute to see the current value on the EC4 screen, whereas relative encoders don’t show useful feedback.

So, it sounds like when loading a preset/saved patch, there will be no value jumps for each and every controlled value? Thanks for the info!

Seems like my m-audio uno is a bit broken on it’s side(no more clock signals only note on and offs). Does anyone have some good midi interface recommendations for norns?

@Justmat the Apple Magic Trackpad stuff is super cool! Do you (or anyone else) know if it’s possible to get multitouch and pressure data out of one for use with norns?

I tried for a bit, but couldn’t figure it out. I was only getting x, y, and click. It would be awesome if you could use multi-touch!

there seems like there’s a lot of quirky linux-fu to get it to recognize.

Let’s say I was to explore this. Would the path to getting it work be:

as a side note, trying to understand https://github.com/okyeron/hid-demo

I can’t tell where hid (singluar) is defined. it’s the thing (table, I think) where you are getting devices, vports, connect, etc. can you explain that a little bit?

I’m looking at the faderfox lv2… I have a mio2 midi interface so the lack of USB shouldn’t be an issue right?

the joystick is extremely enticing

Just got a Fates build that I’m expanding into a hardware setup - anyone here achieved just basic midi clock over USB with an Analog Rytm?

it’s probably going to depend somewhat on the specific scripts you’re using. Each script has it’s own midi/clock implementation.

What script are you using? What are your physical connections between the devices? What’s working/not-working?

Late reply: iCM4+ works seamlessly with Norns/Computer integration. It definitely gives you enough rope to hang yourself with in the config tool (you can totally get into midi feedback loops), but if you set it up with care it’s brilliant. I’ve taken to just sending all midi events to the computer and using http://notahat.com/midi_patchbay/ to filter and route.