I keep looking and looking, and I can’t really find a decent answer, but does anyone have any recommendations for recording (from mics) into norns?

I saw some methods: zoom recorder → Headphone out, and using a preamp, but any other suggestions?

Yeah, you’re going to want some kind of preamp with line level output. A zoom or other handy/pocket recorder is a great way to go. Fairly small, battery operated, useful for other things as well. I’ve used my zoom h1n and some clippys (similar to the LOM mics) to grab bird and frog sounds around a pond while jamming on norns with a grid. Everything running on rechargeable batteries and it all fits in a surprisingly small bag and just works. I can personally recommend it.

There are of course compact desktop mixers with mic pre’s and dedicated mic pre’s.

I have a mic pre module in my rack, it’s not super clean but it works well enough since I usually heavily process any audio there before stepping down to line level → norns.

I’ve used some little home made contact mics stuck to the body of the norns straight into the inputs (might be a terrible idea) to capture the sound of button presses and finger taps on the housing and another with a longer lead pressed to my throat for really lofi vocals and fed that into mlr.

Is there another option I’m missing? Mics with their own built in preamp?

New grid owner here do you guys have any recommendations for a good portable external battery to power both Norns and Grid?

It runs just fine off usb power, so any nice usb power bank is great. I love my Anker PowerCore, but honestly with the demand created by cell phones there’s so many great usb power banks it’s really hard to go wrong

The Piezo Box by Tilde Elektriske Kretser is an amazing sound source for CC2! It’s so incredibly well made, a piece of art worthy of sitting next to the new monome grid: 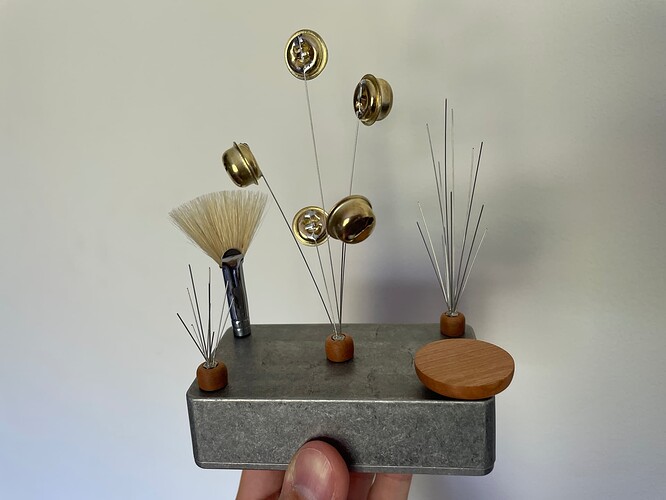 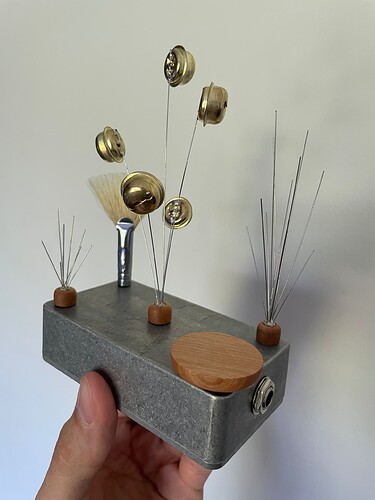 Been investigating the same thing myself.

Was wondering if something like this might work without being attached to a computer or other device? Just run the audio outputs straight into Norns (or Fates in my case).

Also, thinking on it further, could it also be powered from a USB port on Norns/Fates?

To follow up on this, I decided to give the Yamaha SC-02 a try. Mic input and stereo line in. Will see how it works out.

Practice by yourself, or link together with other players for a band rehearsal or jam session with no hassle, no space restrictions and no disturbing your neighbors or family.

I was messing around with micro:bit a little more, and cooking up throwaway MIDI sources through on-device livecoding in Python was kind of straightforward (once I’d figured all the pieces).

Okay, humans of lines. I am soon going to have a lot of money kicking around to buy a new piece of gear. I know the OP-1 is the traditional “friend of Norns”, and obviously can be nicely integrated with it - but at the same time, Organelle’s open source nature (and lower price!) is pretty attractive.

Has anyone tried both Organelle (M) + Norns and OP1 + Norns? How do they compare? For the price of the OP-1, I could get an Organelle and a second Norns Shield; has anyone tried that setup?

I have both and I like them both for different reasons. I haven’t had a lot of experience using them with Norns. I love the whole integrated system aspect of the OP1 you have all these tools and they are all interacting with each other… you can record and sample and manipulate it all. The Organelle on the other hand depends on the patch that is loaded. You aren’t going to have the same kind of integration with all those engines at once… The closest patch that I know of is ORAC and that’s a pretty different beast. On the other hand - I find the Organelle to be so much more surprising and the sounds to be so much more rich. I think it might take more effort going in but the payoffs would be better. If you get your hands dirty with Pure Data you can extend it even further (I’ve seen some hubub about people porting SuperCollider to Organelle, I haven’t tried yet) you’re never going to be able to do that with an OP1 unless it’s in a hacky way? My 2 cents are in…

I have an organelle m but no op-1, someone here will no doubt have both, so while I can’t give a direct comparison I found that the two play very well together through the midihub by blokas using the usb midi i/o.

The issue otherwise is that they are both usb midi hosts so you can’t just link up usb between them.
This DIY host to host connector, by @okyeron would also work.

The organelle also uses 3.5mm type A midi jacks so you can run out of norns into a usb to midi interface cable then into two 5 pin to 3.5mm jack converters. 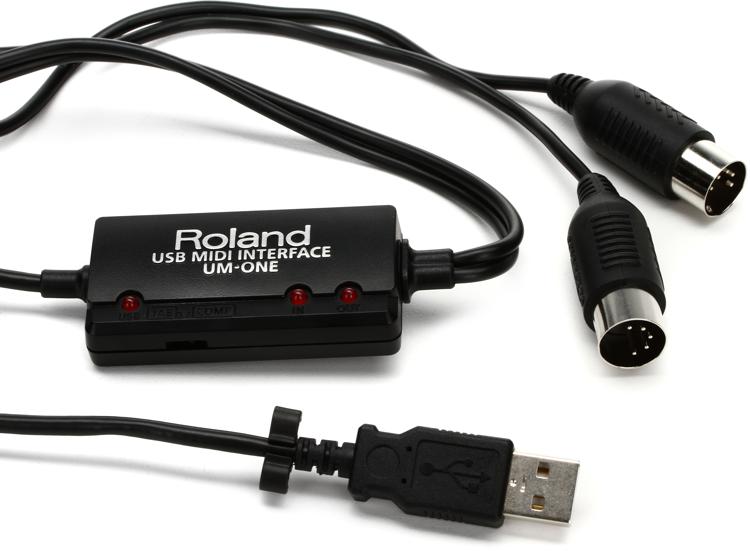 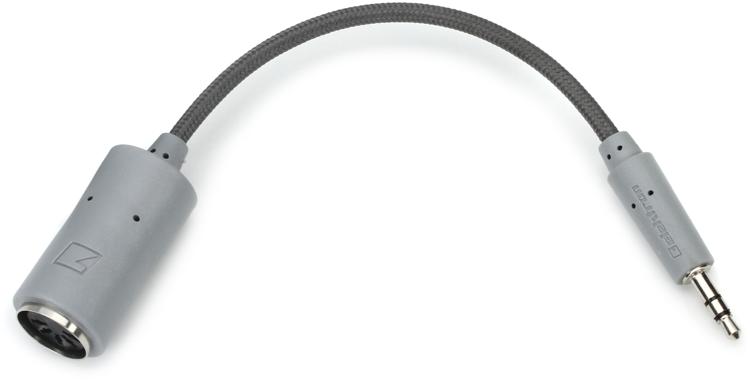 Once you have them talking the possibilities really open up.

Audio wise it’s all super simple. I like to run audio from one through effects on the other because they are both super versatile sound computers. Orac in particular is a great reason to have an organelle, it brings so much versatility.

With two norns and an organelle you could do some really fun chains of sequencers, synth voices, and effects running on each machine. Rapidly approaching more patching possibilities than there are grains of sand on the planet.

as far as norns friends go… i’ve owned both the op-1 and the organelle, i sold both.

then i re-bought them both.

i ended up selling the organelle yet again, and sticking with the op-1. i found coding for norns more enjoyable and as a result never felt inclined to code on the organelle. this might be why i found op-1 more useful/enjoyable?

both are awesome, and it will largely depend on your personal approach. there isn’t a bad choice here, just different.

I am sorely tempted by the idea of a fully open source chain of sequencers, synthesizers, and FX, but I might try out the OP-1 just to see what I’ve been missing this whole time!

to all and thanks for the advice.

Got one of these recently and it plays really nicely with either OOOOO or Barcode, but almost anything with audio in is foolproof for it - only caveat is – have managed to spike myself a few times on the piano wires, tempted to pop a blob of solder on their tips.

what type of stand, similar to a phone stand or otherwise, safely secures norns shield to keep it off the desk?

They’re a perfect size for a Digitakt so they might actually be big for a Shield. I have a few which I use for a small Eurorack case, a Digitakt, and a Bam and Boum.

They do benefit from a bit of structural bracing. I used sections of PVC pipe which I glued to them.

I also have a Loci stand: https://loci.life/ which I use for my mixer. I like it and may get a couple of smaller ones. It looks like a “Dinky” stand might be Shield-sized.

Update: some photos of the stands as used. YMMV! 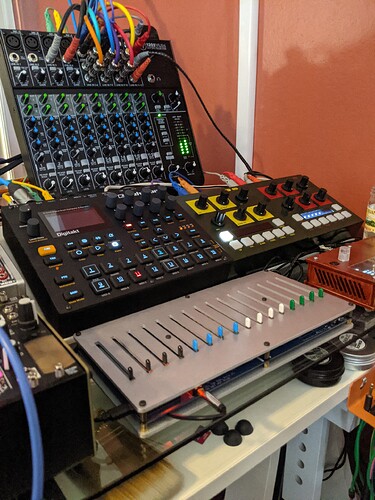 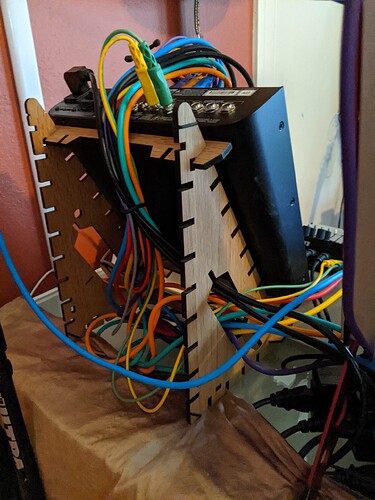 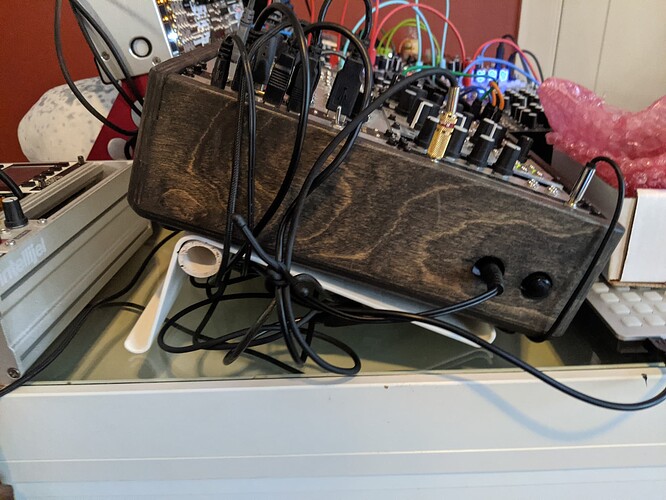 Hi! I’m currently rocking a fates running cheat codes + eyesy in parallel, and having grid+video output+a midi controller is very hard for my 1.5A wall plug, And is putting a lot of noise at 100 hz.
Can you reccomend me a silent one? Do you think 3A is too much?

I use a raspberry pi branded power supply at 5.1v 3A so it will be fine.

I have a fates running a rpi4.

Worth investing in a high quality power supply.