Looking for suggestions for alternations to the Make Noise Function. Same relative footprint.

What are you using and why?

I’m with @glia. And turning it around, why not a Function?

I have a Maths rather than a Function. I have a bunch of more traditional envelopes, so I tend to use the Maths more for slewing.

Other similar modules to the Function… WMD/SSF Mini Slew? Doepfer A-171-2 VCS?

I quite like peaks in my skiff. It’s ridiculously versatile overall. In the envelope domain it can be ad or adsr, double or independent.

That being said, I couldn’t give away my maths. Not only because of it’s other options, but love the snappy envelopes.

The quadra is also great, with its 4 ahd log attack/exp decay envelopes.

I’ve also been very happy with my Maths but have been tempted to look at Xaoc Samara and a Mini Slew as an alternative in a new case I started. The Mini Slew looks great!

Thanks for the replies.

I had a Mini Slew at one time… that’s a possibility.

Function? It’s more an avoiding Make Noise than anything else. I know, silly.

In addition to those suggested above, the WMD Multimode Env (the stepped stages sound pretty interesting)? Intellijel Dual ADSR?

Mini Slew is closest in terms of complete functionality (no pun intended) - i.e. it can slew, tho you still miss the ability to hold. If you just want a AD envelope with EOC in a small amount of hp look at the Qu-Bit Eon or the 2hp ENV

If you like the voltage control ability, and you want a slightly smaller package, the ALM Pip Slope is super fun. Also the Pittsburgh Envelope has more or less the exact same functionality of the MN Function, just a switch instead of a button for the cycle mode. I think the Malekko Envelator is similarly equipped.

Function? It’s more an avoiding Make Noise than anything else. I know, silly.

Maybe but hey, we all have preferences. I, for one, love Tony and co. but have other (not entirely rational) biases. 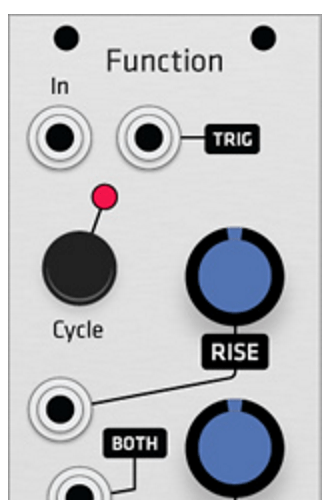 I hear you. Very nice aesthetic and something about them just feels right. The tangle quartet looks really smart too.

something about em draws me

That being said, I couldn’t give away my maths.

It’s one of the only modules I miss from my old euro modular!

The WMD/SSF partnership is really knocking these bread and butter modules out of the park. I’ll have to play with one of these when I’m at Control Voltage next. Great suggestion!

I feel so much the same way. At MiM I was blown away by the different Taikos. All the audio demos I’d heard of the Dinky’s made it seem a little… dinky… but in reality it has some great low end and can really fill out the spectrum.

(I appreciate “devote the space”, but Maths should absolutely not be thought of as two Functions; it’s much more for less space than two Functions).

What are you mainly using a Function for: envelopes? Looping envelopes (LFOs)? Slew? Filtering? The EOC/EOR outputs? How important is CV control?

Depending on the priority of functionality might offer different results. (For instance, Peaks is great if you like LFOs and or Envelopes, but no good for CV control, slew or EOC/EOR.)

I just wanted to give a little bump to this thread because my small system gives me a lot of opportunities to try different things.

While I have a Three Sisters for most of my filtering duties, I’ve found that with a lot more wildly rich sound sources (some of the sounds from Tides Parasite/Sheep, Warps distortion and wavefolder) filter more pleasantly through the Function-as-filter. Especially with regarding modulation and being able to patch into the various points (up, down, for more complex patterns or non-patterns. I wonder if anyone has done a comparison between the different slope generators’ filtering abilities and how they would compare? The Exp/Lin/Log on the MN Function does seem to have some benefits to it there, but I don’t have the other tools to bear out any comparisons.

Did you ever make this decision? I have 10hp left in a 7u system. Was saving it for 3 sisters, it already have qpas in another case and not sure if I need 3 sisters or just feel the allure. I have a maths I am going to sell because size. So function is in the running. I have moog semi modular racked so there are filters there too. Looking to pair with phonogene, optomix. I really love whatever is most playable by hand.

I quite like the After Later Audio Tilt, which has some bonus features such as a sustain, bipolar/unipolar switch and onboard attenuverter and is only 6HP. I think the attenuverter makes it very playable, like a Maths channel. However while I initially got it to replace Maths in a small rack, I ended up keeping my Maths as I got more into complex gate manipulation, subharmonics, and waveshaping patches…