after some more months of trial and error, i’ve compiled an up to date walkthrough for getting puredata and the grid to run from scratch on the raspberry… you can find it here: https://docs.google.com/document/d/1X6XEBOFWkDXBDxmBkIWtTUYur-g2f80m3U3KS3RrLB8/

dear all,
coming from a mac and max/msp and with no clue about electrical engineering, raspberries, pure data, github, compiling files and all the like, i was able to build myself an embedded sequencer with gate/clock input within ~4 days

(not meaning to brag here – just trying to encourage anyone to do the same as it’s much easier than i thought and so incredibly rewarding!).

i had massive help from dan (@dan_derks) and paul (@pxxlhxslxn) – many of the steps listed are actually copied 1:1 from their messages. others i gathered from google, electronics.stackexchange.com (a guy by the name of “Volodymyr Smotesko” was super helpful) and obviously the monome docs (thanks to brian @tehn, as always).

i put together a detailed, low level list of to-do’s for anyone who’d like to give it a shot. following these few steps is probably all you’ll need to do to get it to work.

the PD patch is roughly based on a very slimmed down version of a monome 256 sequencer i’ve been working on the past ~1.5 years. i’ll happily share it, but i’ve never managed to finish a 128-version so i am thinking it may be to exotic to drop it here. def let me know if you want the application, how ever – it’s running well and i’m hoping to make a new video of the current state sometime soon.

here’s a short clip of the (new) PD sequencer with the rPi and a little breakout-box: https://youtu.be/5BPoXEU9Nzc

note: this got me reeeeelly confused! so many weird PD versions around!

… to sum it up as i understood:

· pd-extended is dead; besides it having tons of externals pre-installed, there’s no real necessity (reason?) to use it.

· pd (vanilla) is maintained. since its new version, it has an external-manager (referred to as “deken”) implemented – you can download externals via help » find externals. the cyclone library ports loads of max objects.

· pd-l2ork (or purr data) is a different version that’s supposed to run well on rPis (if i get this right). this is the version i am using, because: there is currently no rPi build of the “mrpeach”-externals for pd-vanilla. these externals include all the OSC and UDP stuff you’ll need for the monome. i’m sure with a little more research it’d be possible to use vanilla pd, but – i’m still at the very beginning. so »

to sum it up: on my mac, i’m patching in vanilla pd using the cyclone v0.3 and mrpeach exernals. on the rPi i’m running pd-l2ork. transfering the patches from one to the other is almost seemless, but due to the fact that pd-l2ork runs cyclone v0.2 on the rPi (as apposed to v0.3 on the mac / pd vanilla), there are some small perks as for a few objects; weirdnesses such as “Uzi” needing to be spelled with a capital “U”, arguments for some objects not doing what you’d expect them to do and so on. you’ll become aware of this quite quickly. also, a cyclone v0.3 build for rPi is in the making and should be released within the next few days (https://github.com/porres/pd-cyclone/releases)

important note: i am only able to run serialosc by executing serialoscd (with a “d” at the end). don’t know what’s up with this; maybe @tehn knows – but it appears to work this way

think all the following is from the docs:

note from paul, if something doesn’t work:
alright, here’s what I had to do to get it working:

edit as of JULY 10: finally found out how booting works into desktop and/or command-line interface. my route may be kinda messy, but this works for me

this is no necessary step, but it’s handy to have. i have my rPi connected to the local wifi and can update/upload the patches without needing to unhook it from my modular.
follow these instructions: https://www.elektronik-kompendium.de/sites/raspberry-pi/2007071.htm – notice: it’s probably enough if you only do all this for user “pi”. important: use absolute paths in smd.conf file (so smth like /home/pi/Desktop/share)

note that this circuit only works for gates! the GPIO pins on the rPi are digital and we’re not ADC’ing. yet, it’s very doable (i’ve read you may want to use an arduino for the translation) and if anybody wants to add an instruction, that’d be cool, too!

you’ve got LOADS of inputs on the rPi, so the sky’s really the limit here, i think.

the circuit we’ll be using is dead simple. parts per input cost a buck including the jacks. just mind the direction you’re putting the 2N3904 in – and don’t forgot to ground your jack input (…benni 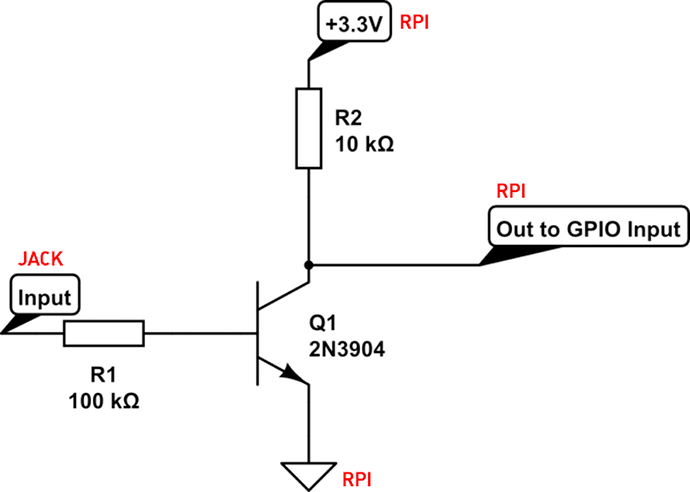 (if you want to add LEDs, too, go this route: tinyurl.com/y7dklshl // Note that R3 there must be of high value because it lowers the output voltage. You don’t want output to be too low. The LED will be inverted just as the outputs: when the input is low, the LED will be ON. R4 can be replaced with 560 Ohm for more brightness.)

7) IN PD: ACCESSING THE PINS

note: it was necessary for me to run pd-l2ork as root (sudo pd-l2ork) for these externals to work! to get the current states of pins, you need to poll them (use a metro at a high interval – i’m doing 1ms)

that’s it! have fun!

woah, kudos for taking the time to share all of your collected knowledge with the community!!
immensely useful for anyone diving in, but especially with no prior knowledge

it really feels like a revival right now… should dust off mi pi too and join the headless club.

it really feels like a revival right now… should dust off mi pi too and join the headless club.

absolutely! for me as an absolute novice, this is such a neat thing to do… finally having what feels like a standalone sequencer – and even having it speak to my modular is … just … woah!

tbh, I partly blame the excellent monome eurorack modules for the dust

but building your own stuff is really another experience. and also less expensive with something like a pi. and much more flexible. you also made it super accessible now.

hey benniii, awesome work collating all this together! just a quick note though, the steps described in section three are not my work, but from the amazing @rknLA on the Raspberry Pi + Monome thread.

Thank you! I am totally going to use this guide.

I’ve been looking at the new Raspberry Pi Zero N for exactly this application, which given its wireless/bluetooth capabilities would require changes to certain elements of this cookbook, but not many.

Does that HARDWARE: ADDING CLOCK/GATE INPUTS work with the Bela platform or BeagleBone black?
How about schematic for outputs (gate and modulation)?

RPi’s GPIO pins are logic gates, meaning 3.3V is high/on, whereas 0V is low/off. Bela/BBB’s pins are analog ins. They will accept any voltage from 0-4V+ And the actual voltage value can be read from the pin. You will want a summing amplifier to convert bipolar voltages to unipolar, and also to scale the range.

You can use this calculator to find the right resistor values. 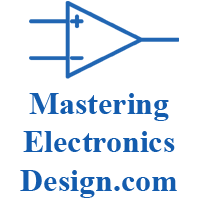 The calculator solves the summing amplifier resistors based on the input and output voltage range requirements. It is a great tool to design a bipolar to unipolar converter, as an example and other circuits.

You can use this calculator to find the right resistor values.

wow jason! really happy about that link – this is rocket science for me

… a really novice question (in line with this whole post kchkch):

am i getting it right that i simply need to adjust the values (and reproduce the circuit) on this page to convert CV also for arduino / teensy etc? i really know nothing about this stuff and am super eager to learn some more, but i’ve read that a good route to get analog voltage into the rPi is via one of these microcontrollers…

and what would happen if my input-signal over/understeps the voltages (-5/5) i’m preparing the circuit for? apparently this happens in eurorack-land?

thanks for this link, very appreciated!

I certainly can’t claim to be an expert. Just now learning about these things for the first time myself.

And that calculator leaves a ton of wiggle room, so I’m not 100% confident about the best way to use it.

But you’d want to put your input ranges into the top two fields (for eurorack that’s usually going to be -10V to +10V or -5V to +5V) and the output ranges into the next two fields (0V to +4V for Bela.io). Then you want a reference voltage. I use an IC to get this and I’ve ordered 3.3V reference voltage ICs, if I remember correctly (all this stuff is sitting next to my breadboard right now waiting for me to get around to it). Then you play with the resistor values until everything lines up. You want to choose resistor values that allow you to use simple and common resistors, so you aren’t overspending on weird resistor values.

The circuit scales voltages. So, in the example above, -10V becomes 0V and +10V becomes +4V. You can make them scale to whatever you want. Just use the values appropriate for your use case.

The consequences of getting it wrong can involve releasing the magic smoke. For example, you really don’t want negative voltages of any kind going into a Bela analog input. It will fry the board.

As for out-of-expected-range voltages, I think you can protect yourself from that using diodes. This is something I haven’t investigated as deeply yet.

this is great!!!, i just got two raspis for devel so i’ll do this for sure. I have already set up l2ork/purr I am also going to add Analog knobs and ins for them but i would love to use my monome stuff as an interface for the raspis. FUN

BTW, it is essential to run headless for any heavy lifting [SPECTRAL/FFT, Long Sampling] IMHO

@shreeswifty, any good tips / tuts for running this config headless?

@dan_derks – i’ve updated the manual for the auto-booting procedure
(as i’m so terrible with this stuff, it took me aaaages! there are like gazillion ways to boot and this is the only one that worked for me after loads of approaches)

I really need to try this.

As I happen to only have a arduinome 8x8 at hand, I wonder, if your PD patch could be converted to run with an 8x8 grid.

Any chance to get a copy of that patch file?

sure… but it’s super chaotic and barely tested! it’s really only a quick sketch of the big one one for now, to see how PDs working for me

Thanks a lot, this will be quite helpful.
Some learning ahead, though.

Great!
I tried this years ago on a 1st Gen raspberry PI and some python scripts (no way that thing would run PD smooth enough) This seems like a good approach. Haven’t got a Pi lying around but trying it on a PocketCHIP. So far so got, I’ve got the crashing serialosc deamon, but if I keep retrying it eventually looks stable…

PD lork installed and runs, but I can’t find monome, I will try and recompile serialosc as suggested above