It’s simple and classic, but still worth mentioning because of how powerful it is:

This can definitely take you pretty far and is a lot of fun/very controllable. Between playing with the relationship between s+h clock and LFO frequency, the shape of the LFO, the offset/scaling for octave ranging and shifting, and changing the scale masks, there’s tons of opportunities for controllable evolution of patterns… it’s also quite fun if you start mixing a few different LFOs (or other sources) with different rates and ranges before going into your s+h…

The “patch modulator” (based on genetic algorithm) in the Nord Modular G2 is also cool as heck.

Someone tell Bitwig to work on something like this. 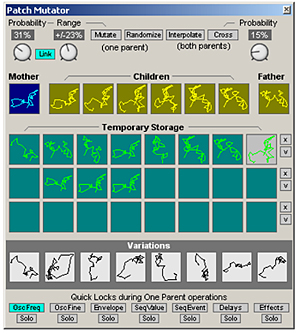 Interesting, so does it take control of all patch parameters?

I just found this reference in the Oxford Algorithmic Music Handbook:

Reminds me how much I used to love the mutate function of Metaphysical Function in Reaktor. Must try something like that in Max at some point.

I’ve not tried it myself yet, but I’ve been considering loading up one of the “Hemispheres” known as Neural Net on my Ornament & Crime. Check it out here: https://github.com/Chysn/O_C-HemisphereSuite/wiki/Neural-Net#logic-gate-reference

Both worth a read.