Spotted yesterday: Giovanni Lami’s setup at the A’larme! (Experimental Music) Festival Berlin. Giovanni’s set was absolutely stunning and unique. I couldn’t see much details, but he used live tape looping with degradation techniques (you can still see an object at the tape head on the first photo) plus Norns and Grid – I assume for layering and more. I don’t know if Giovanni is following this forum, but I’d love to learn more about his process. Perhaps anybody else knows? 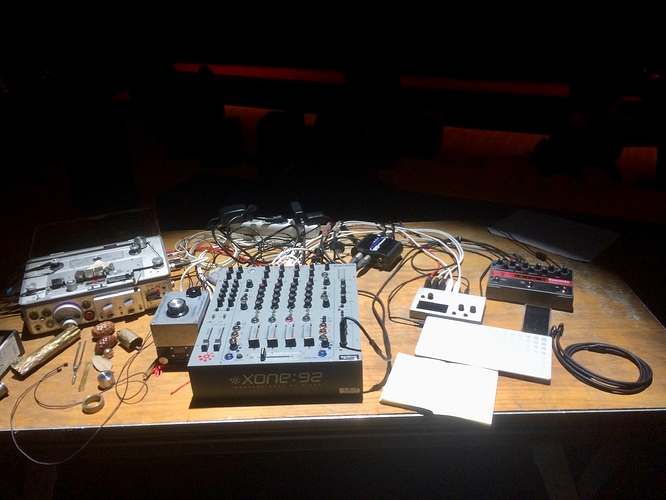 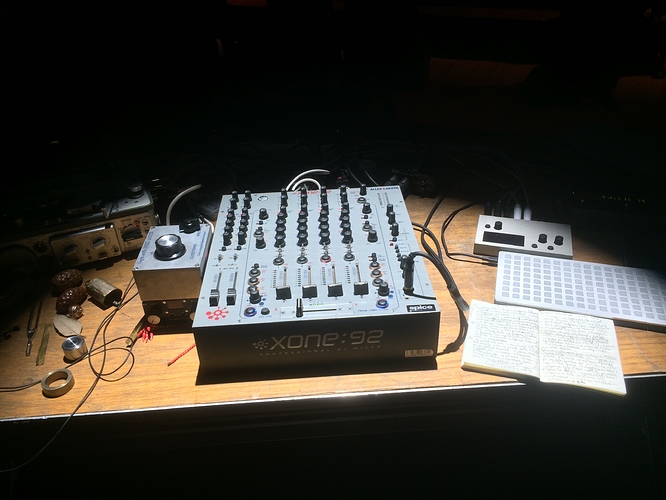 Damn, I was really hoping to make it to this, but life errands got in the way.

I didn’t expect (but also not surprised) that there would be so much monome stuff there.

Anyone planning to attend tonight as well?

I’m really glad you posted this here. I met Giovanni 2 years ago when he was playing at Transart Festival and was pretty amazed by what he does. I had been in contact with him for some time prior to that because I wanted him to play at Analogica, but that unfrotunately never happened.

His work is really inspiring, and he’s also a really nice person!

This is his Transart set btw

And here’s a few more:

But there’s lots more if you do some searching.

I spotted a famous Italian guy in the audience on that first video!

He’s right here. I’d love to see him live some day. Not knowing much about his process, I’ve been inspired by trying to picture what’s involved.

Hi all,
sorry for the delay, I came back from Berlin and I had to do a few things, take my cat to the vet, etc etc - I wasn’t online here in the last week.
First of all - thanks you all for this thread, to appreciate my work and to want to know more.
So, ask me what you want, I don’t have any secret at all.

A month ago or so I posted a picture of my studio, the setup there is more or less the same I had in Berlin + the Xone92 which is the mixer I use to perform and not in the studio. Normally I’ve a strict idea to use just three main devices including the mixer - to not dissipate energies and focus on small sound areas better. There could be an effect or not (in my solo at the moment I’m using a Eventide Pitchfactor).

A Nagra and a mixer are always part of the setup while the other device can change (depending by the project it could be an Octatrack, a GR-1 or a Norns).
Regarding the degradation of the tape. In the past I also buried tapes (different brands, recorded or not) for months in different locations then I used them. I wasn’t interested in what happened “technically or chemically”, my aim was only to have tapes partially degraded from the environment to use, working on them.
I don’t use razors or blades or this kind of stuff (I’ve never used them) but a lot of objects, on the tape itself or not and a couple of LOM microphones, on the tape itself or on the objects. The little brass foils I have in my hands on the second video are used to produce sounds, recorded on tape, using them on the tape itself. It’s something I do from years and today it’s something like a stylistic code during (a part of) the live set.

If you’re curious about something else I’m here.
Ciao!

I just want to add that Bias is one of my favorite releases of the past few years. I hope that your cat is healing well!

thanks a lot for your detailed answers. I hope your cat is well again – and kudos for the set you played in Berlin. I loved it!

How are you using the LOM microphones on the tape?

And what did you use Norns and Grid for in your performance?

Sorry, lots of questions, but during your performance I couldn’t see any details and unfortunately there was no top down camera.

Hi Ralf,
I try to be as much clear as possible, explaining everything at best.

What cable do you use to connect the Nagra to your mixer? I’ve searched online for the answer tirelessly but can’t seem to find anything definitive. I’d greatly appreciate it if you could answer; thanks!