This sounds a lot like “datamoshing”. In other words, I think that the sampler’s read head has gone out-of-bounds and is interpreting non-audio data as audio. To people saying that they love this file and would intentionally make a similar sound, I highly recommend downloading Audacity and making it force-open non-audio files. You can get some surprising results. I’ve had particularly good sounds pop out of .exe files.

inspired by the discussion of glitch sounds which are sometimes appealing in the above thread, I unearthed some of my own deliberate glitch images and sound files., and wanted to encourage everyone else to share if they have any deliberate or accidental glitch art, or make some now and share it!

I personally got into doing this after a conversation with my late friend Robert Wood, who did a lot of forced glitch visual art; I think he had hundreds of unique prints done in this way, and you can see a couple of them behind him in the linked article.

here are a few of my experiments from 2008 (nearly 10 years ago! ahhhh

). these were done by opening jpeg files of photos I had taken (plus one of my mom when she was young) with a text program (Textedit on Mac, if I recall correctly) and copying, pasting, and otherwise generally messing with the raw code. I had my best results when I left the first and last 5-10% or so of the code alone, as it seemed to be important to then be able to resave and open the file in a photo program. I believe I also had the best luck reopening glitch image files in Photoshop, which seemed more tolerant of weird code, and then resaving from there and getting full compatibility with any image software. none of these were edited in any way besides manipulating the raw code. 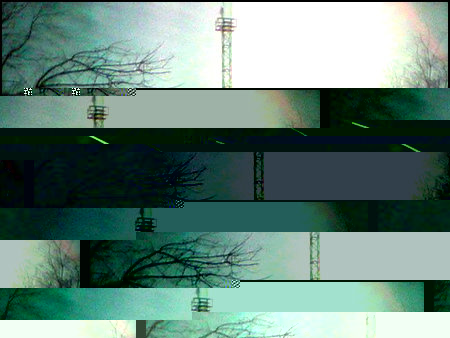 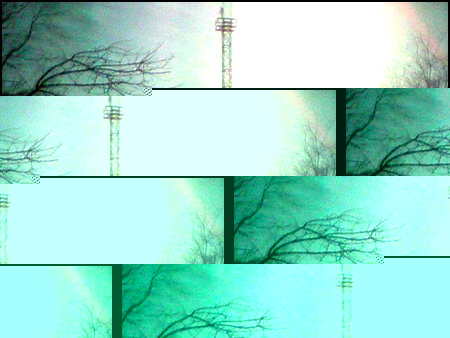 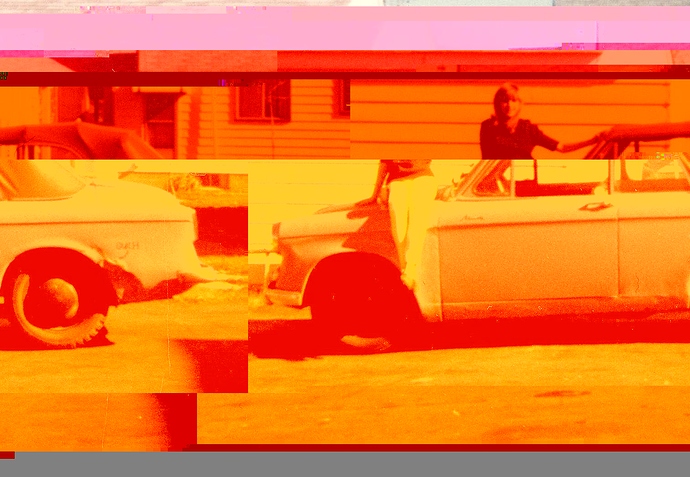 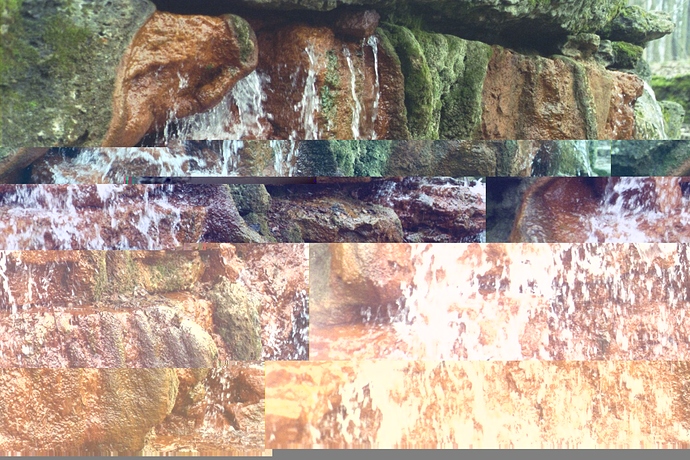 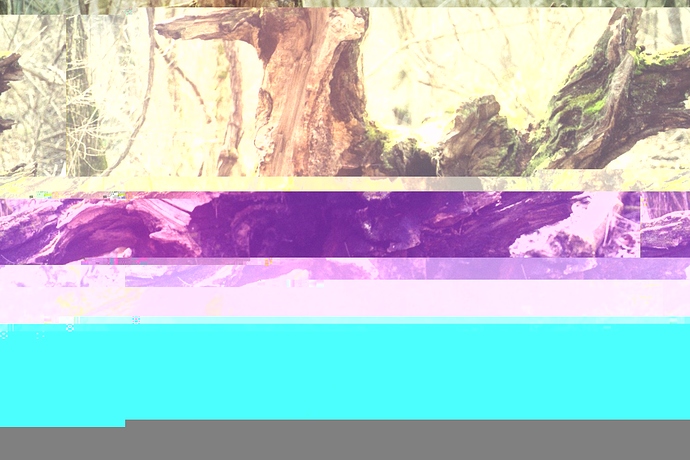 this is definitely the sort of thing that is best done in large quantities - you’ll get a lot of ugly or just totally nonfunctional files, but then you’ll start to pick up little techniques that you can sort of control things (but only sort of). you truly do not (should not?) need to know what you’re doing, in my opinion.

I also did some audio experiments like those that @trickyflemming mentioned in the W/ thread, but I was mainly editing the code from existing audio files in the same way as the images above. none of my old audio ones are particularly interesting, but maybe you have some that are?

This reminds me a lot of the work some of my friends have been doing; I played in a show last year that was focused on digital/electric/electronic work, and this artist Zach Van Horn had work up. I’m not certain of the genesis for it, but he then paints these with oils on wood panels.

Also someone who I used to work with would make these algorithmically-altered photographs, which were all pretty cool.

On the Mac AppStore, there’s an app called ImageGlitch that allows you to text-edit image files and see the results in real-time.

Aside from JPGs, I recommend text-editing PSD files. The various layers (red, green, blue) are stored in separate blocks, so it ends up producing a layered glitch effect.

I’ve always liked this sort of visual glitch art. I’ve never dabbled in it myself, but it does remind me of this ‘natural glitch’ poster I found in Berlin: 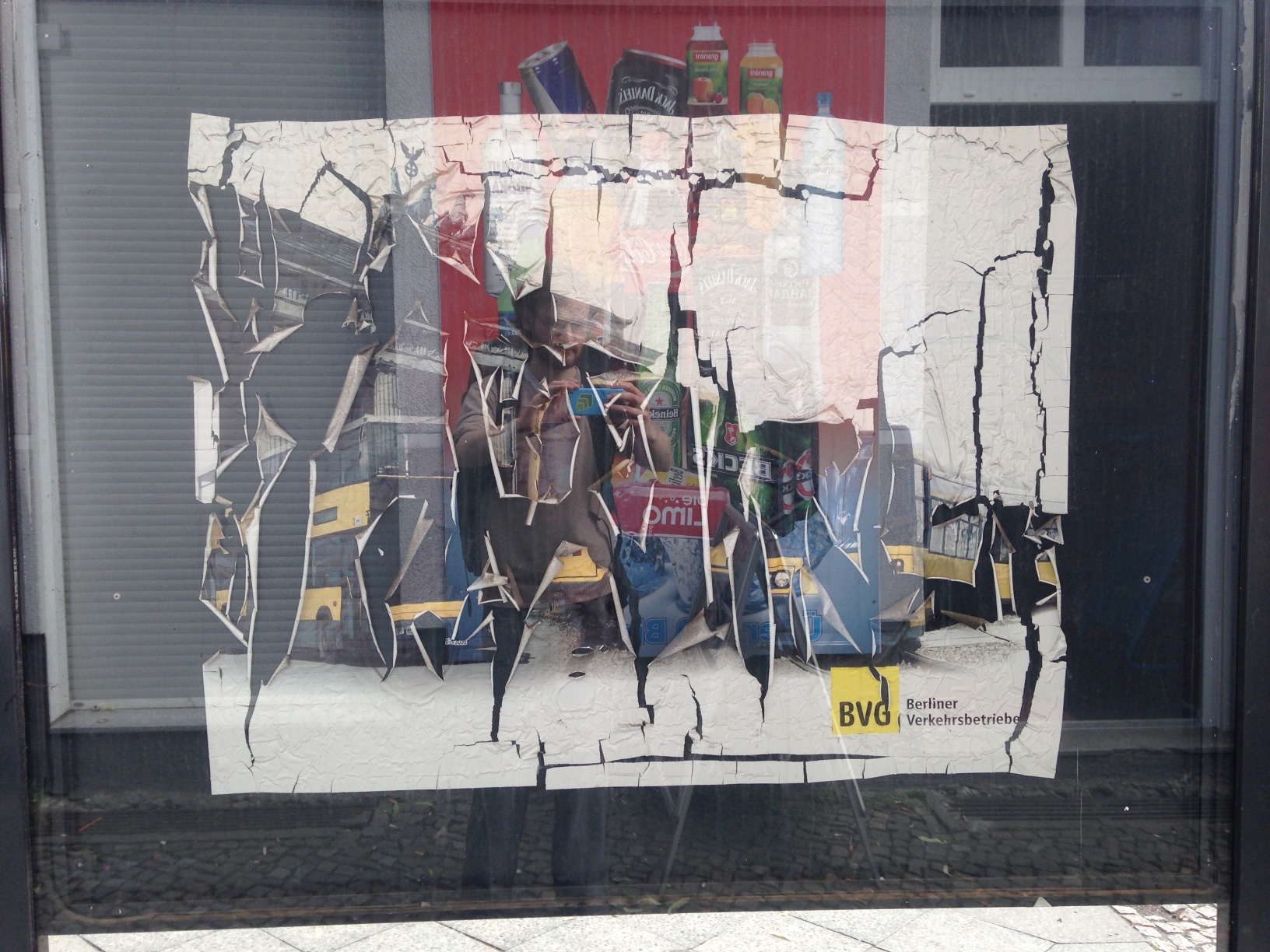 It’s nature glitching a computer-designed graphic, rather than using a computer program to glitch a photo of nature, but despite this methodological swap I find the aesthetic quite similar.

Perhaps people have already experimented with this sort of work more — I can certainly imagine there being material parallels to things like PSDs storing RGB values in different blocks, e.g. perhaps CMYK inks used to print graphics would respond to water or other solvents differently.

A semi-complete documentation of Audacity Effects on image files. This can also be found on Tumblr, if you prefer. When pursuing the wonderful practice of databending I think that experimentation i…

Wow! There are so many things to try there. Awesome link.

Well, that post just led to this one: http://www.hellocatfood.com/datamoshing-using-avidemux-2-7-0/

The link provided in the original link is broken. Here’s a link to the tutorial in that post: http://www.hellocatfood.com/databending-using-audacity/

This is a music video I made.

I’ve certainly learned a lot from watching these folks! Particularly the Pixel Sorting & GLIC Processing scripts are awesome, especially for making subtle things! The JPEG editing that @joshhh mentioned can get finicky & not so subtle, but I’ve found that the useful text edit code starts about 5% of the way down like you mentioned. Most image files have a header at the beginning that includes essential data for opening the file - once you get past that you can mess with stuff more freely without risk of the file being un-open-able.

I’ve loved that video of Linda for years @Angela! Really happy to re-visit it. (Was a huge inspiration for this thing I made…)

And if you want nice glitchy scarves/blankets/etc. there’s GlitchTextile (I wanted to buy a scarf or two but international shipping makes it a bit expensive…) :

Founded in 2012 by Brooklyn based artist and designer, Phillip David Stearns, GlitchTextiles offers a range of Jacquard woven cotton textile goods. From throw blankets, throw pillows and cushions, to scarves, laptop sleeves, and other accessories,...

Omg hi Weston!..and a Pamplemousse video! Man, that made my morning. Thanks for telling/showing me that.

Excellent thread. Much to explore. And very timely, as I’m starting to work on various images and videos to accompany soon-to-be-completed musical endeavors. 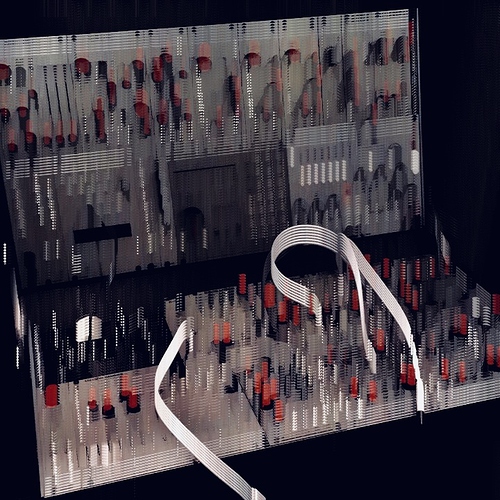 finally got to explore this a bit today. the echo usually works well and cutting/EQ treble can yield interesting results. 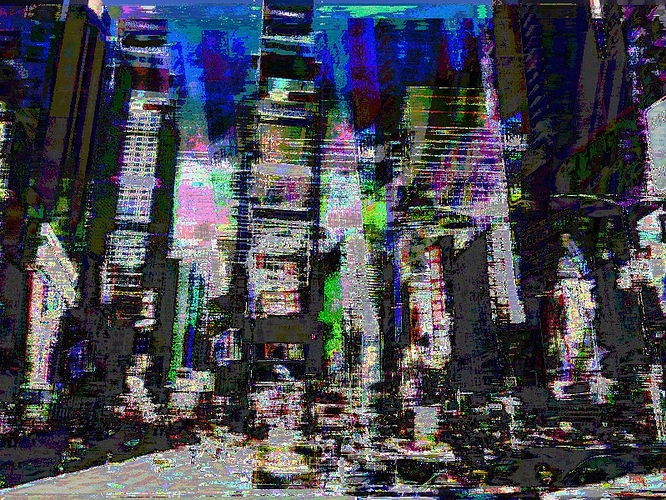 I had some fun when I was working on my masters glitching images with a Hex editor. Results here:

These textiles are a collection of woven and knit wall hangings and blankets whose patterns are generated using images taken with short circuited cameras. These blankets are layered with irony: a d…

If you want to have fun on iOS, Glitché and Decim8 are two fun image-munchers that I like to pit against each other. I’ve had lots of happy accidents/good results with both, and it’s a nice creative way to kill time on the train. 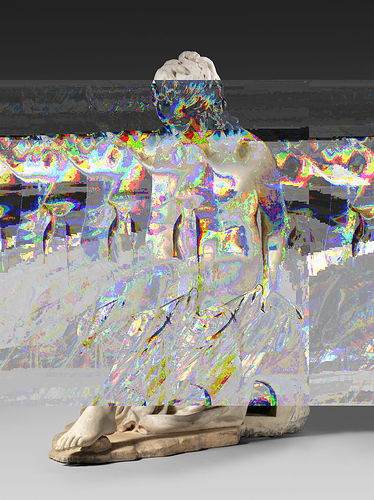 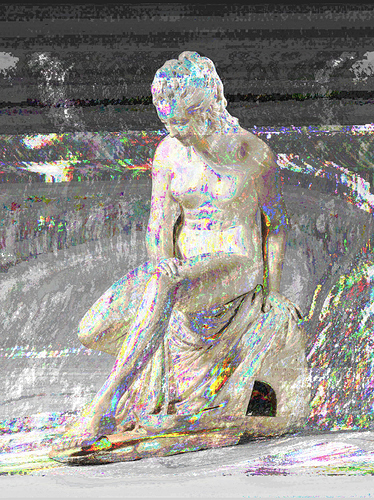 jean-antoine-houdon-bather-reverb2.jpg1122×1500 1.8 MB
This instead is something I’ve done recently with directly sorting image data in code:

How are you saving the images from Audacity? I did as the tutorial linked above describes but got files that won’t open.

Also ace Instagram pics! Are those done in a Hex editor?

Import .tiff then raw data export with A-Law encoding worked well for me, sometimes when manipulating the data if you get too near the headers or if the manipulation is too heavy (e.g.: pitch) the file won’t be readable anymore. Also, you’ll want to rename your output to .tiff just in case.

The instagram pics above are coded in Processing, better hands on control :).

I always thought this Illucia DTR demo of codebending Mario in realtime was pretty great https://vimeo.com/49142543

Thanks for posting that video.
Haven’t watched it in years despite it being one of the things that made me buy a DTR…