I’m not surprised he liked the idea, but yeah, they do require space.

This might very well propel me into learning, sooner or later, how to program and mount a teensy or something. It’s an exciting prospect.

Have you any plans of your own?

With the Teensy it’s not even programming:
https://www.pjrc.com/teensy/td_libs_Audio.html

They have a “virtual modular synth” editor online which then spits out the necessary code:
https://www.pjrc.com/teensy/gui/index.html

The Moffenzeef StarGazer was made (mostly) with that tool and I once created a DIY AE Modular Synth module of that.

For the LD3 one would want audio input too though, but there’s an audio shield for that. I think a Teensy with the audio shield would probably fit inside the LD3, so there would be very little soldering required. That’s what I’d like to look into.

Oh dear, that’s amazing. I’ll confirm the dimensions and look into buying one if it seems viable. Thanks very much for the info!

One additional thing to do on a Teensy project however, is to reduce the LD3’s 0-5V control signal range to 0-3.3V.

A voltage divider would probably be okay for this application. Just a guess though, but that’s what I would try.

How to Level Shift 5V to 3.3V | Random Nerd Tutorials

In this tutorial, I show how you can shift a signal from 5V to 3.3V. This is very useful if you want to connect an Arduino to an ESP8266.

I’ve had a bit of time to investigate the teensy Audio System Design Tool. Among other things it seems a beginner-friendly gateway into synth DIY. Brilliant.

So. The LD3 filterboard has room for one audio input. My first idea for a DIY project would be a phase vocoder for novel spectral processing of the input signal.

Audio In is the modulator/analysis input.
CV1 selects looping preloaded carrier/synthesis samples (because there is no second audio input), like a one-foldered Radio Music
CV2 modulates base frequency or perhaps instead formant shift
CV3 modulates decay
CV4 modulates filter-band count

Just a vague idea for fun, of course.

As it happens I have two Eurorack vocoders already and thus not much motivation to create this other than a fairly strong interest in what it’s like to build a vocoder from scratch. It would be a real pain switching samples on that DIY project, but I mostly use only crispy, squelchy field recordings as carriers anyway. Could just load ten or so and be done with it.

Do you know what the Digi Switches do, @NightMachines?

Do you know what the Digi Switches do, @NightMachines?

The switches are (I assume) for things that can be switched on or off, like the LPF, BPF and HPF modes in some filters.

Regarding your vocoder, that’s a cool idea! Since there are two filter board slots, you could use both for signal and carrier 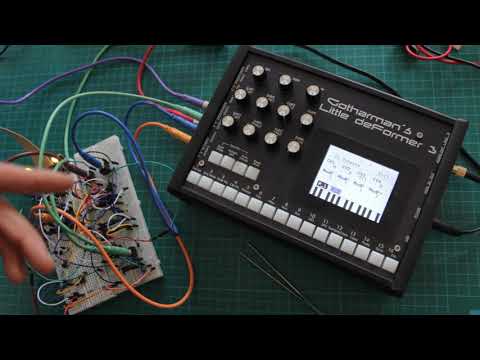 EDIT 2:
Made a little video in which I loop a voice recording and mangle it to bits with the granular tools live: 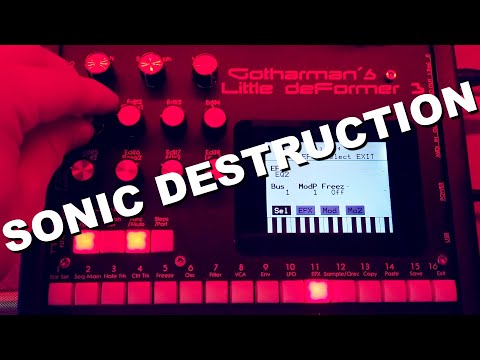 Very nice. I’ll try to keep an eye on that one.

Ace. I’ve not tried recording loops like this yet, only importing samples or processing live inputs. Unsurprisingly, it looks viable for a good time. It inspired me to have a good LF3 jam as well, the first in a while!

I must admit that I haven’t fully looked at all the resources that I found by now (nice playlist, @NightMachines!) and I am still a bit confused about the morph functions. How do you define the values between which a morph is done and how do you define set a and set b?
The manual is a bit vague.

I would like to understand this a bit better, maybe someone can point me where the concept is explained a bit more in detail, if it is in the manual, sorry, but even pointers for that would be cool.

When setting parameter values the user edits set A by default. At any point you can switch to set B and define its corresponding parameters. Whenever there is a difference in the parameter values between A and B (e.g. envelope release time 23 for A and 511 for B), the morph function fades proportionally between the two values.

There are many possibilities and I’d like to give a few examples I like, but I’ve no time now. Maybe later. I’m sure Felix will help too.

The sequence morph works the same way, but is a fully separate fade between two sequence sets. It can turn two simple sequences into one very interesting one!

Thanks a lot! Now I get the manual as well, it is as simple as defining the second set of values by hitting the morph button.

Pressing the Morph button will switch to layer B, which will sound/play when the morph knobs are turned fully clockwise.

What I find important on the LD3 and the SpazeDrum in regards to morphing, is to just focus on layer A for as long as possible when working on a preset. Then, press COPY and then the MORPH button to copy layer A to layer B. Now the morph knobs shouldn’t do anything, because both layers are the same. Then you can morph to layer B and edit it on the basis of layer A.

Gotharman effects are esoteric to say the least, most of them I find are pretty tricky to get anything usable. I use the delay and variations the most.

I’d be interested to see how others use the effects if at all, some example settings would be a big help too?

I have a Polyspaze and used to have a very early LD2, the effects are quite different in the newer boxes. I’m presuming the LD3 effects are the same as in the Polyspaze or thereabouts?

I’m presuming the LD3 effects are the same as in the Polyspaze or thereabouts?

Off the top of my head:

Of course most effects are granular/lofi digital so while there are a lot of them, their output might indeed be somewhat similar, depending on the setups. It helps to modulate them heavily

I’d be interested to see how others use the effects if at all, some example settings would be a big help too?

I had a Pitchshaper eurorack module before acquiring an LD3. My favourite patch was to send two looping outputs from a Befaco Rampage into the inputs and ‘play’ them with the rise/fall sliders at lowish audio rates, as well as modulating the Pitchshaper parameters. This would often result in delicious crackling sounds that could be twisted in various interesting ways.

I’ve tried to recreate the effect with the LD3 by sending the envelopes instead to that – with mixed success. I find it an extremely interesting effect because it sounds at once so digitally synthetic and yet so chaotically ‘organic’.

I’m out of time but have some views on a few of the other effects. I’ll return…

Hello my fellow deformers!
Coming at you with some questions

Love that machine, but haven’t really be able to dig deep into it 'til recently…
It seems that i miss some subtilities, and i did not really found answer to my concerns in the manual.
I’ve transfered on it lot of audio clip from my norns and my modular that i would love to “deform”…
What is the best way, setting wise, to use it? is there a way to use some kind of “trig” mode instead of “gate” mode?
I could chop it, but most of the time i have audible clips, and it takes me lot of hassle to get rid of it…
Other question, i’ve noticed that those long audiophrases are sometimes canceled while playing. I know the 8 voices limit, but my guess is that a stereo sample takes 2 voices. Am i right? If so, i need to convert all my samples

Thanks for your advices regarding to my “problems”…

is there a way to use some kind of “trig” mode instead of “gate” mode?

I don’t understand what you mean by that. Could you elaborate?

If you want to have a long sample playing monophonically without being cut off by other ones, you need to set that samples’ part to a certain voice. Go to the menu → TRIG → and then set the mode from poly to Voice1 for example.

When I trig a sample, I choose the note on note sequencer then the gate lenght on gate sequencer. I don’t really understand the relation between the gate lenght and its actual lenght on the sequence. And most of the time, even if I adjust precisely the gate lenght to fit , let’s say, the 4 bars of my sequence, with the sample trigged on the first step of the first bar, sometime the sample cut, or sometime the sample don’t playback when the sequence loop. This is this “unconsistancy” that i want to get rid of…
So i was asking if there’s a setting wich permits to play the total lenghts of a sample, whatever the gate value of the trig is… (trig mode vs gate mod on various sampler like MPC or MV).

“If you want to have a long sample playing monophonically without being cut off by other ones, you need to set that samples’ part to a certain voice. Go to the menu → TRIG → and then set the mode from poly to Voice1 for example.”
Yeah, i’ve done that already. And used the “Voice1long” setting also… but still…sample playback cancel…
you never noticed a voice stealing difference between stereo and mono samples?

So i was asking if there’s a setting wich permits to play the total lenghts of a sample, whatever the gate value of the trig is…

Hm, okay. Try setting the VCA Drone parameter to maximum and the sample not to loop. I think this might be what you’re looking for.

you never noticed a voice stealing difference between stereo and mono samples?

I’m not sure if I ever tried stereo samples to be honest. I usually use short mono samples, like drum samples. Other than that I sometimes live-loop with the LD3 and there I haven’t had any sample cut offs.

Thanks for your time. wanna try this drone setting!

you never noticed a voice stealing difference between stereo and mono samples?

This is something I’ve been meaning to test a lot more. I’ve had trouble using the internal sequencer to play very long and slow notes (which I think
is to say finding the best interaction of gate length and envelope parameters, depending on what else is going on). Stereo-sampler chords cutting off or failing to trigger at all count among my experiences as well.

This is one of the few areas in which I’ve felt disappointed by the unit. Then again I’ve yet to encounter a non-DAW sequencer that I really felt was up to the job of extended (and/or unfriended) notes and chords. By and large I find LD3’s sequencer incredibly interesting and good fun.