Wanted to open an enthused topic of discussion around the recently released Grainstation-C by Micah Frank (Puremagnetic).

Got it up and running last night (even picked up a second hand launch control to give it a whirl) and I’m super impressed.

Edit: Wasn’t quite sure where to file this…but as to process: it’s an inspirational performative tool; got into a complete flow state with the ‘stock’ sounds (field recordings) over the course of a few hours last night.

I think that I have to bite the bullet, and pick up a new Launch Control today. This has so much of then handonsness that I have been missing, and the functions that are completely out of my budget for building in the rack myself.

I’ve never tried running Csound on Belas or PIs, but I wonder if it could work on any of the smaller units.

I’ve never tried running Csound on Belas or PIs, but I wonder if it could work on any of the smaller units.

need to test, no issues with running Csound on rPI/Bela…
question would be more processing requirements - but I had a quick check of the source code, and it be fairly easy to scale it back to less channels (to reduce requirements)

I might give this a try in eurorack, either running on Salt/Pepper or perhaps the Nebulae?
I quite like the fact is Csound, which Ive done a bit of, but adapting this could be an opportunity to improve my csound skills.

not sure on what id do about the control interface, last thing I need is another controller…so would need to revisit that.

perhaps instead I might just take the ideas, and evolve into something different… more suited to eurorac - for sure this is inspirational

Hey Mark, would love to see you work your magic with it!

I would say I was drawn to working first in detail on one track at a time, then more toward micro edits/touches on individual tracks after ‘fading up’ 3 or 4 tracks, going very rapidly back and forth / doing things at once. The sliders are great for that.

I hear you on the control surface. I’ve been eyeing the LC for a while and this pushed me over the edge. Lots of options with all those knobs/sliders/buttons, and paging, and the ‘default’ Ableton usage is handy too. They seem to run about $100 on the used market.

Also forgot one of the most interesting features, setting state snapshots and ‘morphing’ between states with the eighth slider. Super fun.

question would be more processing requirements

Maybe this would be a good application of the RPi4B’s increased processing power and RAM? Although there’s still the issue of heat dissipation, especially with a HAT like the PiSound for audio output.

I’m new to CSound but this looks very cool. I’m going to try to get CSound up and running on my laptop and am bookmarking this thread to come back to as questions inevitably arise

OK, so: I’m trying to use the Grainstation-C with the AKAI MIDImixl. The AKAI MIDImix has a nearly identical interface to the Launch Control and its template editor can open presets but… it lacks the capacity to open sysex files, which is a key part of the Grainstation-C setup. I’ve been trying to transfer the sysex files to the MIDIMix directly via Sysex Librarian but it’s difficult to tell whether that is having an effect (in any case, I’m not getting any sound out of the system). Does anyone know a possible way to enter the template directly into an editor interface, or any other way that I could save it as a preset (as an incidental note, the the AKAI MIDImix uses what looks like a proprietary filetype for its presets (they are listed as “MIDIMix Editor files”))?

Maybe an annoying manual process but you can load and view the mapping in the Novation editor by clicking ‘show values’, so that you can see where each function is assigned, eg: 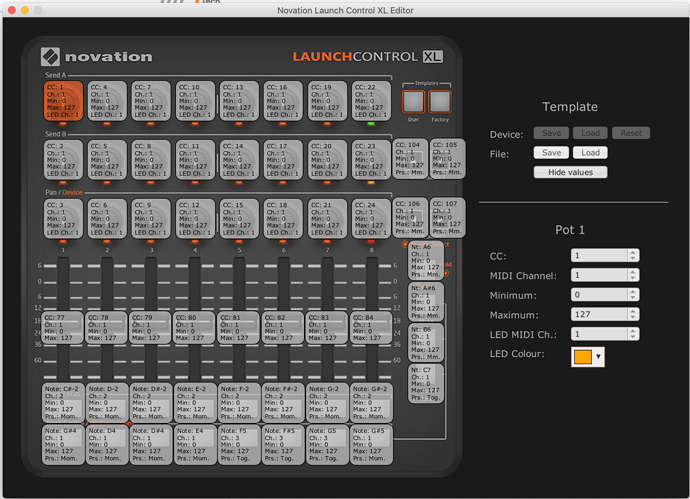 I don’t object to a tedious process

I’ll give this a try and report back, cheers~ 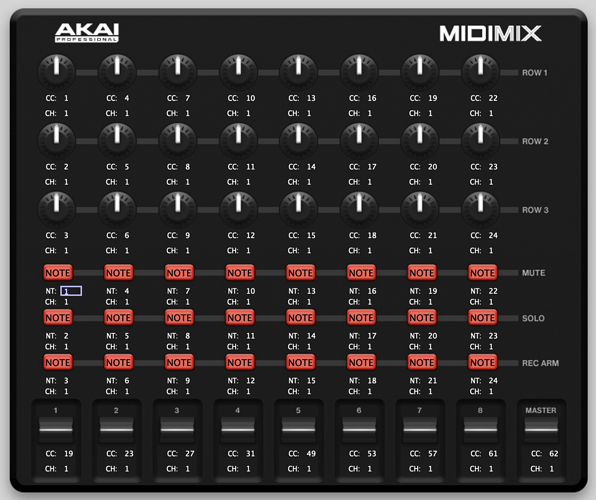