Pretty excited about granular synthesis.
Got a Nebulae v2 in my modular system and having fun with Spacecraft on my iPhone.

It’s the new thing for me and it’s awesome, yes, but at the same time I understand this is not new at all and many of you guys are into that as well.

Please share what you know about it, tracks you made, your processes and interesting links. I am particularly interested in the history of granular synthesis, different and new approaches or even reinterpretations of it.

I was thinking about picking up Microsound by Curtis Roads but I’m not sure…anyone read that?

In the meanwhile I bought an iPad just to play with spacecraft and probably I will download Borderlands too.

If you are interested into all this questions about granular synthesis then it’s definitely worth reading Microsound by Curtis Roads.
Then you can look at Barry Truax, Iannis Xenakis & Horacio Vaggione…

I was thinking about picking up Microsound by Curtis Roads but I’m not sure…anyone read that?

I come back to this all the time, if you’re interested in granular synthesis this is the best place to start!

Microsounds AFAIK seems to be the comprehensive text on granular synthesis. I don’t know how much has changed since it was written.

If you didn’t know already, the granular engine in the Neb uses Partikkel, which is a very intimidating Csound opcode:

partikkel was conceived after reading Curtis Roads’ book “Microsound”, and the goal was to create an opcode that was capable of all time-domain varieties of granular synthesis described in this book.

There’s a few other granular opcodes in Csound, which are in the bottom of the partikkel page listed above. Some of them are still pretty great to work with. For instance, I know the artist BT swears by the granule opcode:

The most efficient implementation I know of is the FOF opcode founnd in Csound:

You can read about the FOF algorithm from the description of the original CHANT program:

The approach above uses a sync table-lookup oscillator, but another approach is to use filters. A friend of mine did just that in FAUST, and his implementation is now part of the standard FAUST library:

He wrote a paper on his FOF implementation as well: https://ccrma.stanford.edu/~mjolsen/pdfs/smc2016_MOlsenFOF.pdf

SC has a FOF implementation too apparently.

In the 90s I used to use a hardware sampler+ midi to shuffle through “grains” of a sample. Set velocity to control sample start point, not volume, and then sequence many short notes with velocity shifting from 127 to 1 over minutes… Adjust envelopes on each note… It was weird to realise after the fact I’d basically come up with the roughest form of granular synthesis without knowing about it.

Then Audiomulch showed up with its awesomely accessible granular contraptions, followed by a free VST knock off of the delay-line granulator… Felt like a lag of maybe a decade before this tech showed up in mainstream DAWs but I may be entirely wrong.

Thank you for all those leads, I’d never even heard of FOF before! (I saw it in Soundpipe but never stopped to explore it or find out what it meant)

I was just looking to see if microsound has anything in it about FOF (it doesn’t) and in the process noticed a mention of Clarence Barlow’s “spectastics” (spectral stochastics) technique which I don’t remember noticing before. I found this paper he wrote on Intra-Samplar Interpolating Sinusoids which describes some of it and related techniques (just skimmed through but I’d like to sit down with this again and try some of it out…) and suggests that his composition Farting Quietly in Church makes use of the technique but of course I can’t find any recordings or suggestions of recordings…

Granular synthesis is such a wide topic which gets more exciting when you approach it compositionally moreso than as a set of techniques – it’s an approach to thinking about and working with sound, really.

Some unrelated Barlow that opens with some granular processing:

Speaking of Curtis Roads, one of my favorite recipes he describes in microsound is “pulsar synthesis”. I think it’s a good example of something that shines when approached compositionally, the basic idea is pretty simple but there are so many permutations and approaches to working with a mixture of two modulated waveforms which are pulsewidth-modulated and deployed as a pulse train which can be masked and otherwise transformed through erasure etc…

He wrote a program called pulsar generator which you can still download from his website but only runs on macos9: https://www.curtisroads.net/software 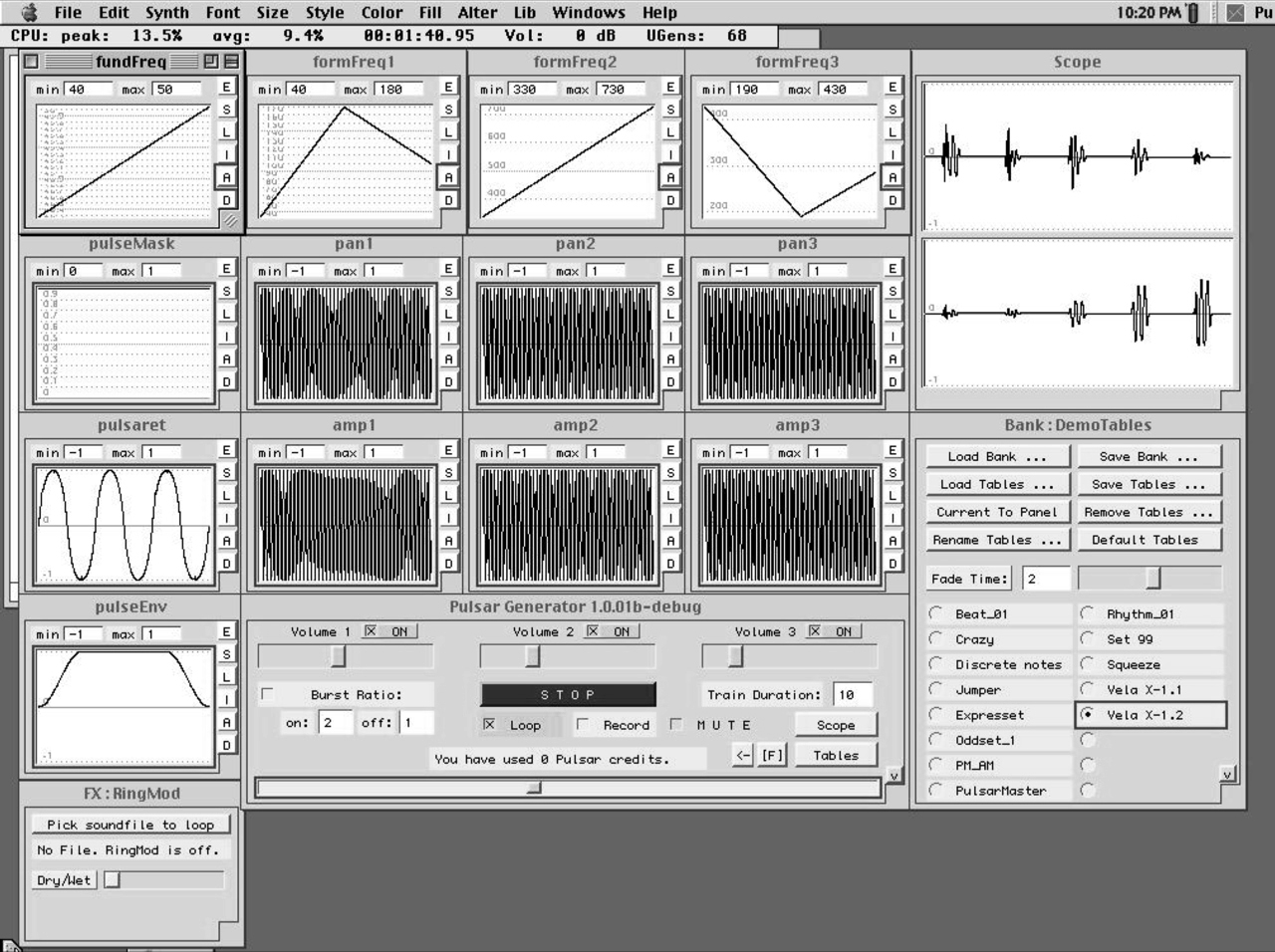 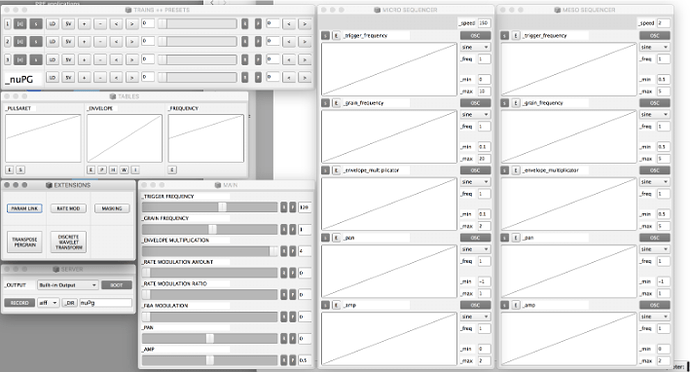 This is a drone piece synthesized with pulsar synthesis using an implementation in python:

Another one with the same system – all the synthesis is variations on the basic pulsar approach:

But the thing I love about the technique is that it’s really simple enough it can be implemented anywhere, you don’t need special tools IMHO. I haven’t seen it done yet but I would think it’s also well-suited to a fully analog implementation…

maybe the first ever explicit implementation was Xenakis’ Analogique B, using quite primitive equipment (the run of the mill sine and noise generator, bandpass filters, and magnetic tape splicing). though this might be less ‘pulsar’-based and more ‘granular’ …

and a million sincere thank-yous for sharing the recent recording…

I was contemplating buying a G3 but I couldn’t justify why. This now may answer my question. I love tinkering with stuff like that.

Unfiltered Audio’s excellent Lion synthesizer has two granular synthesis modes, both of which have been mentioned in this thread: pulsar synthesis & vosim (speech) synthesis. In addition, it has real-time granulation of all of its synthesis modes. (There are many interesting synthesis methods in Lion! It’s a great instrument.)

Thanks for all the great info re. pulsar synthesis. Perhaps a naive question, but…is nuPg publicly available?

Such amazing information in this thread after only 12 posts!

Some granular synthesis tools that I can also recommend for iOS:

I know very little about the theory of granular synthesis (though I may have to pick up Microsounds based on this thread!) but it’s a technique I’ve been exploring since the very beginnings of my musical journey. I only got into electronic music about 3 years ago, and at the start most of my work was done on an iPad. Borderlands granular was a huge tool for me, and Samplr also has a pretty cool granular mode that I utilized a lot as well.

Eventually I caught wind of Clouds and that lead my down the Eurorack rabbit hole, as it tends to do for many people :). Currently I have a monsoon, Nebulae and DLD (which can do granular type stuff if you push it) in my eurorack case and granular synthesis is at least somewhere in essentially every one of my patches.

If you are interested in hearing a novice’s exploration of the technique, here’s a soundcloud link to some of my very earliest recordings, all made solely with my iPad. I think either Borderlands or Samplr shows up in basically every one of these tracks.

Wait ! Is there a VST of Audiomulch Granulator delay ?

Looks like it’s no longer available, but it was called KTGranulator after DLGranulator

Ah yes ! I think I contacted the creator a few years ago and he sent me a version that worked on recent os

short answer is no—still in beta. but I think Marcin is happy to share it if you contact them direct.

Does anyone know of a granular device that would let me live perform the probability of different playback speeds of grains? I’d like to crossfade chords of grains by slowly altering the likelyhood of a grain having a set pitch.