So I’ve just assembled my kit; cleaned up all the solder bridging so all LEDs and buttons work; but I’ve done something wrong, a column of 4 LEDs is dimmer than the rest. Any idea where my mistake might be? Thanks! 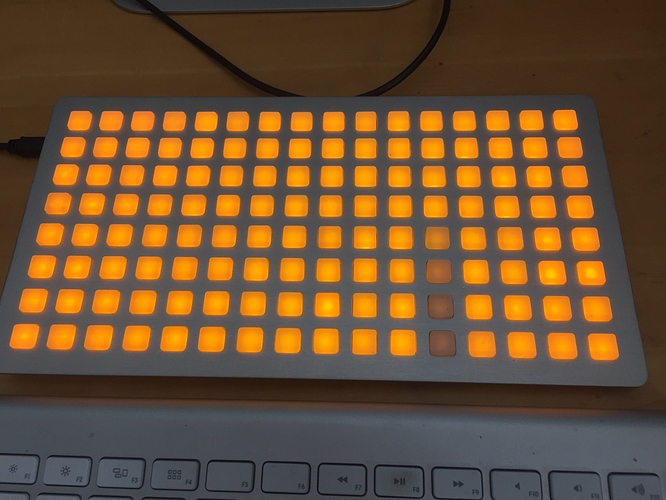 looks to me like you might want to investigate the tlc5940 chips on the back of the board, one of the legs might need to be soldered a little bit… this is potentially hard because its surface mount. you can always email info@monome.org if needed!

Are you hundred percent sure there are no bridges? even a hair thin one might cause trouble. if you have thin tip for SMD go leg by leg on the 5940, if you see like some leg could use a tiny bit more of solder add it. I doubt that anyway, i think you might still have some solder bridge around there…

agreed, check the LEDs again around the problem area.

I had a similar problem with one of my squares when I built it last week; the button itself was functioning in sum, and the LED would light up when a pattern was going through it, but not when pressed. I ended up swapping out the diode associated with that button, and voila!

Sorry for the delay; real life getting in the way!

Thank you all for your help, and Brian for your email - especially while you’re travelling. Turns out that it was those LEDs - replacing them fixed the problem. I’d obviously done something that had damaged them (soldering while the monome was plugged in, probably).

Lots of tidying up solder bridges and now I have a fully functioning monome. Extra flux is a wonderful and useful thing. Thanks everyone.

hijacking for a quick question. building my kit and did as instructed and tested after first LED. it lights up as expected but I tested again after I finished the first column. only the first 4 light up. is that normal?

You can see the pattern at 1:06 in this video

thank you. tested and all working correctly. Had a panic for a moment there lol