I have a 128 Varibright Walnut grid (orange LED). Not sure the exact year. I am using it with Ansible and WW threw a Switch. The issue I am having is that if I play in the dark its great but if I have regular lights on in the room it is extremely hard to see the lower lit keys. I don’t have another grid to compare it to see if the light values are normal or if mine is having issues. Has anyone had this issue? Is there a way to bump up the brightness? Do I just need a newer one

Thanks for any input!

I’d be interested in that because I played a show outside a few months ago and it was near unusable (had to play the whole thing in monobright and I still couldn’t see much of the lights even then).

Yeah, clear weather is basically non-flying weather for a grid

I’ve tried a few different leds with mine but the sun is just too bright to surpass it. I wonder if there’s a sensible way to solve this issue with fair current consumption, but so far I’m okay with just playing in the dark

Yeah this was great on the Grayscale model. You can se it in full sunlight. But then again monobrightness.
Even though it is not so minimal and sexy with another hole in the unit I do find it extremely usefull on say the Push. Where everything works fine bus powered but it bumps up the brightness if you plug in an external power adapter.

Green or red leds might also have greater visibility (I believe they’re used for traffic lights for that particular reason), but aesthetically they’re not as good as yellow/orange

Should we make the “Monome Umbrella” a thing?

I love the Umbrella idea. Tehn get on that :). I accepted that using this in the sun is a no go. I am just having issues even seeing mine in the studio with regular lighting. I can’t remember if it was brighter in the past. to leds get dimmer before they die? Also my solution to outdoor performance haha 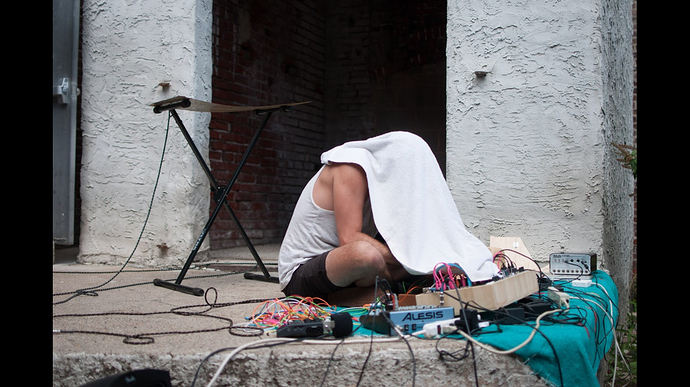 I remember my own solution in the sun, I positionned my laptop’s screen opposite to the sun and disable the keyboard, then put the monome on the keyboard protected by the shadow of the screen. Your towel technique can actually be interpreted as “stage show”!

has anyone tried using the current aluminum grid or arc (warm white LEDs) in direct sunlight? how usable are they? is providing some sort of shade–trees, tent, body, canopy, etc–enough to see the leds during the middle of the day?

Having just experienced this issue this past weekend, I can echo the people above and say that I could not see variable brightness leds well in direct sunlight. I could sort of see the full on leds, but not well. I’m not surprised. I asked someone to stand in the way of the sun to cast a shadow over the grid/arc and I could see great.

Yeah it’s been a frequent issue, I usually end up switching my monome apps to monibright but even then it’s not very usable without something to hide it from the light. I’ve got a wooden 2012 monome though so I can’t speak for the aluminum grids which if I remember well have brighter lights. It’s something I didn’t consider when buying mine but if the difference is noticeable enough in daylight, I’d seriously consider switching for the aluminum one even though I find mine prettier.

i just checked it myself against the afternoon sun. picture is below.

while the camera’s shutter speed is out of phase with the leds’ strobing, in person, the only visible leds are the parts of the grid and arc that are in shadow.

the rest of the full-bright warm white leds in ansible meadowphysics aren’t at all visible, to say nothing of the dim leds that indicate row mutes. same goes for the arc running levels. the er301 screen is also illegible, though any shadow on it makes it useful again.

about the only lights on the skiff that can be seen at all in direct sunlight are the status leds from modules and isms, though some of those are a bit faint. (parts of mixology and clouds’ freeze.) 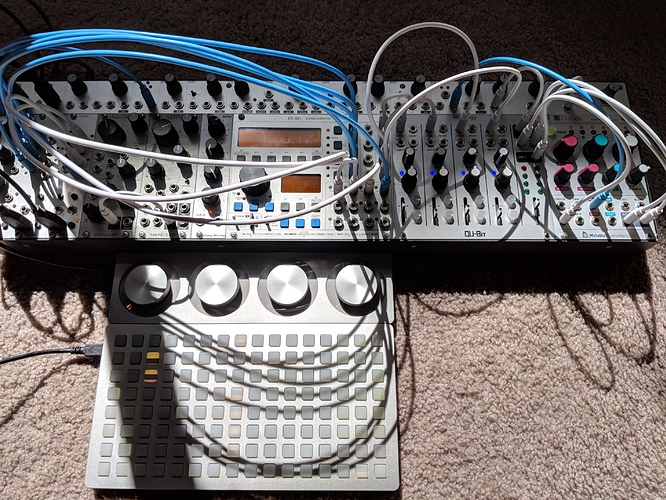 It somehow still looks a LITTLE bit more usable than mine where it’s really a 0% visibility thing under direct sunlight, but it’s also possible the last time I used it outside sunlight was even brighter than on your picture (it was in the afternoon in south of France under a bright sun, so yeah… not the best scenario ^^) anyway, it’s all about finding a way to create some shadow at that point ! But I’ll still consider switching to the aluminium one if I can at some point.

Edit : Also, thank you for pointing out the “modular visibility” issue, which didn’t occur to me at all, it’s an interesting thing to know it can be a problem to consider with modular gear as well !