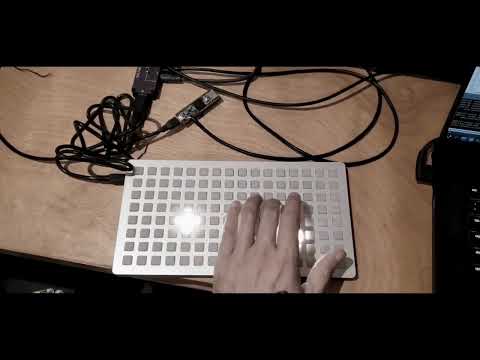 grids is a c++ library geared towards idiomatic programming, rapid UI prototyping, and simple integer physics. It is designed for use in small, embedded systems like the teensy hardware platform. I began this project to have something I could use to prototype monome grid based interfaces for one-off hardware experiments as well as to possibly make it easier for non-programmers to experiment as well. Some heuristics/intentions I had in development were:

Some future goals for the project are:

Would love some feedback if anyone happens to use this.

The smallest objects in grids are a Point and a Vector

A point must be somewhere on a monome 256 grid or smaller. A point is a bitfield…

What this means is that the values automatically wrap around 16.

These two types can interact as you might expect:

These elements are the start of a small set of of integer physics tools I imagine might be useful with the notion of a grid. No modulo or value checking is necessay so code can be more succinct.

There are two more main types that make up the library:

The syntax for these is a little clunky at the moment, but there is not a lot to know…

rightHalf describes a grid with an offset of x=0, y=0 and a size of width=8, height=8

The offset is a Point, and the size is a Vector.

app describes a 128 x 1 function lookup table that watches the serial bus for messages from a monome grid and sends out messages to a monome grid.

The second argument in the <> is a “depth” of sorts. Having multiple layers provides support for “popup” windows or “sub-menus” depending on how you conceive of it.

Notice that <64, 5> would create an array of [64 * 5], so every layer, whether used or not, is created during compilation of your code. The memory footprint of this is rather insignificant. A grids instance for a 256 grid with 100 layers is something like 100 kB…

Continuing from the above code…

…again, the syntax hopefully can get cleaned up a bit to ditch the ampersand somehow, but hopefully the mnemonic of “add” and “and” can get you through.

This function takes a “reference” to a Grid object, a layer number, and the name of a function that will run when a key press maps to a coordinate within the virtual grid.

The function must already be prototyped, but you can implement what happens later, as is common practice in .ino files.

Here v is the state of the key (true=pressed), x and y are the global coordinates of the key, not the coordinates local to some grid.

Luckily our grid object has data that can help…

Sending messages to a monome grid

One function, many ways to call. The user is expected to implement the serialosc protocol on their own, with a few conveniences built in like macros for the hexcodes and a few extra data types with helper functions…

One thing to remember is that the brace enclosed list of bytes goes first, and can go on forever, with one of either two array types optionally at the end depending on which type of message you are sending.

Where rightHalf is the name of some Grid variable, like we used above.

So, wrapping up, here is a complete program that creates momentary switches over an entire monome 128 grid

I just wanted to update that it compiles for teensy 4.0 and 4.1. I also recorded a short clip of the demo sketch from the github.