Harmonic Wheel (and synesthesia on a side note)

Has anyone heard of the harmonic wheel? I wanted to paint a circle of fifths as a “cheat sheet” of sorts, to put on my piano, but then I stumbled upon a fascinating image. This one:

I’m a sucker for charts and symbols especially when it comes to music so I investigated further. Turns out it is a variation on the concept of the circle of fifths, only it contains a massive amount of information and it is intended to be used as a tool for composition. Apparently, this is the invention of a Spanish tutor and he has sold copies of the wheel on Amazon for a while, but they are out of print. Or so I believe. I wrote the guy asking if he had any for sale but didn’t get an answer. So I just went ahead and made my own // 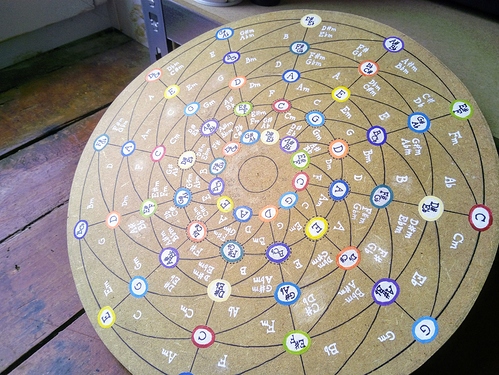 IMG_20200618_1351544160×3120 3.31 MB
I’m still figuring out how to use it, but it’s such a useful tool. Over the past years I have been scribbling notes and charts and overviews of music theory in little notebooks, scraps of paper, digital notebooks, folders on my pc and so forth, but it looks like all I will ever want to know about music is hidden in patterns on the harmonic wheel

Structurally, it is nothing more than five nesting circles of fifths, with an offset of 90° clockwise from the outside to the inside. The resulting positions gives information about scales, chords, chord functions and all the usual, essential stuff I keep forgetting. You need to remember the patterns but as a visual artist myself, my brain is wired to respond to shapes and colors.

This is the shape of a major scale. Just one position to the left and two positions to the right, and one circle outward contains all the notes you need.

But it also gives you the notes of all the triads and fourth chords in that scale. 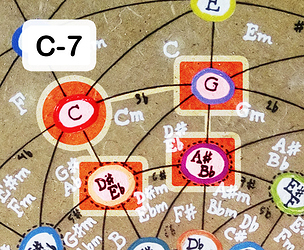 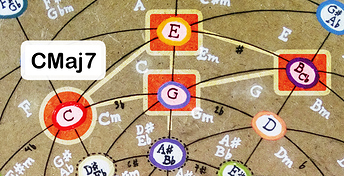 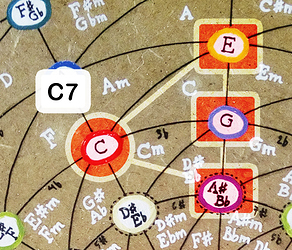 And of course, you can apply these shapes to any note by just rotating the wheel. What I find most gratifying is the way you can easlily see the relation between chords that have overlapping notes. Jumping from a G-7 to a EbMaj for example is just changing one note, but that’s not something I come up with on an ordinary day. On this wheel it very easy to make these jumps and see interesting movements and progressions.

It was also a lot of fun drawing this thing but there was one challenge that I spent quite a bit of time on: deciding what colors to use for the notes. This is not at all part of the harmonic wheel, but it was part of my original idea to make the cheat sheet. In order to facilitate learning (both for myself and my four year old son) I’m interested in the concept of synesthesia. My synesthetic experience is not well developed, but I believe it is something we can train, especially starting on an early age. Colors and musical notes are just vibrations and frequencies after all, so it’s easy to see how they can correlate. But since I’m not particular opinionated about the topic, I just had to do some research. Turns out people have been assigning colors to notes (and vice versa) for a long time.

Scriabin is very well known for this, but he was also a little bit of an odd one out, assigning colors based on the positions of the notes in the circle of fifths, rather than ascending or descending pitch. After pondering about the subject for a bit I decided to take my cues from a completely other field of study, namely that of the chakra system. The rationale being that these have been assigned colors for a very long time, on top of their correlation with musical notes. In the basic chakra system there are seven energy centers so it all maps out perfectly to a diatonic scale. I even read one particular book that mapped these notes very specifically to the energy centers of the body in both the diatonic scale and the chromatic 12 twelve note scale. Anyway, that’s just a side note. 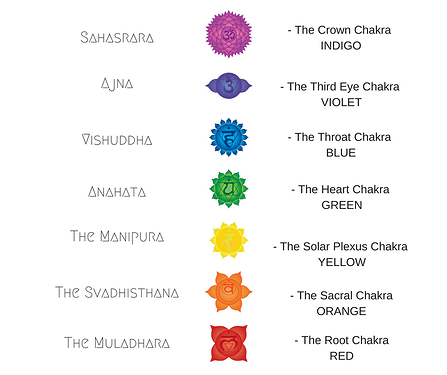 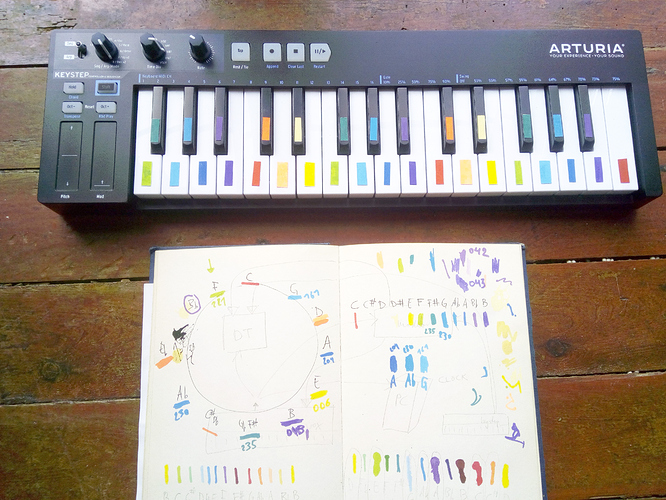 What do you all think? Are you using a tool like this one, do you have synesthetic experiences? Do the color match your own set? Are there any other diagrams that I want to know about?

By the way
the website of the guy who invented the wheel is down (it went offline just as I started my investigations). There is a spanish version but it doesn’t have all the explanations like it did on the English site. And on YouTube there is a series dedicated to the wheel (also in Spanish). I watched it and it is very instructive, but also very dry indeed.

As a general thought, I consider the circle of fifths to be the fundamental mechanism by which I understand harmonic relations (alongside the harmonic series). In particular, the traditional Western 5 and 7 note scales are notes in contiguous arcs from that circle (the note in the arc you consider the root decides which mode). As the interval extends further anticlockwise from the root you get darker scales (ending in the locrian), as it extends clockwise your get brighter scales (ending in the Lydian). Similarly when constructing chords you can add notes to the root clockwise to make brighter chords (stack of fifths) and anticlockwise to make darker chords stack of fourths).

I’ve seen lots of “cheat sheets” with concentric circles, or circles with sliding “windows” to create chords and scales. Another interesting one is the spiral of fifths (like what you are looking at I believe). For me, one of the most compelling aspects of this approach is that a lot of the logic doesn’t only apply to 12-EDO scales, but more generally to any N-EDO. You can construct an equivalent music theory in a many such scales (if the 3rd harmonic lies at an interval not coprime with the tone count the circle may be considered incomplete).

Ah yeah, I know the drawing but I never considered myself smart enough to try and understand it

But it’s probably not that scary. Looks good too, thanks for sharing.

Anything more you can share about it? I don’t know Dick Grove and can’t seem to find the diagram.

Nit: The colors in that chakra chart are misnamed: indigo and violet are swapped!

But on the whole: There really isn’t any rational physical correspondence between pitch classes (C, D, E, etc…) and colors… nothing really “works”: colors don’t have octaves, harmonics and intervals don’t work in light as they do in sound, C is totally arbitrary as a starting point, but red is true bound in how we see. Further, the division into 7 notes derives from the diatonic scale, 12 from desire to modulate, and both have a basis in how the ear hears simultaneous tones. On the other hand, the division of the color spectrum into 7 colors is a culturally learned division - other cultures have different divisions, and it leads to how those people not only name colors, but also how they perceive them.

In short: Sure, assign colors to pitches as form of mnemonic, but there really isn’t any universal justification for one system over another.

I don’t think I have made claims about a universally “true” correlation between the two perceptions, except that some people do experience it as such, and I believe it can be developed and used for example as a mnemonic tool as you say, or as a way to see structures, make compositions, etc. It is this experience that really interests me, not if the experience is “right” or justified. Also, arbitrary choices can take a life of their own as it is adopted by groups of people and cultures, to an extend that the arbitrary nature of the origin ceases to be of significance.

sorry to necro this. the topic popped up, and i had just had a lovely romp through glenn gould’s scriabin recordings. this is probably old hat to some folks, but it’s neat:

as referenced in OP, scriabin and a lot of his peers had strong theory of color symbolism and sometimes had really strong visceral associations with particular keys. (scriabin went so fas as to construct a “Clavier a Lumieres”!)

i’m convinced synthaesthesia is a real thing and have known and worked with a number of musicians who at least claim to experience it very strongly (and i’ve no reason to doubt them.)

but i don’t know that anyone since, like, Goethe would claim that these systems of correspondence have any empirical basis and are anything but individualistic. (e.g. scriabin and rimsky-korsakov had different personal systems.)

here’s a fun paper about it in a fun journal, pretty easy to get

Synaesthesia is an exciting topic of a lot of ongoing research. It can invoke the crossing of lots of different modalities (personality, colour, taste, sound, touch, numbers, graphemes etc etc). Many aspects of it are personal to individuals, but there are some universal tendencies. Recently we’ve been uncovering universal patterns of association even among people who don’t have synaesthesia. For example, if you ask a bunch of people what colour the “eeee” vowel sound is, most (but not all) will say yellow, even if they don’t have synaesthesia. Similarly, we’ve shown that this vowel tends to be associated with sweet tastes, and sharp objects by typical participants in our studies.

Here’s a recent large scale study of vowels I was involved in where we uncover universal patterns of sound/colour correspondences: https://link.springer.com/article/10.3758/s13428-019-01203-7

And a cool web app my collaborator made to let you explore these correspondences we discovered: Vowels in colour oh i really love this paper! how cool. i wonder if there has been any looking into neurological connections - the acoustic features corresponding to these parts of speech being associated with activity in specific auditory brainstem regions… (link)

personally i have very little synasthesiastic (?) tendencies but i do love working with/in big color/light pieces and this gives a lot of food for thought

My colleague David Brang has done some work on synesthesia in the brain, but not yet (I think) connected to speech perception. I’ll add it to the todo list at our next research meeting!

@SimonKirby thanks for sharing your paper!

synthaesthesia is a real thing

certainly real enough to make you wish it wasn’t sometimes

the senses of sight and hearing are effectively inseparable to me—if i hear something, musical or otherwise, i see it too

That’s a really great thing, @OHNE thanks for sharing!

I have been researching this topic past few years while working on turntable color sequencer project. My main impression is that everything in color to sound correspondence is standing in between rational and irrational spheres. Either you go with science or follow personal mystic inspiration. Unfortunately with the rise of moving images, TV and film the topic was forgotten for some decades and now has its revival with more focus on synesthesia and multisensory experiences.

On the photo is notation to Solaris movie, by Edward Artemyev 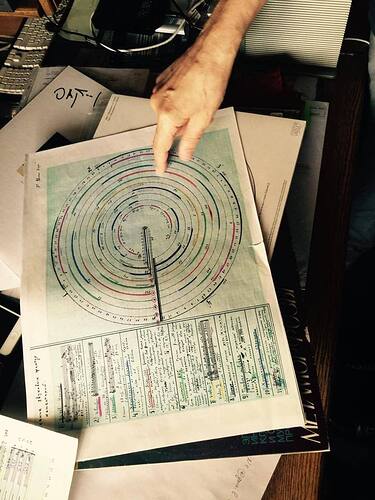 this seems to be the page for the tutor. There are other tools and guides on music theory and how these tools apply