I’m trying to perform electronic music without being hunched over a table and finger tweaking. Author & Punisher comes up as a great example of controllers I’d like to find or build, but I’d love to see anything like a “how-to” for this approach.

I don’t expect to build anything as complex as his instruments, but for all the build-your-own MIDI controller tutorials online, I have yet to see anything more substantial than arcade buttons used.

I’m inspired by the way drum pads or hand pans are like elevated finger pads, and how Sunhouse’s sensory percussion has taken it so much further.

I’d like to find someplace to source things like big levers and steering wheels to use as proxy to finger-faders and knobs, and moreoever, guides for wiring them up as interfaces for a DAW.

This Youtube channel has also been invaluable for various small sensors → Arudino → MIDI, but still doesn’t show a full implementation (yet) of anything big.

[edit:] Kypski’s method of using a turntable setup as a cv controller is ingenious, and approaching the scale I’m going for.

Ideally I’d like to mod gear I have (Akai LPD8) to be bigger, more performative and more cumbersome, but I understand if it’s not a useful starting point.

(I understand the appeal for gear to be compact and portable, but I’m frustrated by how dominant that design value is.)

I hope this is an appropriate place for this discussion. Thanks for any guidance!

Happy to see someone else thinking about this as well! I’ve had a dream of making something like this, but have no idea where to start. One thing I was bouncing around would be to use “small sensors” attached to something big. For example, you could attach a distance sensor (measuring distance from the floor) to any gym machine that moves weights up/down (something like this) Of course, that doesn’t lend itself very well to live (or even home) use, but could work as an installation.

Levers seem quite interesting as well, no idea how one would start implementing that or where to source big levers to begin with.

Conceptually I feel that there would be much to gain in increasing friction when controlling MIDI. If we think about acoustic instruments like the double bass, the taiko drum, big horns, etc. - making a lot of noise requires a lot of energy. Whereas with a traditional MIDI controller I can turn a simple sound to a distorted hellscape with the flick of a wrist. Which is practical, sure, but I think it would be pretty cool to just physically experience how it would feel if creating walls of sound required some effort…!

Those are some cool examples in the OP! I‘d suggest also looking at the Axloloti platform. It‘s very easy to set up without having to write code (you can to that too though), thanks to its Nord Modular-like visual patching interface and it not just does DIN + USB MIDI in and out, but also stereo audio in and out. It also has a microSD card slot, which you can use to hold samples for example, or just other configurations. The Axoloti’s PCB also has lots of analog input and output pins, to attach sensors and stuff easily.

Yes!! I’m realizing that I think this is the crux. Any knobs or faders I’ve encountered have felt too delicate to simply put a bigger cap on. It would be cool if tactile controls had adjustable friction settings, like an exercise bike’s wheel.

with a traditional MIDI controller I can turn a simple sound to a distorted hellscape with the flick of a wrist.

Yes, I love the principle of instrument design and performance that a musical event should be proportional to the gesture. (I forget who I’m taking this is from, maybe Meng Qi)

Cool idea. I think that’s ultimately your best path right there, the trick is finding sensors that do what you want.

Force load cells can be placed between two objects to tell if you are pushing (compression load cell) or pulling (tension load cell). That could be a method of interpreting velocity or a CC amount. The Arduino is there to scale the incoming voltage at the analog inputs to a MIDI value that you want.

MEMs style accelerometers are getting incredibly cheap. They can be used to detect strikes/inputs, but they also can output orientation, too… But don’t overlook using MIDI drum triggers in unconventional applications too.

For a “big lever” application, if you can get a potentiometer connected between the rotating bits you can just supply, say, 5V to the pot and then have that resulting voltage go to the Arduino.

At work we’ve had good luck using industrial linear potentiometers like this. It’s expensive, but you’re not looking for a production solution. There could be cheaper versions, this was just an early google result. But ultimately you could get a durable pot that goes back and forth to translate linear motion to voltage to MIDI. (Same principle as above, supply 5-10V and the scale the input at the Aduino.

This is very hand-wavy and easy to say without sitting down and doing it, but if you can cram a transducer that translations some physical motion to a voltage and get that voltage to the Arduino, you could make some really cool things happen.

And if you end up with anything less than this, I will be disappointed.

I love the principle of instrument design and performance that a musical event should be proportional to the gesture. (I forget who I’m taking this is from, maybe Meng Qi)

Yep! Definitely something like this, but taken to the extreme where the scale isn’t just from “very small” to “small”.

@hermbot, thanks for the insights! Just knowing the terms brings the idea a bit closer to reality. I’ve actually once used these scale load cells successfully in an Arduino + Max/MSP project, so I think just finding the right sensors - with a sufficient amount of resistance - would probably do wonders. A 40kg pulling sensor is definitely in a different ballpark than the 2kg weight sensor I used.

But I would imagine that the same principles apply…

Indeed—I wonder if there’s an easy way to filter for “heavy” sensors like this on mouser or something. I don’t know much about electronics hardware (yet), but I took my Akai LPD8 apart last night to see if the pots could easily be swapped for something with the same electronic compatibility but more (physical) resistance.

I had a friend who produced techno using such a setup. The nice thing is big chunky mid 00s flight sticks are easy enough to find, and have a lot of IO (buttons, levers, joysticks etc). I’ve found a few a local thrift shops. I think you’d maybe want to look at slightly later models with a USB output and not serial (although format converters are not difficult to find) 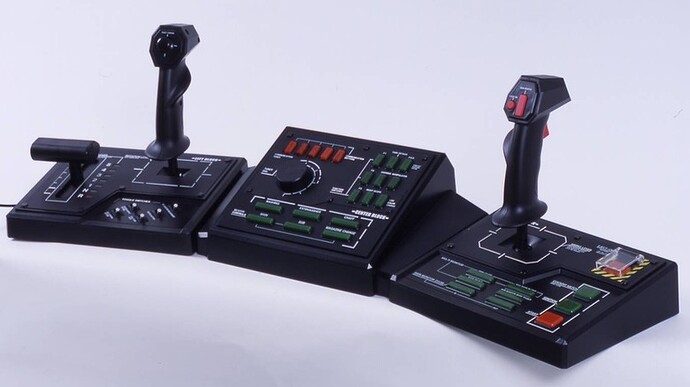 i’ve been thinking about this too, thanks for the useful resources you linked.

the other big advantage of large controls is accuracy - a thread somewhere here has @tehn explaining that the monome arc’s level accuracy is only worth it for larger dials - ie you can’t turn a 15mm pot finely enough to take advantage of 1024ppr. same applies to faders

but what i always wanted was a fader like 30cm+ in length, maybe with haptic feedback / a motor as well. the A&P ones using industrial linear bearings were a good source of inspiration on that, i wonder how he senses position? there must be hi-res linear position sensors for industry but i’m not quite sure what to search for…?

MIDIbox ecosystem is the way to go, IMO. It was kind of scretive and inaccessible for the first decade or so but it has gotten a lot easier with PCBs available for a lot of the most common modules, and somewhat better documentation.

I built a Seq v4 last year (bought PCBs, had the front panel milled from a standard design, sourced all the parts, designed a custom output panel and built the case from scratch myself) and an old friend of mine built a MIDIbox SID completely from scratch on perfboard. It’s all completely open source and insanely adaptable.

If you just want to use buttons, pots/faders and LEDs (and don’t need to worry about things like pressure and velocity, which are doable but I’m not sure this would be the best project for them) then there’s already a project for you: MIDIO128 V3

Not counting the actual controls and enclosure (which would be your design, your choice) it should cost about $150.

This is a good example of the kind of custom controller you can build on MIDIbox: 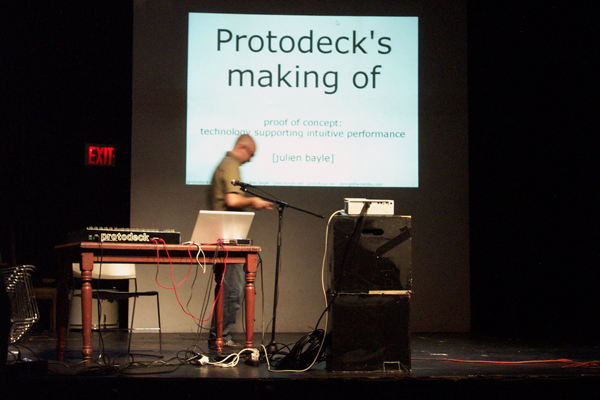 While they are in the same scale as joysticks and arcade buttons, trackballs would be an interesting option for a midi controller. If I remember correctly from my days as a spastic 80’s arcade rat, trackballs can take a pretty good beating. I just ordered a used Logitech controller and I’ll try the tutorial! Feels like a good way to get my feet wet—If I can get the hang of mapping HID controllers, that’ll unlock a whole world. Also a good excuse to relearn Pure Data (previously I was editing patches for my Organelle.) Thanks!

I just came across this YouTube video featuring a bunch of cranky instrument designs and remembered the Heavy MIDI thread.

I liked this one; the idea of something driven by a wheel, like a hurdy-gurdy, but with a treadle instead of a handle. Reminds me of my mum’s old Singer sewing machine. 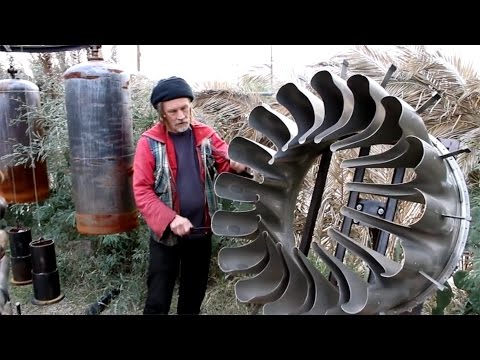 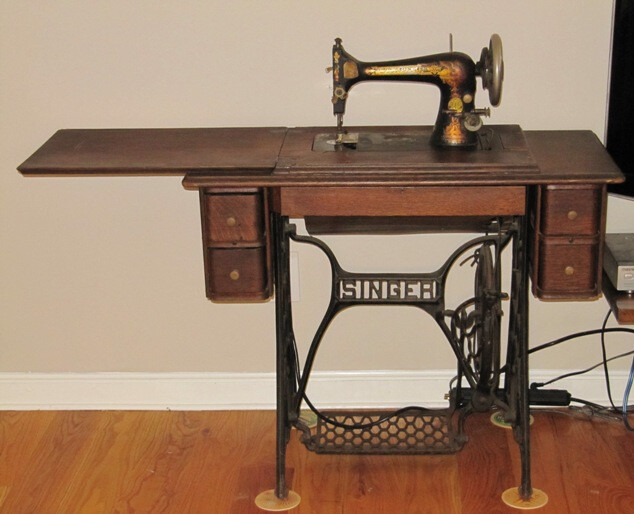 I remember the keyboard player from Lau playing what looked like some crazy, large DIY MIDI controller which was operated by pulling strings, or ropes - it was quite expansive. I don’t remember seeing or reading anything about it though. I don’t think it was this, but it’s typical of his rigs. 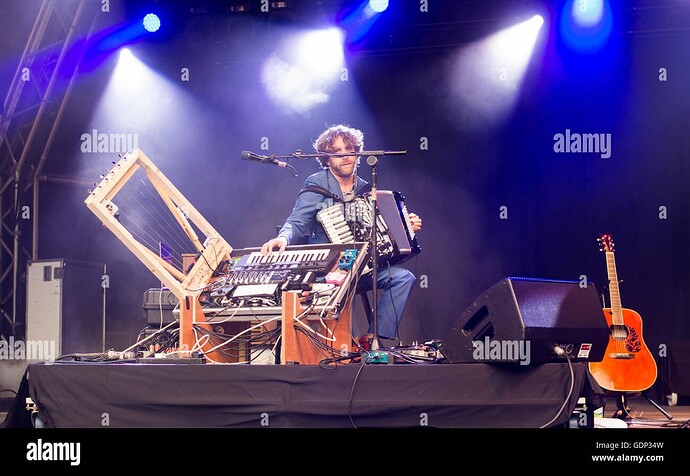