I recently bought some 2N3819 J-FETs on eBay (I know, I know! Still, I needed some and they were so cheap…

But I was willing to take the chance.)
I’ve come across others that were obvious fakes (NPNs remarked) that were easy to test and prove as fakes with data but these are sneaky. On an MTester, they come up as J-FET but with really bad specs: I= 0.2 mA and Vgs = 142mV while a known good and new Central Semi has I=2.2mA and Vgs= 1.56V.
When tested in a simple self biased buffer circuit like this: 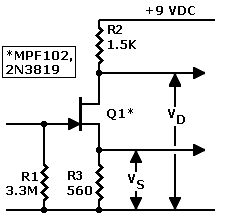 The Vd is around 8.5V (on a fresh 9.4v battery). I can get that close to half of the supply voltage by subbing a very small resistance for the drain resistor (like 82 ohm) but the Vs (same as Vgs?) doesn’t change from a very low 0.15v. These specs are very consistent across many samples of these suspect parts.
Can anyone give me a second opinion? I think they may be real FETs but remarked or possibly out of spec factory rejects. Any help would be appreciated.