Long story short the wifi bud that came with the new black Norns was defective and instead of having @dan_derks send me a new one, I opted to get a new tp-link bud as I liked the short design. Well, I ordered the AC600 from Amazon which looks identical to the tp-link bud that came with my older Norns. However, it must be a newer version because the Norns will not drive this bud.

I’m attempting to install the drivers per the instructions here: GitHub - nlkguy/archer-t2u-plus-linux: TP-Link Archer T2U Plus / AC600 High Gain USB Wifi Adapter Review & Driver installation Guide for various platforms. but on the install step I keep getting an error that kernel headers cannot be found. It recommends that I use the kernelsourcedir option to to tell where they are located.

Can anyone tell me how to do this? How do I find the headers and how do I use the mentioned option to point to them on installation? 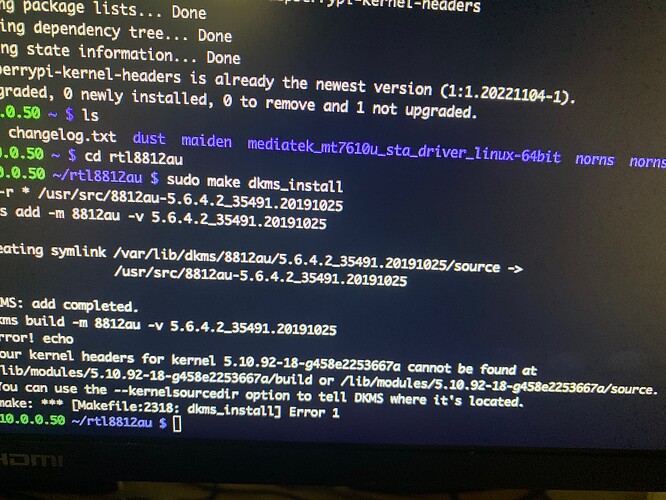 I’m not sure this is helpful, but looking at the Github, it seems like that driver is not functional for the 5.10.X kernel on ARM (which is the norns architecture) according to this issue.

generally speaking there are lots of wifi dongles out there, but I’ve never had to install drivers for them for a Raspberry Pi so I’m surprised this one needs it.

hey there,
on debian derivatives you can use the following command to install kernel headers:

then check that this location exists and is populated with the headers:

and if everything looks good:

hopefully that gets you goin!

I’m guessing this has to do with what @infinitedigits referenced with the 5.10.X compatibility, but when I run the linux headers install I get the following:

this looks like an error in the dkms_install process where it can’t find the files to even begin the install (that github issue refers to when the drivers are already installed). additionally you could attempt to install a later kernel and reattempt depending on whether the time spent is worth it to you! if you decide you’d like to pursue this further feel free to drop me a message.

Thank you so much for offering to help further. I think I’m just going to return this dongle and try for a different one.

Would strongly suggest to not use any Realtek based usb wifi dongles, they all suck because Realtek just does a (very crappy) code dump at some point and then moves on to the next chip . The one shipping with norns (assuming it’s still the same one) took a very long time/large amount of effort to get working somewhat decently.