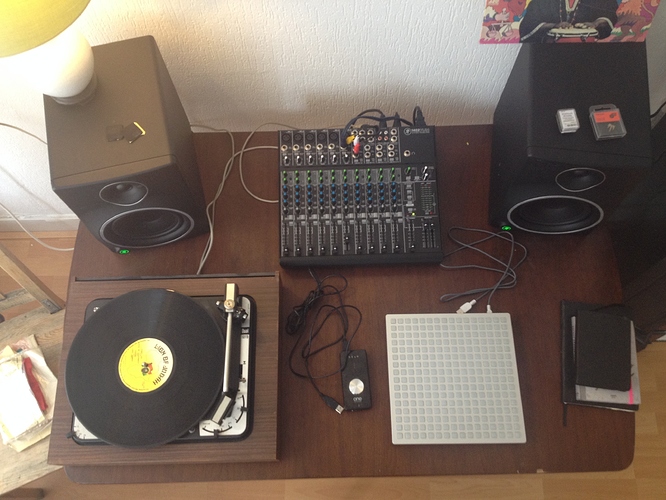 Got an RME Fireface UC. been gigging with it all over the place. rock solid drivers. well worth it.

thanks a lot for your replies! i think i’m going for the RME fireface UCX!

I am thinking of getting Babyface Pro but I want to have sometimes the possibility of having 8 line-ins in total. Could of course get something like motu with already 8 ins build but I really would prefer the portability of bp. Any recommendations on a nice option to occasionally expand it to have 8 ins? And preferably something that is portable as well.

You could expand the Babyface Pro via the ADAT in / outs with an A/D converter such as the Focusrite Octopre which would give you 8 extra ins / outs, it has clean preamps if needed and there’s also a version with compressors for each input.

Alternatively if you’d like some ins / outs to use with Eurorack, you could get an Expert Sleepers ES-8. It’s DC-coupled so you can send / receive CV too.

I have an Apogee Duet which is portable, but no ADAT. I am currently looking at expanding my ES-8 with an A/D converter.

It’s small enough to throw in a backpack, sounds great to my ears, and reasonably priced. And built like a tank…

The biggest problem I have with it is that it doesn’t work with iOS devices, but I have Apogee Duet for those…

This is kind of an answer to a question that you didn’t ask, but: I’ve the MOTU 828es, which isn’t portable, but I’d recommend.

However, for reasons I’m not entirely sure of (but probably greed) I expanded the number of inputs via ADAT and the Beringher Ultragain ADA8200. Now, clearly it’s not right to recommend such a device - but depending on your concerned about the quality of the preamps - this is a really economic way to expand your number of inputs…

Another thought, what I used to do with my Mackie was put the Alt-34 in to my Apogee Duet inputs. That way I could press alt 3-4 for whatever I wanted to record, through two nice preamps / converters.

Unless you need to record 14 channels at the same time, this is a cheap and high quality solution, with minimal change to your setup.