Crow identifies as a USB serial device, not a USB MIDI host, so it is not possible to hook MIDI devices directly to it.

Can someone explain this a bit more for someone (me) lacking solid midi/usb understanding? I understand that crow isn’t a usb midi host. But, can it receive midi from a USB midi host?

my goal: I have a crow, a teletype, and a JF. I would like to use the crow to allow me to polyphonically control the JF via midi. I have an oxi one sequencer arriving soon, and would love to use it to sequence chords on the JF using midi out, while using the rest of the CV/gate outs from the OO to control other parts of the modular.

I believe this is possible using a computer with max for live acting as a translator between sequencer and crow, but are there other options?

but are there other options?

Try the MIDI input OPs on Teletype! I have zero experience with them but it looks like you could easily have the TT send an I2C message containing the incoming MIDI messages. Dunno what the bandwidth for polyphony is like, though.

awesome, thanks! I’d obviously overlooked those. Hopefully I’ll get a bit of time this weekend to try them out and to report back

edit: I was able to get JF playing chords using the teletype midi ops. thanks again for the suggestion!

Hello folks!! Maybe this question is answered elsewhere, but researching this stuff is so cryptic, I give up!! I’m wanting to use my OP-1 as a sequencer for my Eurorack, but I only have 4hp of space in my rack, so Ansible is not an option. Can Crow act as a USB host? I’d be happy to code (and share) scripts I write if so.

No, crow is a usb Device not a Host. If you want to involve a separate computer like a Norns, though, you can arrange to forward notes from your op-1 to crow.

Hmmm, building a Norns could be fun!! Though I think there’s a real shortage of rasp pi’s these days… 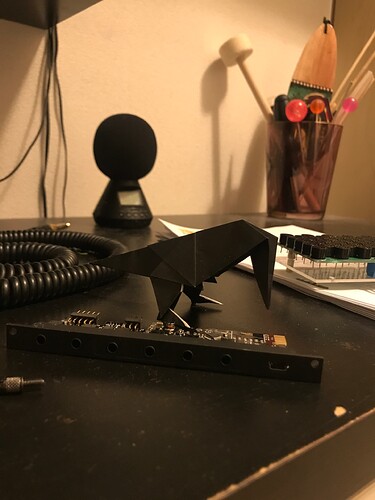 I’m not 100% sure, but I don’t believe this is standard norns-> crow fucntionality. There is no standard i2c CV message, so norns does not send those i2c messages via crow. A specific er-301 mode would need to be added to a script, as is done with just friends, to get crow to send the specific i2c messages that er-301 expects.

I believe this is a case of having to implement the sending of er-301 i2c CV messages from norns yourself, on a script by script basis.

this just outputs cv on crow outputs 1 and 2. Like @nonverbalpoetry said, to get the 301 working you’ll need to add another output mode, similar to the crow ii jf option. 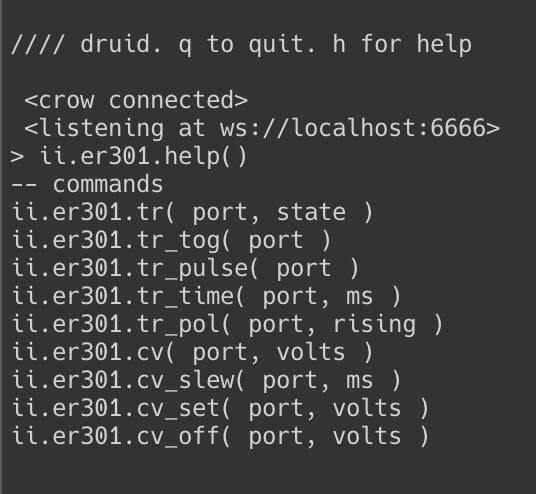 here’s a quick untested gist that adds a 301 output option to awake. on the 301 use sc.cv 1 for pitch cv and sc.tr 1 for triggers:

just drop that file in your awake folder, and it should show up as awake_301 in your select menu.

edit: this functionality has been added to awake. it’s no longer necessary to use the above gist

I won’t say that it’s tested, but this is working for me

. Will need to go update my favorite scripts

Thank you so much! Guess I need to dig in the Crow studies, now… If someone is willing to make some Crow/ER-301 scripting tutorials with inspirations of how to take advantage of this combo, it would be wonderful. Maybe a “Crow Talk” episode @EqualTemperament ?

fwiw, i went ahead and made a PR for this output mode

edit: this has now been merged into awake!

Is finding a crow pretty much impossible now? Any updates on the horizon?

Scarcity and Precarity in Small Manufacturing

To lead with an actual case: we have not been able to get the STM32 microcontroller used in the Crow (and Grid) for well over two years now, and all estimates are “unknown” (the words from various sales reps I’ve spoken to, ie those at Mouser). Since we’ve sold out and also exhausted our backup-repair-stock, if someone contacts us with a hardware-related break-- for example, somehow the STM32 is fried-- there’s basically nothing we can do (that was previously standard procedure).

There’s this post in another thread that illustrates a little of what’s going on with crow.

hello! I could likely have posted this in any number of threads but hopefully this is the most appropriate one because I think crow is likely the common denominator to what I’m trying to solve. I’ve been enjoying the teletype just type studies and was wondering if there was a way to manually launch functions in lua scripts with minimal delay, like you can trigger scripts in teletype via the trigger inputs or function keys, but without a teletype. Ideally this would be via midi notes.

edit: after some studying, realized that norns can do all this and much more.

Has anyone ever tried to use crow as a cv monitor? Since we can read the input voltages it’s probably not too hard to build a basic “oscilloscope”. I don’t have any oscilloscope or any dedicated module so I thought about trying to accomplish this with crow.

I’m curious to hear what others say about what the host-side (eg druid) mechanism for this would / could be. In my bit of experience tinkering with it, it’s relatively straightforward to reuse bits of druid to send things to crow (for instance), but I think to receive things from crow you’d have to modify druid to (optionally) send the value to whatever’s doing the visualizing over OSC or something.

Yes, that is what I was thinking as well. You’d have to fiddle around with druid to get it to work.

Regarding the ASCII oscilloscope. Sure you can do it, but I was rather thinking about using a dedicated plotting library to obtain something more visually pleasing - although, for what I want to use it a very rudimentary one might work as well.