How do YOU decide which key(s) your song is in?

What is your process?

I regularly have problems to find out the key of my song. Using borrowed chords or having too many sus2 / sus4 chords often confuses me.

Sometimes I just think about every part in isolation, but this makes it very hard to find connectable parts.

I play with open-ish tunings on my guitar which I like to switch out every couple months. This adds constraints to my music writing, but also helps to keep my ears from getting tired of hearing the same notes over an extended period.

If this process were abstracted, what I’m doing is composing a table of prearranged notes based on the rules of my six string guitar, with help from the circle of fifths, and then committing to that until my attention span gives out. Then refresh the table and keep at it!

Can you be a bit more specific? Which Instuments you use and what kind of music do you make? Personally I find the idea of composing in a key extremely old fashioned.

Roughly, after the fact, I’ll look at the starting chord and what feels like “home base.” Like @ThanosF said, I don’t think anything particularly needs to be limited to one key. Often, I’ll finish a song and then go back and change the tonal centers for certain sections. Having that variety really adds a lot.

I have always improvised a lot and the key choose itself whenever I feel like I find a nice melody or progression. This mainly refers to guitar that I have been playing for some 17 years. I remember when starting out with songwriting I would use the harmonic circle or “borrow” from Neil Young.

Now with keys and synths I have little idea of what I’m doing so I let my ears guide me and that works fine as long as I play alone. But not much composing, mostly improvisation.
I would say for myself that chance or ears decides the key.

If the song is sounding boring but I like the key, I’ll switch modes.

Edit: Oh, is the question about how do you find out what the home key of the song you are writing is? It depends- when it’s unclear it might have a few different keys depending on what part of the song it is in, or it could be in an unfamiliar key. If this is the question and you want to share a chord progression with me I’m happy to give it a shot.

Question one would be, if you have written the music already, then why do you need to know what key is in? What do you plan to do with this information?

Assuming it matters to you, the key centre means which of the 12 chormatic tones sounds the most stable and resolute in the harmonic and melodic context of a piece of music. There is not required to be a clear key centre, nor is this key centre required to remain fixed throughout and may vary between sections, or even more frequently. The modality is defined by the apparent function of the other notes played in that context, with the expected function in a given mode (e.g F# is an “in color tone” for C lydian but is a “blue note” in C minor). You could guess this by counting the occurrences of each note and assuming all the more commonly used ones are in key, and hence infer a mode/scale; Note that the harmonic and melodic minor scales have 7 modes too, so don’t rule those out either.

Great time to post this video about how to think about “what key is this in?” 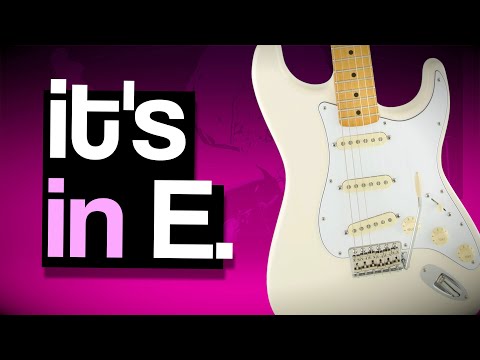 Hopping back into this thread, here’s my method:

On a related note, I just watched YouTuber Pat Finnerty’s “What Makes This Song Stink” video about a Kid Rock song. He has a segment on how the guitar solo is in the “wrong” key because the solo is in D minor pentatonic but the song is in G major.

However, the solo sounds fine to me (it’s actually the only interesting part of the song in my opinion

). Finnerty plays the solo in the “right” key, but this version is, to my ears, much more boring. Then he plays some other classic guitar solos in the “wrong” key the same way that the Kid Rock song is “wrong,” and they similarly sound much more interesting to me.

(has some NSFW language)

My point being that “key” is, in practice, a pretty loose concept!

I’m really into the idea of a key or usable scale being some subset of the chromatic scale that is melodically interesting.

The obvious ones are all of the minor and major modes, but this website lets you punch in some pitches and points out every scale that could work for it as long as the scale is not some chromatic clusters. The idea being that any sort of WH relation is interesting as long as you don’t put HHH in the mix.

(W being whole step and H being half step)

Its pretty great for finding frames of reference that are not what you might be drawn to initially.

Composers of the 19th century (and before) had a firm classification of what key is about what mood. Was pretty interesting to me:

As someone with pretty average sense of pitch that whole idea of a particular key sounding a certain way or conveying a particular mood fascinates me! I suppose with acoustic instruments the way partials will sound is going to vary in a way that with a synth patch is just not the same. But in general, I just don’t get that kind of analysis at all. Even assigning a set mood to a scale (yes, even major vs. minor) seems weird.

Thank you so much for your replies!

I bought an Ableton Push 2 a few weeks ago. Using it to record some additional instruments on top of audio tracks made me realize how often I change keys within a song / borrow chords from another key / change between major & minor etc. Because of this I’m not really able to use a scale mode on Push 2 or similar devices for the whole track.

Another thing that constantly happens to me is running out of “playable” notes in sample libraries where maybe only 2 octaves are available. Not every instrument sounds good if you manipulate the pitch up or down.

Working with other musicians can be a lot easier if you are able to explain a piece of music on a theoretical level. Normally I have MIDI tracks in my DAW files for the chords that are played by the main instrument in the section. Sometimes I pull harmonies / melodies out of the audio tracks to a MIDI track for easy doubling of a phrase.

So it is more about road blocks in my individual workflow and communication if that makes any sense.

If I’m working on something that’s not diatonic and want to add some more tuned stuff I think more about a scale than a key, like someone’s table of available notes idea earlier. The scale may have less than 7 notes. And I do this with a bit of theory and a lot of listening / trialling notes.

When I’m trying to figure out which notes work all the time, it either becomes clear that there’s one scale I can use or I stumble over some kind of changes I can play with. The latter helps other humans I guess, but is not super helpful for setting up machines…