How do you use your Ansible?

My understanding is that there needs to be a set of pull-up resistors in the chain somewhere to power the ii bus (so, ansible+JF alone won’t get it done). Those can come from either crow or teletype. From there, I suppose it’s just up to you to decide which thing you want to pair with Ansible/JF. I go back and forth in my rig.

Ah I see so it’s just enabling the passage of data at the base case, rather than actually impacting the sequencing.

Obviously I’m sure there are ways to integrate Kria with Crow/TT commands that expand the scope of the sequencer a lot, but I still have yet to use Kria so I won’t get too ahead of myself for now!

Yes, that is definitely the case, and teletype is probably the tool of choice there. All parameters of Kria are directly accessible via TT. Ansible can also be used as a TT expander when they’re on the same ii bus.

I haven’t ever attempted to call any Kria stuff through crow, and don’t even know whether that’s possible or not.

But, assuming norns is a part of the equation here (and it sounds like it is), utilizing the gates from Kria to trigger actions on norns via crow can be quite lovely. The options are endless.

there needs to be a set of pull-up resistors in the chain somewhere to power the ii bus (so, ansible+JF alone won’t get it done).

Since JF v4.0 there are some I2C pullups enabled on JF, you can connect Ansible to JF directly with no other modules as long as your firmwares are up to date. Or to W/. TXo and ER301 do not have their own pull-up resistors, so they would need an additional module or backpack to supply power to the I2C bus.

There is a lot of I2C support on Teletype, I’m not sure if Crow has all the commands wired up but it would be relatively easy to add any that are missing. Many controls are already available, e.g. see crow/kria.lua at main · monome/crow · GitHub and other files in that folder of the Crow code.

Since JF v4.0 there are some I2C pullups enabled on JF, you can connect Ansible to JF directly with no other modules as long as your firmwares are up to date.

Oh wow! I did not know that! Thank you.

don’t forget there are also alternative firmwares available for ansible:

this is a guide to all the various firmwares available for monome eurorack modules. it includes the official firmwares, their modifications (mods) and alternative firmwares. this is a wiki post and is meant to be maintained by the community. the guide is grouped by apps. please note that in some cases apps share names with modules - the guide will use “app” or “module” to make the distinction clear. for each app and version the guide will list what modules they can run on. links to firmware ima…

I loved ansible just for Kria + Cycles.
The bonus of Earthsea being added and then interfacing with Just Friends was huge.
I now own two

If I’m understanding right so far, the Ansible is primarily a collection of great sequencer-focused apps (especially Kria and Earthsea) that are driven by monome interfaces.

Plus the ability to extend via i2c and control/be controlled by Just Friends/Teletype/er301/etc.

Is the i2c stuff about the ability to pass more parameter values than is available via the jacks? Why not just patch?

(Sorry for the basic questions, just trying to get my head around it and figure out what all I need to spend to get it in a good usable shape)

Usually it’s not too dissimilar from patching, but you can often do things you can’t do on the front panel (e.g. JF polysynth mode) and even if you can, it gives you more free modulation nodes to send control behind the panel

Also you can store / recall presets on a lot of modules!f

oooh, store and recall (maybe through levels I’m guessing, I have an arc) could be wonderful.

I love all the JF integration stuff but seeing as that module is currently unobtainium I’m especially interested in how people are using Ansible with general euro stuff.

for a general euorack use: recently i’ve been using Kria as a drum sequencer. patch the 4 gate outputs to 4 inputs of my squid salmple (would work with any drum triggers). something that kria excels at is changing patterns on the fly while maintaining visual feedback for all 4 tracks. i have played with other sequencers that can approximate the end result (different step lengths for each track, changing patterns on the fly, etc) but there’s always something like having to switch tracks that gets in the way compared to the playability of seeing all 4 tracks on the grid plus the immediacy of the shortcuts.

also this post by @tehn resonated with me to approach the drum sequencing as a more engaged instrument, not just “set it and forget it” kind of thing.

thank you for the kind words! very happy to hear about all of the outdoor listening— highly encouraged. @mattlowery that kick evolution was a chance capture— which may even be in the video linked upthread. i remember the first time i “played” the “live step-sequencer” (must’ve been the korg ER-1 around 1999?). it seemed insane to “store” a pattern when the “editor” allowed you to furiously modify all of the parts in a never-ending evolution. i still think the multi-track live step sequencer (ie…

I have a 64hp pod that houses an ansible and JF combo with a stereo/dual filter, a nearness, beads and a headphone output. There is a TON of flexibility in that small box.

I use kria & earthsea with the jf in poly mode via ii, use kria with jf per voice allocation on the first 3 voices and one to beads via cv/gate. I use earthsea to drive all kinds of oscillators in my main rack via cv/gate combos. With some creative patching one track of kria can be a synth voice and the other 3 can be percussion with modulation. I’m sure I’m forgetting something? Still haven’t really gotten deep with meadowphysics.

I originally bought a grid to pair with my norns, got hooked playing around with the islands script which has some of the kria and earthsea sequencing features. Once I picked up an ansible, I really appreciate how much awesome ui design went into programming all the cool tricks you can do and how much info can be conveyed with just a grid and no screen to tell you what is happening. The ratcheting and glides are

And not least: my norns is freed up for other things again!

These are all really helpful and helping me get brain wrapped around Ansible!

Ansible Kria and JF via i2c is a hugely rewarding combo - giving you access to polysynth mode on 4 channels. I am just also starting to use w/synth with Ansible i2c which I think is a hugely underrated FM synth - it’s a bit grittier than JF. If you have Expert Sleepers EX - it also works via i2c.

For meadowphysics I use the scales preset page as a live keyboard to make melodies with JF in i2c mode. This app is so simple to create minimalistic style polyrhythms.

For earthsea - I use it to hand trigger sliced drums on the er301 - cv is multied and sent to multiple modulation points - pitch / slice / delay time - I save different patterns. This is really for asynchronous odd timing loops. I use it also for synth lines and arpeggios / live looping with w/

Kria - is killer for live performance - bulletproof pattern chaining and song mode “metasequencing” it’s been my workhorse sequencer since it was released - I use it with Just Friends i2c or load up 4 synths on the er301 via i2c. Also I use 4 channels with 2 mangroves - 2 channels per osc - 1 for cv/gate 1 as a modulation lane for each osc.

I have an Arc and also use Arc Levels sequencer with JF via i2c one in static tuned hand played mode and one as a sequencer. This app has never really changed since release but I have loads of ideas / improvements.

Arc cycles I use less but I like the triggers on it to trigger samples on the er301 and sliding through long samples turning dials - good on granular stuff.

I use my ansible to run kria 99% of the time. It’s just such a playable sequencer that can get very interesting very easily!

I have a bunch of videos on my YouTube channel that show how kria can be programmed on the fly that may give you an idea if the workflow would work for you or not. Here’s one of my favs: 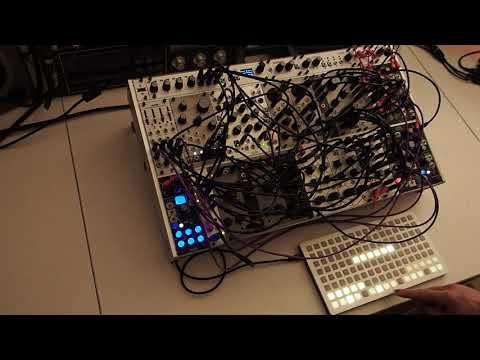 I also made a tutorial video for kria last year that may also be helpful to you: 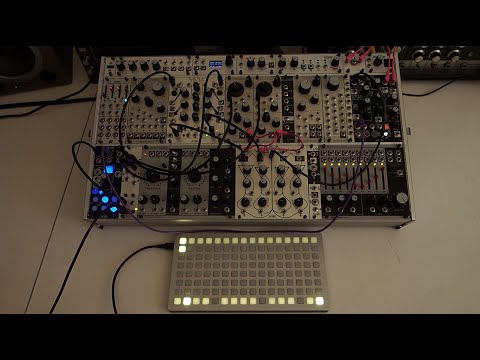 I think it would be a good choice for you if you want to focus on learning a powerful and playable sequencer. I also have norns and crow but for me find that I don’t really have much use for the different novel sequencers available on there because kria does more than enough for me already. But for others, exploring different ways to sequence notes and gates may be more interesting and rewarding. I guess it depends on what you want out of using modular and your personal preferences!

I guess it depends on what you want out of using modular and your personal preferences!

Definitely always does, but your examples and others is absolutely helping me understand how this module fits into a creative practice. Thank you!

Since JF v4.0 there are some I2C pullups enabled on JF, you can connect Ansible to JF directly with no other modules as long as your firmwares are up to date. Or to W/. TXo and ER301 do not have their own pull-up resistors, so they would need an additional module or backpack to supply power to the I2C bus.

Excuse the noobing here… so if I have JF and Ansible both on latest firmwares, then I can just make one direct I2C connection and voila polysynth (via Kria)? Any thing else I’d need to pay attention to besides the grid setup?

Yup,
Thats all you need now.
You will need to adjust some settings in Kria which you can find in the advanced settings in the docs.
Its heaps of fun once you get it running!

I have a hard time making sense of the explanation on that page. Just Friends works if I enable the top led on column 6. But the documentation seems not to align with the available leds. Can anyone explain what the 3 below it and the 2 right next to it mean? 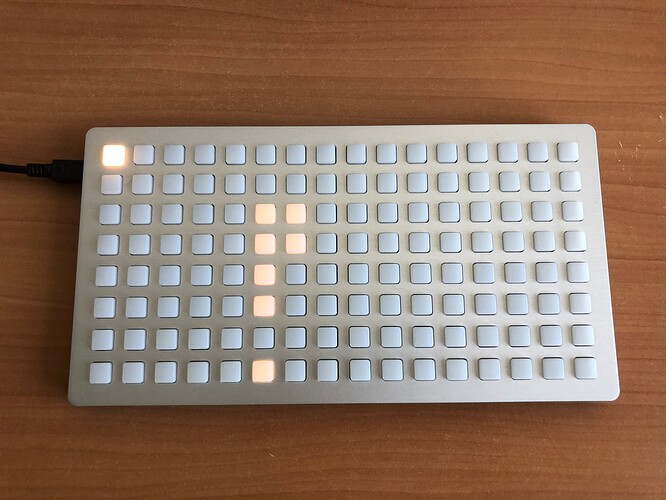 Also, can Ansible handle multiple Just Friends on the same bus when in leader mode? What will happen? The reason I’m asking is I’ll have a Teletype controlling 2 Just Friends and 1 Ansible, and want to occasionally enable Ansible leader mode to control one of the Just Friends instead of them both being controlled by Teletype.