How is the support for Monome on Windows 10?

I’m a long time lurker here and I’m finally thinking about getting a monome but I’m a Windows 10 user and most users here seem to be Mac users so most of the support seems to be for Mac. Does it work well on Windows 10?

As far as I know it’s working fine.
https://monome.org/docs/setup/

I’ve not had any probs using the max for live stuff in Windows 10.

Mostly using Windows 10 here, and it’s really been a no-headache thing, haven’t had a problem in a long while.

I have a Monome 128 (black rubber-like body, white LED buttons) that I haven’t used in a few years. I’m trying to get it working again under Windows 10 and Max 8.

My first problem is that It’s not clear what version of serialosc to use. It looks like there’s version 1.4.1 for Mac only and 1.4.2-pre (which presumably means pre-release) for Windows. Is 1.4.2-pre the right one to install?

When I do that, it appears to recognize my Monome, but I can’t find anything that will let me determine whether it’s working properly. There used to be a Max patch called monome_test, but I can’t find that anywhere, and apparently it was deleted from my computer (presumably by antivirus software by mistake) at some point. So what’s the easiest way to be sure that it’s working?

Once I’ve connected and disconnected the Monome, there appears to be a process called serialosc-device.exe that keeps running and using substantial amount of cpu. That doesn’t seem right, so I must be missing something.

Can someone who has a Monome working on Windows 10 help me out here?

apologies for the confusion! 1.4.1 has both windows and mac builds: Release 1.4.1 · monome/serialosc · GitHub. did you see that 1.4.1 was mac only somewhere in our docs?

1.4.2-pre is an experimental build meant to be used after confirming that 1.4.1 doesn’t work on a specific device. i’d try 1.4.1 first (and remove the version you installed).

There used to be a Max patch called monome_test

there’s a grid-test Max patch bundled in the monome Max package – if you have the package installed, you should be able find it through Max’s File Browser: 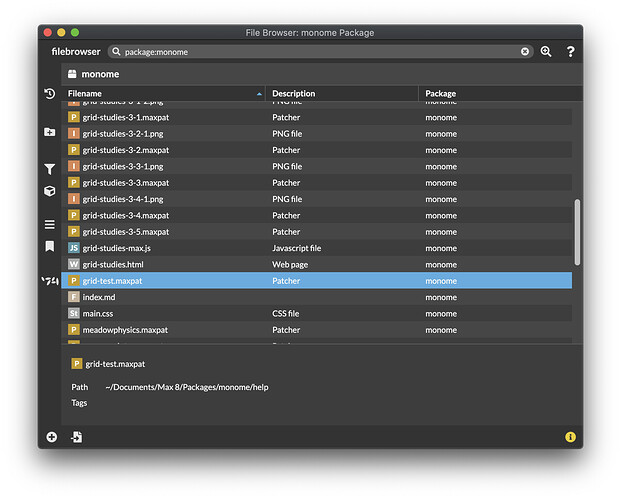 if your grid is not being detected after the clean 1.4.1 and Max package downloads, please follow these steps. let us know where things end up!

I am indeed doing fine… thanks!

It makes perfect sense that Monome tools would now be distributed as a Max package–so I found it and installed it. I also installed 1.4.1a.exe after deleting the prior serialosc.

Now when I try the Monome test patch, it works! However, when I disconnect the Monome, I wind up with an instance of a process called serialosc-device.exe that seems to be taking a substantial amount of cpu.

I have Wacom drivers on my machine, so I tried deleting them. No difference.

However, when I disconnect the Monome, I wind up with an instance of a process called serialosc-device.exe that seems to be taking a substantial amount of cpu.

ah! known issue: windows, cpu to max on grid disconnect · Issue #54 · monome/serialosc · GitHub, i’ll add your case! are you able to kill the process alright? or does it hijack? just looking to get a sense of urgency – apologies, we don’t have a windows machine in the workshop.

(also, thank you for the heads-up that the windows build links to 1.4.2pre!)

Yes, I am able to kill the process.

Looking back at the discussion of the problem suggests that it might have something to do with a file named wscript, which looks like Python code. I can easily edit Python code on my machine, so if there’s something you’d like me to look at or try, just let me know.

I think I was the one that needed to 1.42 built as using grid 256 and arc together kept disconnecting from serialosc. Been using it ever since without problems

So i have Lyme and I didn’t connect my Monome for like 8 years or nine years.
Now i am getting better, blew up all my money but iam ready to start making music again. Tried to connect my Monome to play and after installing the serialosc my Monome 256 its only working like 64, i need help i know its a simple problem but I can’t get out of it. I have a windows 10 desktop.