How To Buy a Piano

Hi friends. One of my 2021 goals is to finally buy an acoustic piano that I love playing. Virtual instruments are amazing, but I want to reach out and touch something.

I know that we have more than a few seasoned pianists among us, so I wanted to ask: how should I go about buying an upright piano?

It will be a studio instrument, not a showpiece. I’d like the option of felting it from time to time.

We have two local stores where I live, one that deals Steinway and Kawai, and one that specializes in Yamaha.

I am initially drawn to the Yamaha U series.

But please, guide me!

Oh and, bonus points if you’d like to recommend a stereo set of mics.

I have a beautiful old Baldwin Acrosonic that my neighbor gave to me for free and the only cost was hiring some people to move it. I’m not an expert, but there are a lot of old pianos out there that people are just waiting to get rid of, so check your local craigslist, facebook marketplace, or ebay local pickup. You may have to pay to move and tune it, but that’s way way less than buying a new one.

if you’re buying a new piano, or a lightly used one from a reputable shop, then it’s not super complicated. get the instrument that sounds good to you and know that you’ll have to pay for a tuning a few times as it acclimates to your studio.

most of the challenge of buying a piano comes when you’re attempting to buy something cheaply and trying to figure out if it has some wear that will make normal playing or upkeep much more difficult/impossible. you can find some amazing used stuff at great prices, but it comes with much more risk. a modern upright should be just fine for all this stuff unless someone has treated it very roughly.

the feedback and touch of a true mechanical action makes such a difference, you’ll love it.

I would recommend a Yamaha U series piano too. And, like @Jonny have said, you can buy it easily second hand. But don’t try to move it yourself or with a few friends. Hire some proffesionals to move the piano. They will usually make you a good price for moving and afterwards tuning it. Good luck!

In addition to considering what the dealers have available, I suggest that you contact the guild of piano technicians in your (extended) area, or at least contact local piano techs individually. They often know of pianos that may be available, but not on the market, or can let you know if one does appear. For example, they sometimes are working collectively on guild project pianos to learn restoration, or they may share info on clients wishing to sell or trade. I found my piano this way. It took several months, but in this way I found both an excellent used piano and an excellent tech to keep it in shape.

Piano tuners.
I have a friend who tunes pianos ( I don’t find the correct english word for this profession). He is often a good starting point for peoples looking for second hand instruments as he has a good view of the local market.
Édit: cross post !

I’ve heard this a few times, but I’m weary of going this direction because I wouldn’t know how keep myself from acquiring a lemon. I want something I can keep for the rest of my life and hand down. Thought about maybe hiring a piano tech to che k out some local used options though. Anyone here gone that route?

Interesting. I will look into this.

Edit: perfect! There are three in my town. Thanks for the advice! I’m in no rush, so I will probably reach out to these guys and see if any of them wants to help

Thought about maybe hiring a piano tech to che k out some local used options though. Anyone here gone that route?

if you want to go that route, then yes, I’d strongly suggest hiring a technician (or, as others have mentioned, find your piano through a technician to begin with).

Regarding piano mics: my studio room is not the most isolated place in the universe (goddamn squirrels!!).

I would imagine close micing with a fairly tight polar pattern would be the way to go, yeah?

Sorry, I am detailing my own thread.

I like to use a pair of omnis in AB config.

Ok! Just talked to a tech who lives about a mile from me. He’s in his 70’s and is going to be my guide.

Thank you all! Will report back if I find something cool.

Excellent! Can’t wait to hear how this pans out

Following your quest with much selfish interest

In the meantime, there’s lots of searchable information (articles, forum discussions, mic manufacturers’ resources) on options for micing upright pianos. E.g., Sound On Sound, GearSlutz, DPA…Have fun! My preference is to mic the soundboard from the back of the piano, but that’s for a piano performance sound, not for sampling mechanical sounds. Of course, can’t do this if piano is against a wall…

Not really a direct answer to your question but just a tip that comes to mind - you can get great deals on really old pianos if you can find them. I have a Steinway upright from the 1890s which has been lightly restored. It looks and sounds great, and it’s much more unique/interesting looking to my eyes than almost any piano made in the last 50 years, plus it feels like owning a bit of history. That being said old pianos need to be tuned a bit more often. 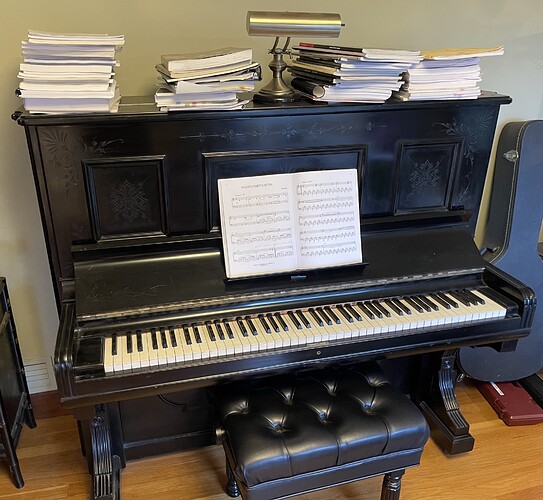 Regarding piano mics: my studio room is not the most isolated place in the universe (goddamn squirrels!!).

I’ve found that for miking the “goddamn” variety of squirrels, definitely you want an omni with good high frequency extension

I’ll share my setup/approach which is ever-changing as I’m always learning ways to improve, but anyway

Step one is figuring out the space-

I have a fairly well-isolated studio as far as external noise, and a pretty dead room with lots of absorption as far as internal. I have sort of a poor-man’s live-end-dead-end thing going on acoustically and the piano is in the “live” section (which is still fairly dead as it’s a low-ceiling bedroom). I had some leftover absorption material when I was setting up the space, and the piano was feeling a bit muddy since it sits in a corner, so I wrapped a bunch of absorption material up in fabric and it lives on top of the piano essentially as a big bass trap.

The front cover hasn’t been on my upright in years- I always keep the strings exposed since I’m always playing with them, and it sounds better to record it with the cover off since it adds some clarity, much-needed volume when doing felted stuff, and you get all those fun mechanical noises.

As far as mics go, I’m not a wealthy man so atm I use Oktava 012’s, typically with the omni capsules though I have used the cardioid capsules from time to time if things are getting too messy with the room sound. Mic placement varies per track based on what register I’m playing in, if I’m single-felting or double-felting, how loud I’m playing, the dynamic range of the piece, etc.

Always an AB setup, and to find the right placement both left-right and front-back (relative to the piano) I’ll record a bunch of different placements, write them down, then pick which one I like best. Typically the mics are 10-18’’ apart from each other, and anywhere from ~10-24’’ away from the strings. I’ve found more often than not with my setup, the best sound a lot of the time is having the mics parallel with where my head is, but again this could be wildly different for you depending on all these variables. As far as placing the PAIR left-right, I usually dictate that by what register I’m playing in and set up the mics on the left and right bounds of that (it’s rare that I’m playing way up and down the keyboard).

Because these mics/my room aren’t the best though, I typically process the shit out of things and have to spend a lot of time EQ’ing, often pretty heavy-handed, to get things sounding clearer. This is often a lot of surgical subtractive EQ in the low-mids, and some boost in the highs to bring out the mechanical sounds. And if going for that intimate felty sound, obviously compression is a must, but I have no set-rule for how I do that as it can change a lot based on the track, just use your ear

the only constant is cranking the makeup gain a bit since the compression is typically pretty heavy and the source sound is fairly quiet to begin with. I use Fabfilter plugins (for basically everything) but you could achieve the same effect with whatever.