How to tune two synths together

This is a pretty silly questions for those of you who are trained musicians, but I’ve always been a DYI player, so…

I use to play a make noise 0 coast together with a moog grandmother and I keep on twisting the pitch knob on my 0 coast until I find a sound I believe is in tune with the grandmother…but I would love to know what should be the scientific approach to tuning 2 different synths together.

Yeah. You could even start with a free/cheap tuner app on your phone.

Owning a tuner or a tuner app isn’t a bad thing. Tune the Grandmother (so when you play a C it’s actually a C) with the tuner then connect the keyboard out CV of Grandmother to the volt/octave CV input of the 0 Coast, then adjust the O coast tune/fine tune until the notes are the same (you could use the tuner again if you liked).

Someone said that tuning on a synth keyboard is checking that the C is really a C…it is not easy to tune the 0 coast with that pitch knob and the fine tuning…in the end I always find a setting I like, but I would like to understand the theory behind it…I suppose it’s like moving the keyboard under your nose with a knob

Best reply till now. Which tuner would you suggest? Thanks a lot

Why the KB out in V/octave on the 0 coast?

Best reply till now. Which tuner would you suggest? Thanks a lot

I use a cheap Korg one that was originally for guitar. I believe there are great free tuner apps - you might want to try one of those first.

Why the KB out in V/octave on the 0 coast?

Keyboard out of GM will be volt/octave, which is what the 0 Coast expects. 0v would be a low C, 1v would be a C an octave above, 2 volts would be a C 2 octaves above… etc.

As others have said, you need to tune your root note but the other thing to check is how well your synths track over several octaves. You may need to calibrate them.

I tend to do my sequencing from the computer so I usually route everything through the pitch block in Native Instruments Reaktor Blocks. Silent Way by Expert Sleepers would also work.

If I were using a Eurorack rig with a midi keyboard, I would get a Bastl 1983 midi to cv module. You can plug your oscillator output into it and it will automatically make sure it sends the correct voltage to keep things in tune.

With just CV and no automatic tuning, I would think about getting a tuner like everybody else has said. If you’re ok with digital effects most multi-effects pedals also include a tuner.

I have a little Korg TM-50 that I keep by my modular, with a 1/4" to 3.5mm adapter. It just takes a few seconds to tune up whatever voices I’m planning on using in a patch.

If I’m sequencing from a computer or MIDI, I use Expert Sleeper’s Silent Way Voice Controller, via the ES-3 and ES-6 modules. It automatically tunes/calibrates your VCO’s with the click of a button and you don’t even have to touch the pitch knob. 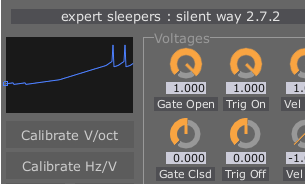 Just a related tip (maybe it’s banal, but I thought I’d drop it in): since they’re both analogue, don’t even think about tuning them before at least 20 minutes from switching them on, or they’ll probably drift out of tune again.

What is tracking? First time I hear about this

tracking is (in this context) the special analog “joy” of making sure 1. that each synth agrees that an octave is actually an octave (e.g. low note being in tune but then getting out of tune as you play higher notes) and 2. how well the synth does at actually holding on to the tuning you’ve set (that famous “drift,” for good or ill)

I am thinking about buying the TM50. So you think it could be use with any kind of synth?

@WhiteNoise Yes, I haven’t had any issues tuning instruments with it at both line and euro levels.

Thanks a lot I’ll do that

I use to play a make noise 0 coast together with a moog grandmother and I keep on twisting the pitch knob on my 0 coast until I find a sound I believe is in tune with the grandmother…but I would love to know what should be the scientific approach to tuning 2 different synths together.

You say “the theory behind it” but there is not a lot of what I’d call theory to setting the base pitch of an analog synthesizer. You’re just choosing the pitch when no control voltage is applied - ie, what note 0V maps to. Then, each volt of CV maps to an increase in pitch of an octave. This is why some people will adjust the pitch knob whilst feeding in a known voltage, eg 2V or 3V, to map 3V to, say, C3 (nicely audible) and then still be in tune down to C0 (which is a much harder note to tune by ear). (If you set them to C3 when they had no CV applied, the only way to go to a lower note would be to apply negative voltage, which isn’t always as easy on many systems).

If they’re both in tune with no voltage applied (or with the same voltage applied), then, if they both track V/Octave, they should be at the same pitch for the same voltages. But they might not be! Reasons they wouldn’t be come down to issues of calibration, and which we might describe as ‘bad tracking’; sometimes this is user-servicable, sometimes not (for instance, on a CEM3340-based VCO I made, it’s a dance that requires a tuner and adjusting two trimpots until the VCO tracks across many octaves). As mentioned earlier, synths can also drift with temperature, which is why analog synths often really do need to literally warm up.

Of course, if you’re only playing the instruments with each other, does it matter if the unmodified base note of the instrument is an actual note in a western scale? Not necessarily! The only time it matters that you’re tuned to a known key, on an analog synthesizer, is when you wish to play with other musicians at the same key. Then you can’t just tune one instrument to another; you’d have to tune them both to a known pitch - eg, tuning to A=440 - rather than just “they both are the same”.

Tracking can be a factor in tuning. I usually tune so that 0V is the lowest note I’m going to use for that oscillator, rather than 0V = C0 or something like that. That way I can use lower voltage pitch CVs, which tend to be more accurate if the tracking isn’t perfect.