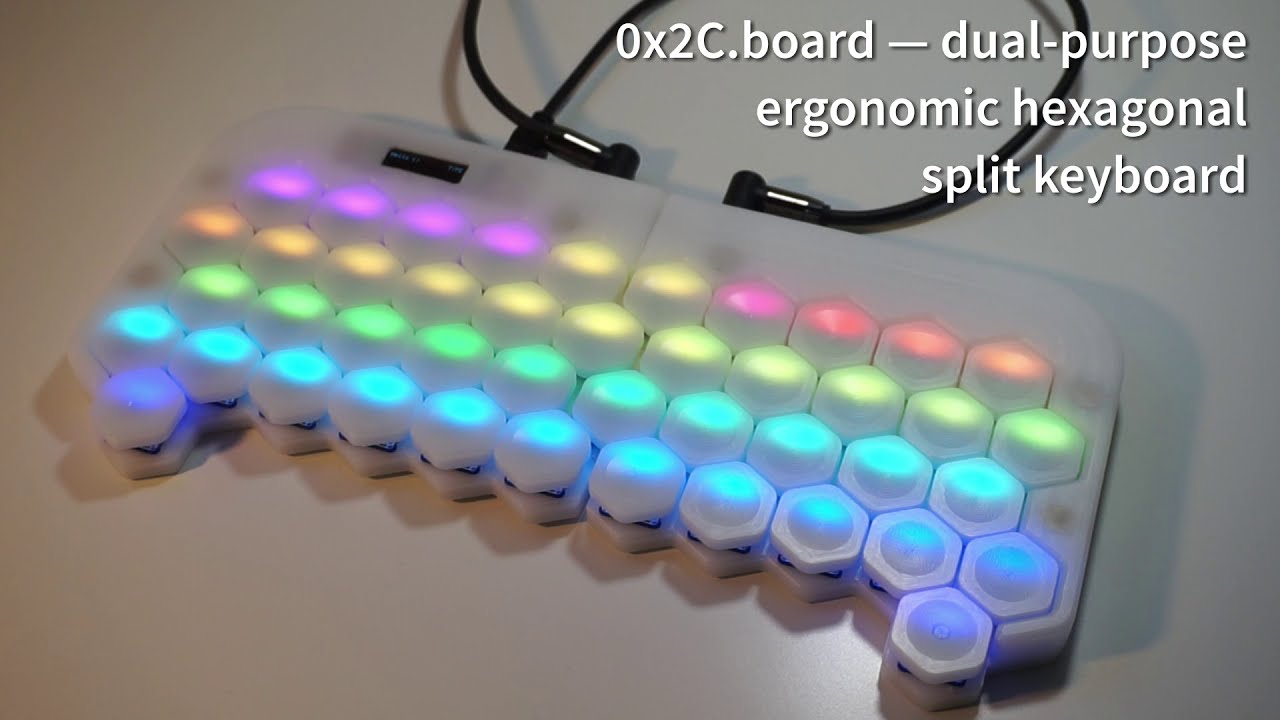 This is a split mechanical keyboard and Wicki-Hayden layout MIDI controller that I am working on.
It’s still a prototype, but I’d be very happy to hear what you think! 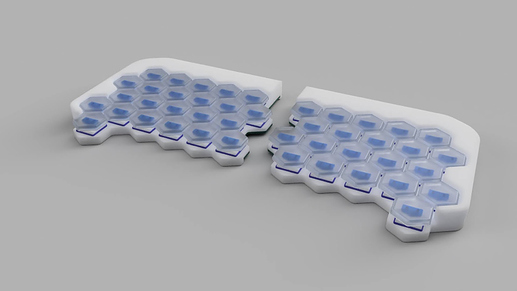 In the MIDI configuration, the two halves are joined together magnetically to form a 42-key surface. With the “Janko” isomorphic layout, it spans 21 semitones with each tone stacked twice vertically and has two meta/modifier keys left over.

The RGB backlighting can be used to highlight a set scale or, using custom firmware, do other things like sequencing.

When the halves are separated and turned inwards slightly, the keys line up nicely in columns matching the range of motion of each finger. Each half has a thumb cluster of four, and thirteen keys for the remaining fingers that are accessible without moving the wrist, this way the 26 letters of the alphabet are all easily reached and there is plenty of room for modifiers.

The electronics are compatible with the very popular QMK mechanical keyboard firmware, which allows the layout and functionality to be customized fully and comfortably. 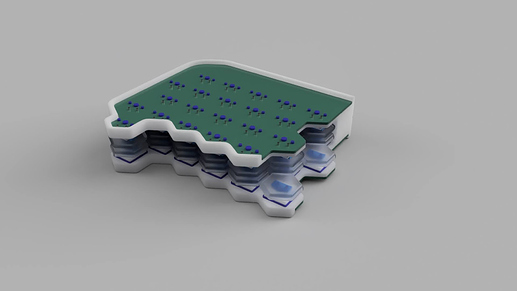 When not in use, the two halves can be folded over and connect magnetically. This way it should also be safe to transport in a fabric pouch. (The final version will have the bottom covered as well.)

I am still wrapping up the initial prototype: one half is mechanically functioning but still lacks some LEDs (which should arrive in a few days) and the other half still has to be constructed. I’ll update this thread as I get everything working

The hexagonal keys are cast in epoxy resin using molds I mill out of machinable wax, but that is a really tiresome and error-prone process. If there is enough interest, I am thinking about raising some money through crowdfunding / group-buy to have a batch of keys injection-molded so that I can make kits available online.

I’m working on a mech-key (cherry-mx) midi keyboard thing right now as well. I just read about those Kailh Choc keys (on keebtalk) and I’m curious how they compare. (just dipping my feet into the mech-keyboard world so don’t know all the ups/downs of specific switches just yet)

Is your base 3d printed?

I’d love to see a front of pcb picture to see what you’re doing for the leds.

My recent discovery is the sk6812-Mini-E package which have mid-mount gull-wing contacts so they’re super easy to solder (vs typical 2020s). (picture here) I’ve got them soldered on the back side, and holes so they shine through the pcb.

…and I’m curious how they compare.

The main difference with the chocs is that they have very short travel and are just very flat in general. There are some people who love them for this and say its great to relieve some strain for your fingers. I thought that might be a good idea for my next keyboard, and also useful for the musical use case.

Is your base 3d printed?

It’s CNC machined out of Delrin (POM), but it could feasibly be printed. I just like the super smooth finish this process leaves me with

Man, I was looking for something like that! That’s awesome, would’ve spared me a lot of headache and might be a really good choice for the next iteration.

For this prototype, I had some additional constraints because this being my final project for the FabAcademy, I have to demonstrate some of the things I learned. That means milling the PCBs myself. Milling PCBs accurately is pretty hard because the PCB stock tends to be slightly warped, so I went with a much sillier approach using 5050 LEDs: I have a cutout that the LED sits in, then I make little solder bridges to hold it in place and connect. Its suuuper tricky to get the solder to properly bridge and really a terrible solution that I can’t wait to switch away from.

Here’s some pictures of the raw PCB: 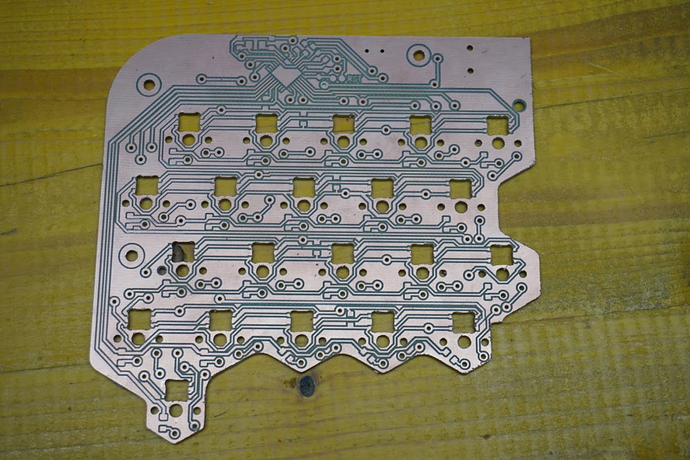 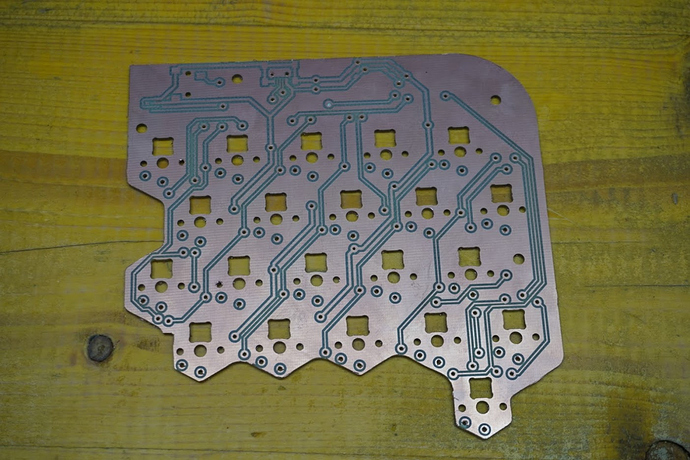 …and some macro eyecandy: 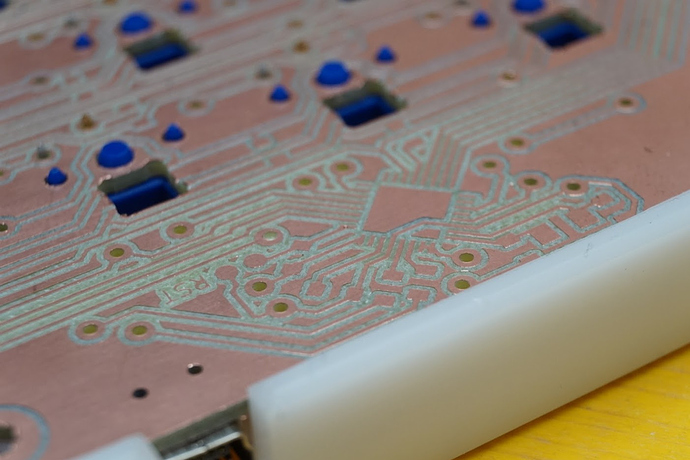 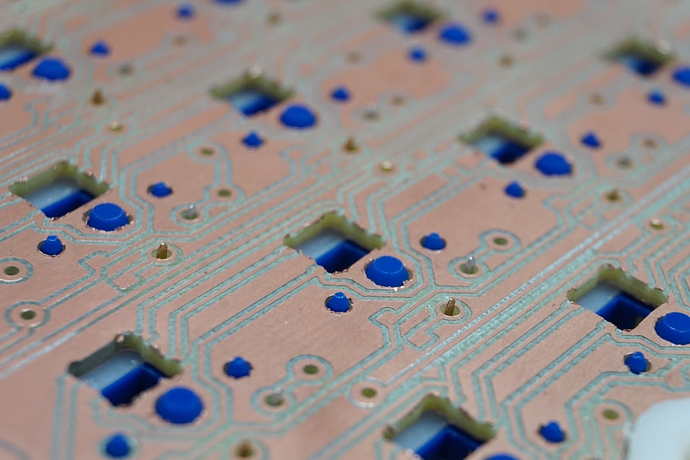 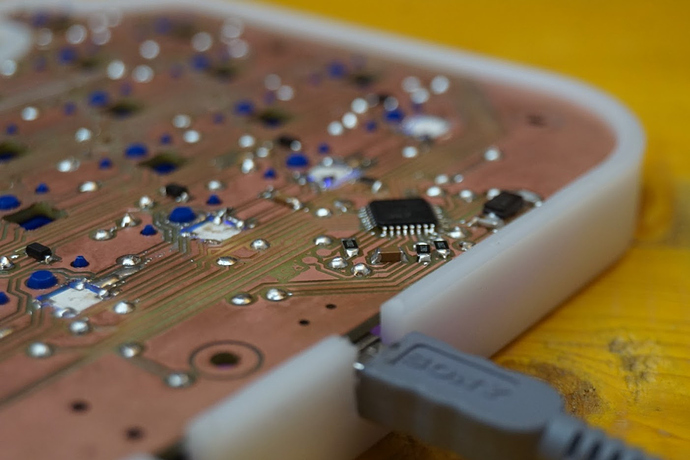 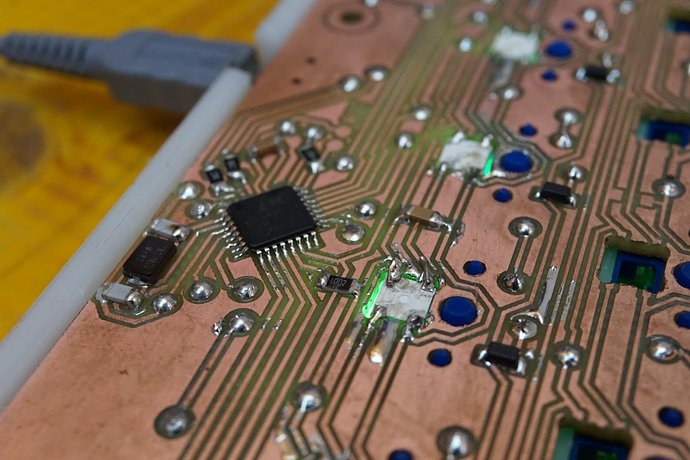 Wow that looks great. I’ve no experience with milling pcbs so that seems a bit mind boggling to me.

I have an Eagle footprint I made for the sk6812-Mini-E which I can share if you like. It ends up being pretty similar to your solution, just easier to deal with. (although they do require a bypass cap so parts count goes up)

Did you just go with the measurements from the datasheet or did some experimentation go into it? I use KiCAD so I would have to redraw the footprint either way.

The ones I currently use are actually also SK6812 / Neopixel RGBW. At the moment I have one 100nF cap for each row of LEDs (so 6-7 LEDs) but I’ll do some testing and see if I need more. The keyboard already needs one diode per key, so a couple extra passives won’t make a big difference anyhow

I’ve no experience with milling pcbs so that seems a bit mind boggling to me.

It’s somewhat fun but can also be pretty frustrating. I think its great when you need something working very quickly, or just want to verify an idea or schematic, but if you want to have a couple of boards fabbed afterwards you end up doing all the routing twice because the constraints are completely different. The tracks and spaces are 2-5x bigger than commercial boards, and I have to add a rivet in every via by hand for example. Generally you would want to keep it single layer so you don’t have to do that, but for a switch matrix that just isn’t possible

Did you just go with the measurements from the datasheet or did some experimentation go into it?

Measured/eyeballed from the datasheet and did the “print the pcb layout” thing to compare when I got the leds in (as in the picture I liked above). Then I did a couple test pcbs - which work ok. Revised it slightly to clean up silkscreen and notch the GND pad to match the component. Not bad for the 2nd or 3rd part I’ve tried to design from scratch.

Update: first half all soldered up and working! The LEDs are mesmerizing…
Now to configure a MIDI layer on it 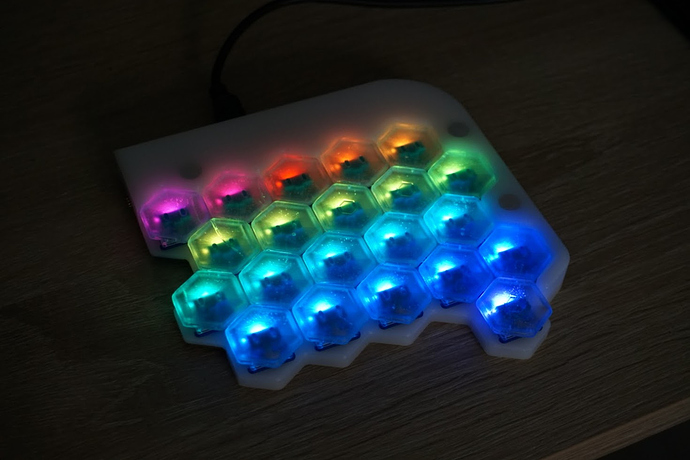 As an aside; I have recently been using a great musical device with Kaihl switches and I LOVE the way they feel. I think that was a great choice for this project of yours and I’m super excited about the idea of trying it out one day. 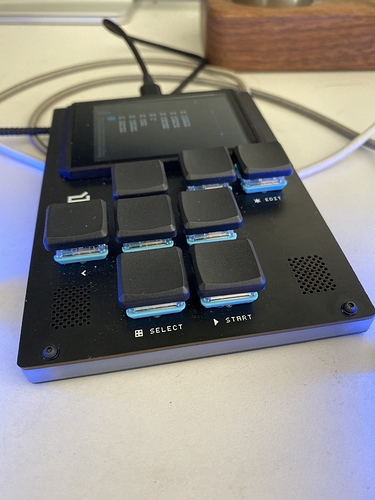 Ooh, that thing made big waves the other week

Are those Kailh Choc blue (clicky) keys? How would you feel about those for a more performative device?

Right now I’m using linear switches with a very low actuation force (20g), but of course these can be swapped out based on preference easily.

A little update also: I got MIDI to work in QMK and put together a Wicki-Hayden isomorphic MIDI layer: 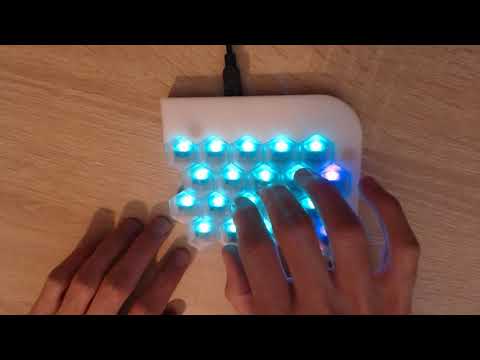 I’m honestly blown away by how well this layout works! I know very little about music theory and can’t play any instrument; whenever I touched friends’ synthesizers with regular keyboards its usually really uncomfortable and I feel like I just hit all the worst combinations of keys all the time. This somehow feels much more approachable, you can just try around with some shapes and scrap the ones that sound bad

This thing looks so cool and exactly like something I’d love to play!!!

As for the keys in the M8, they are super satisfying in their clickiness. I adore them. They are both easy to press, but are so easy to tell when fully compressed. In a way, for something like this, they’re great because the click keys you know exactly when the action has taken place. I’ve used the M8 already in a way that would be preformatvie and it’s just such a damn blast!

I’m going to be keeping an eye on your project for sure. My main keyboard is an Ergo Dox, so you can tell I really have a thing for split boards.

Following with great interest. This is a beautiful project!

Looks gorgeous. Suggestion for a name - Mellifera Midi-44.
(after the honey bee)

This project is absolutely amazing! I love everything about it
Looking forward to how this evolves, and I hope you choose to keep it open hardware

since you will have two hex keypads, one for each hand, you might try the very nice Dualo layout: http://dualo.org/en/dualo-principle/

Looking forward to how this evolves, and I hope you choose to keep it open hardware.

since you will have two hex keypads, one for each hand, you might try the very nice Dualo layout:

Oh wow, it hadn’t occurred to me at all that there might be split musical layouts! That’s a big blind spot to explore now

This exact layout seems to require a lot more keys per hand than I currently have though, I think? Or would it also work having just a part of an octave on each?

There’s been lots of progress with this project, which has sort of split into two at this point. For one, I’ve machined the second half and assembled it all, although I am still missing some keycaps. I also changed the keycap process to CNC machining them directly out of the same material as thee case (POM), which is a much more streamlined workflow and allowed me to finally get the fit on the keyswitches perfectly right. They also break up the light in a much nicer way, as you can see in this picture: 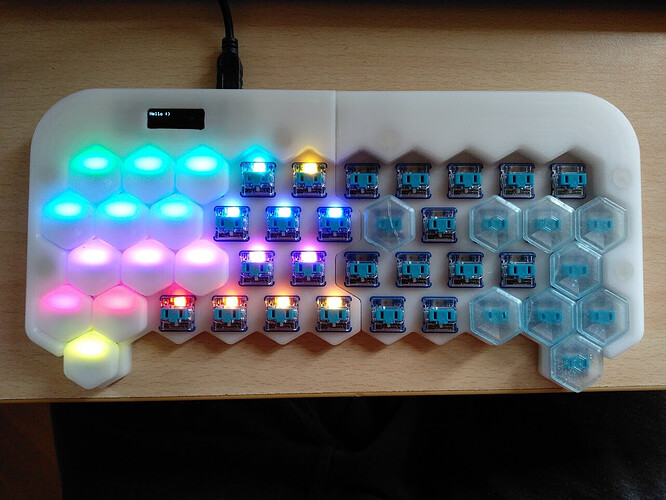 The firmware still needs some work, I haven’t gotten the inter-board communication to work yet, and i also want to be able to highlight a specific musical scale which is not possible yet.

The second part is that I am collaborating with FK Keycaps to make hexagonal keycaps on a larger scale using injection molding. Since the fixed costs for a new injection molded design are quite high, we decided to launch these keycaps together with a more mainstream 12-key macropad design called 0xC.pad:

like the big prototype, the macropad has full RGB backlighting and uses Kailh Choc switches, but the case consists of two machined aluminum plates and the macropad uses a USB-C connector. 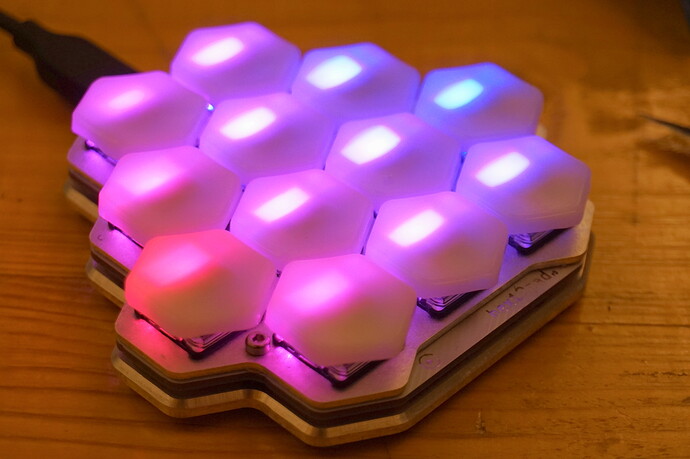 There’s currently two manually produced prototype units built, and we are now collecting feedback in order to fine-tune some of the choices we need to make for the group-buy, so if anyone would be interested in getting one of these, it would help us out if you were to fill out that form:

Innovation and creativity are the two things that make this hobby fun and ever evolving. This project combines both, and aims to create something unique that hasn’t been done before. It is literally the definition of thinking out-of-the-box, drifting...

It will also be possible to buy individual keycaps if we get enough interest to get this off the ground. The dimensions and layout information will be available for anyone to design their own boards, and I’ll definitely take a shot at making a musical keyboard with them available at that point as well

I finally got all the remaining keys done, here before cleanup: 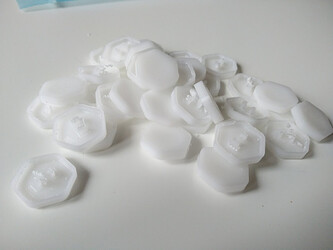 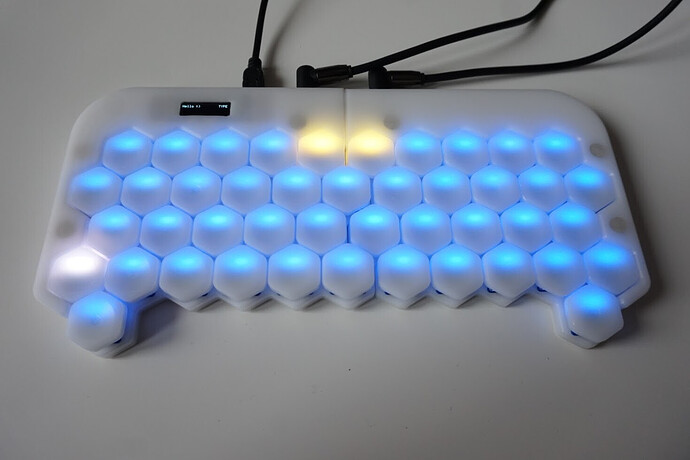 The software is also 90% done, allowing to pick a scale + root note to highlight and displaying that on the oled screen. There are some bugs to work out, but I’ll try to update this again very soon with the completed firmware and a demonstration video

Looks great! I thought I was following this thread but totally missed the macropad announcement a few weeks ago. Anyway, threw my hat in the ring for that… and definitely TRACKING this topic now!

Cool project! If you are thinking about producing these to sell, may I recommend adding hot swap sockets for the switches? Like THESE. This will make a longer lasting product as bad or failed/broken switches can just be popped out and replaced without soldering.

What does it feel like to type on? Somewhere between staggered and ortholinear?