Just getting the thread started so folks can start dreaming and scheming and theming for the upcoming solstice compilation.

LCRP is a bit of a misnomer for the solstice compilations, because this time we are not doing remixes and there is no shared sample pool. Just a deadline for your original compositions. The deadline is June 21.

Many of us are playing with constraining instrumentation for this compilation. We will limit ourselves to a single sound source for the entire track. Some will do this for part of the track, to provide contrast with a more maximal approach to instrumentation. Solstice is a time of extremes, a good time for a study in contrasts.

Use the constraint to inspire you. If you find it demotivating, try flipping it on its head. Try taking it 90 degrees to the left. Try doing it’s opposite. Try ignoring it. Invent a new constraint. It’s not a hard rule.

The word “hylozoic” means the notion that all matter is busy enough with the gnarly computation of simply existing at the quantum level, that we might as well regard it as alive. Rudy Rucker muses more about this in a post linked in the thread below.

There’s been some good discussion here around nature / processes in nature. How about something loosely around that?

Other natural or unnatural processes that are like modular synthesis Open

hello, i’m new to modular (i got an 0-coast about a year ago and am obsessed with it, i just acquired a braids and am building my rack this weekend), and like all people who are new to modular, i’ve been watching zillions of youtube videos on the topic. of all of the disembodied voices i’ve heard in eurorack vids, the one that stands out most to me is make noise’s tony rolando. in one of his videos, tony explains that the modular synthesizer and the composer meet halfway between chaos and contr…

I find my work to be most inspired by natural settings and beautiful views. Especially in this day an age, it is a welcomed change of pace to be in a quiet and peaceful place without the many distractions a city hosts. Just the sights and sounds. Although there are already a few photography orientated threads, I thought it would be nice to have one dedicated only to nature. A place to become inspired by our beautiful planet on a rainy day, at 3am or simply if you don’t want to leave the house. …

nature, field recording, city noise, … it all sounds good to me

What do folks think about @steveoath’s suggestion of using only one piece of gear?

I have to admit that I have some difficulty with this concept because I usually work in the box with software. Drawing a bright line around some part of it and saying it’s “one piece of gear” is a bit of a challenge for the way I usually work. I don’t really own any hardware that is capable of making an entire song without help from any other piece of gear.

EDIT: on second thought I guess I do have some iPad apps that might fit the constraint. Kinda dings my enthusiasm for the project though.

Perhaps one sound source, whether a soft synth, one oscillator module, or one hardware synth, with multi-tracking and effects. It seems there are a lot of people here who do more live performance eurorack oriented stuff, so it might not work as well for them.

Yeah if I’m allowed to use a DAW with effects and one synth, I can work with that.

Thinking about natural processes that are like modular synthesis got me thinking about Rudy Rucker’s “gnarly computation”. It’s a favorite topic of mine and I even used wolframtones.com cellular automata as a starting point for my track “cellular solstice” for the last solstice LCRP.

While I was looking around at that stuff I once again bumped into a favorite topic of Rucker’s, that of “hylozoism”, the idea that all matter is in some sense “alive” in the sense of its mere existence the consequence of ongoing gnarly computation.

Does it feel like a theme you could find some inspiration from for your compositions?

Photo found on Facebook showing complex vibration and vortex dynamics in the undersea side of a breaking wave. 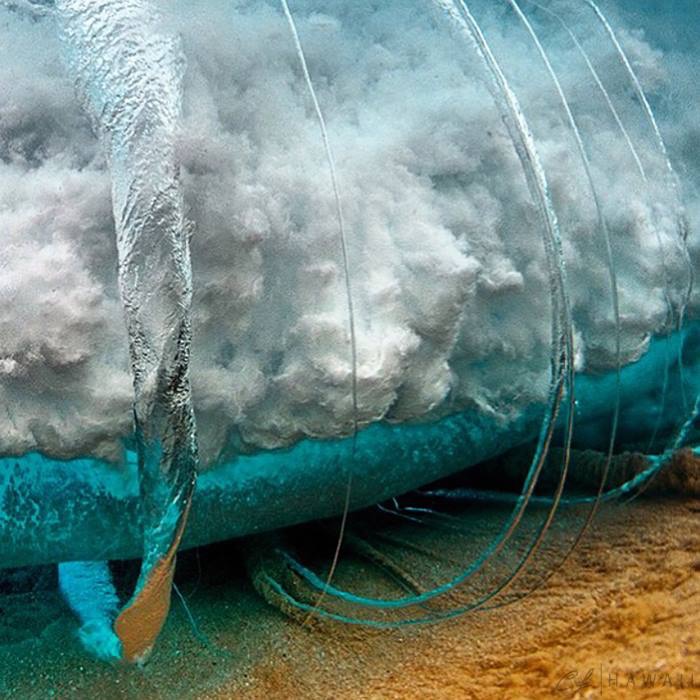 I’m struggling to see how the one instrument rule would apply across different instrument types: i.e. is a oscillator an instrument, or is it the equivalent of a single string on a guitar?

I’m all for some form of constraint though.

Jason - there’s an electro album by the remaining chap out of Drexciya called ‘Cellular Automata’ - not sure if it’s your thing though. Love the images.

I’m gathering from reading the whole thread that the definition is a bit loose.

They were a seminal Detroit electro outfit whose theme was that they were some lost underwater beings, along the lines of Sun Ra and Funkadelic.

Following the death of his partner, Gerald Donald built on this Dopplerefekt alias - Cellular Automata is a relatively recent album.

I forget who the quote is from, but there’s a line that back in the 1990s when techno was properly new and cutting edge, all the DJs would go back to the afterparties and listen to Drexciya… It’s pretty seminal stuff in that scene.

About the “one instrument/piece of gear” constraint, it is maybe a bit drastic (even though i can see myself digging up the Shnth and finally writing something for it). Maybe a “carefully select a minimal setup compared to you usual one” rule ?
Or, as a solstice is about maximum unbalance, some track should be one instrument and others use as many stuff as possible ?
Anyways, I would gladly follow any limiting rule.

I like the idea of carefully chosen constraints that serve an artistic goal. I’m feeling a lot less confident about imposing constraints on others (especially for the solstice projects where the emphasis is on original composition, so I tend to think of “whatever serves the composition” as the primary constraint).

That being said, I’m personally game to try creating a multitracked/arranged song where each of the channels uses the same sound source. Mostly because it will force me to work on my sound design chops and that fits with my personal artistic goals of the moment.

So, to build on what @ermina said, let’s go for extremes in a solstice inspired manner. If minimal instrumentation doesn’t feel inspiring, then try maxing it out, go full orchestral (for your own definition of “orchestral”). It’d be really exciting if we happened to end up with a good mix of both approaches.

I am ready for it! 1 instrument…

I’m keen to participate in this one. I had wanted to in the others but couldn’t get organized to record samples to contribute. This also fits with my current fad of splitting modules out to a small system to concentrate on getting the most out of the least and self patching etc.

I’ve decided what my sound source is going to be.
https://www.physicalaudio.co.uk/PA3
It’s a physical modeling synth.

Is there a date set yet? Maybe, I read over it.