Hyōshigi: What is the nice sound?

Tonight I came across this video, which was being shared as a meme:

My initial reaction was that this is a bit silly, but I slowly became fixated on the premise of what the person is describing. The instrument is called Hyōshigi, which is a kind of wooden concussion idiophone. What I am trying to determine is what is the “nice sound” this gentleman is describing? Probably part of the resonating sound is lost in the video. I am trying to understand what he was trying to achieve? He strikes it in such a specific way.

Does anyone have any thoughts or insights on this? I am also curious about other musical pursuits that evolve to this level of specificity. This wikipedia rabbit hole lead me to reading about bell making for part of the night. I’ve noticed some similar tendencies here in the Hardware Physical Modelling thread.

What I am trying to determine is what is the “nice sound” this gentleman is describing?

You’ve sent me down a small rabbit hole here. Figuring out what these things actually sound like when played well and recorded well is seemingly quite difficult haha. Everything on youtube is either a shitpost (volume warning) or seemingly recorded 10 years ago on someone’s phone. From what I gather it’s not typically played as a solo instrument and that likely contributes to this condition.

I can see how they would sound quite nice played by someone that knows how and w/ a half decent recording.

This video is good but it doesn’t claim to be the most beautiful example of the form:

I’m still trying to figure out exactly what the claim is of the “nice sound” Is it the percussive transient? Or the long decay of the sound? It does have a timbral quality, maybe similar to ASMR in some respects. Like a sharp attack leading to a brittle sound, like ice clacking. Is this difficult to achieve as they claim?

I am ethnically Japanese but I cannot read or speak the language so finding definitive answer has been difficult. It has really captured my imagination. There is something in these Japanese hobbies that I find fascinating, like wood planing competitions for example:

Something done to such perfection, it almost becomes useless in a way. But there is still a beauty in the relentless pursuit of it. That’s what reminded me of the synthesist’s challenge to reproduce physical sound processes, bells, wind instruments etc. to a degree of uncanny. I think it’s interesting when someone in modular’s goals are not necessarily musical. The CGS V8 Simulator is a great example of that.

I am curious to find more musical exercises like this, lowercase as an example:

Oops… I got the first video in my YouTube, a couple of weeks ago and I really laughed till tears. I thought it was a joke, but it’s really an instrument.

I wonder if the technique leads to a single clear impact for both sides, enough to fully excite the material but not to muddy the resonance.

I’m imagining the interesting part of this is hearing the properties of the material in such a pure way. I sometimes use a teaching space at work which has these fascinating (but technically awful!) acoustics to it - you clap and the reflections bounce from left to right like Karplus Strong. I could spend hours in there, but my colleagues would likely get concerned…

Love this link - totally agree with the connection.

This may or may not be related, but when I learned to play claves (also two sticks, but round) in high school, my teacher had us try a number of different pairs, each of us rotating them in our hands looking for a “sweet spot” that had a pure, clear strike – maximum resonant tone with long decay. Wood from different parts of the tree have different grain structure which affects the resonant properties, and hitting a stick in various places will excite it in different ways.
I wonder, also, if it would be easier to hear the nice sound if we could also hear a bad sound…

a whole lot, if not most, of Steve Rodens work (except for quite recently) is built from this kind of material examination and electroacoustic treatment of it. light bulbs, tea cups,
furniture. a great place to start and stay for a while. he’s got a good selection (and previously unpublished work) on this bandcamp

is the teacup piece

you really can’t go wrong with Steve Roden.
For many years now has been a favorite.

For me, the second sound (@ ~7s) in the “good video but not most beautiful example” was definitely NICE SOUND, like, my attention was suddenly completely diverted to hearing it…

Disclaimer; FWIW, I have an almost overwhelming ASMR reaction to certain sounds

I have always loved the hyoshigi sound, and it defnintely matters how you hit them. I tracked down an antique set on UTube and use them to call people to dinner. Nobody appreciates it except me! I did not know about the cord techique, which is not used on the other videos. My cord comes off the ends and I can’t rock against it. The good sound has a “boink” in it, a dipthong as in “coin”, not just a clap. If you hear it in a great hall at the start of a sumo tournament, it’s electric. The reason I found this thread is that I’m writing a novel about Japan and just saw how I could make hyoshigi an important element in my story. The character is an American female, and I’ll give her my experience with hyoshigi. The locals always want you to get a special sounvenir. I asked for the sticks, before I knew the name, and they didn’t recognize what I wanted, and then when they did, they laughed and thought it was so stupid to get something so worthless, artless, forgotten. They had no idea where to even buy such a thing. Their impressions were that they simply fell out of use for fire warnings. But I had to remind them that they are used to start things. So I’m coming up with comparisons of things Americans hear that are similarly pointless, the throwaway part. The tones to get you out of the lobby and back to hear the opera, the real music. Or the conductor tapping his baton, before the orchestra starts. It’s just a functional sound, maybe asking to buy a doorbell to take home as a souvenir? So nobody could ever find a set for me to buy, hence my later purchase of antique sticks off of eBay. (I give it deep, Shinto-related meaning in the novel, but I won’t bore you with that.) Anyway, it is nice to see some others on this thread who hear something special in it.

OK, this is really creepy.

But I’ve heard these sounds before.

They’re complex, multi-octave, resonant, piercing and transient. I get that.They are interesting to listen to.

But I’ve heard them before, just not in this life.

I have the very strong feeling that they were used in Noh theater, which I’ve never seen, and have never thought about until now.

When I went to figure out why, I visited this link.

Listen through to 0:18. You’ll hear where this sound would have gone. I’m sure of it.

I’m going to go sit down somewhere else and reflect on this for a little while.

If its of any use, you can buy these at the shop downstairs from the Drum Museum in Asakusa, Tokyo (although I suspect any Taiko drum store sells them too) The museum is a lot of fun, as you can play many of the exhibits… worth saving a bookmark for when we are allowed to travel again… 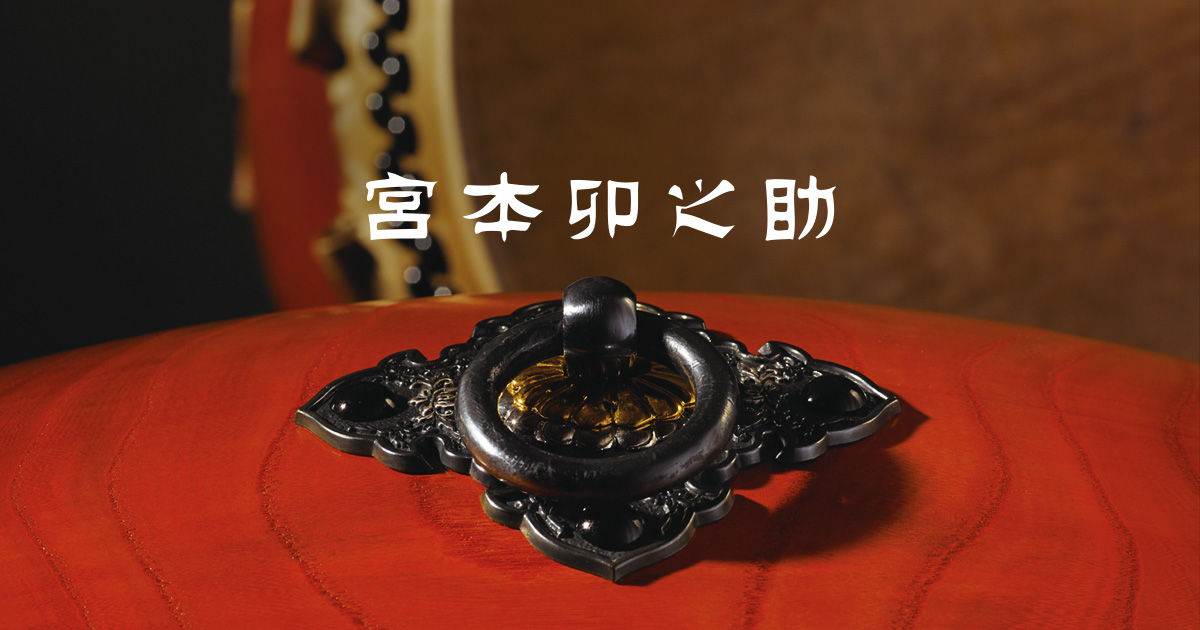 My theory: they act like a impulse triggering room acoustics, like a film clapper board except even louder. IRL they are so loud that these videos will be hard limited/clipped to hell… I bought a pair thinking they could be useful for this reason (eg Altiverbs IR processor has settings for specific makes of film clapper boards, so if no other impulses were captured a basic room IR could be created from the clapper board to help matching ADR to DX) - I’ll try measuring how loud mine are with an SPL meter…

Just imagine how they sound in a silo, church, temple, gym, alleyway or eg in this stadium before a sumo fight

In this video the 拍子木 are played more gently, and the tone (& absence of crushed room acoustic) is very noticeable by comparison: 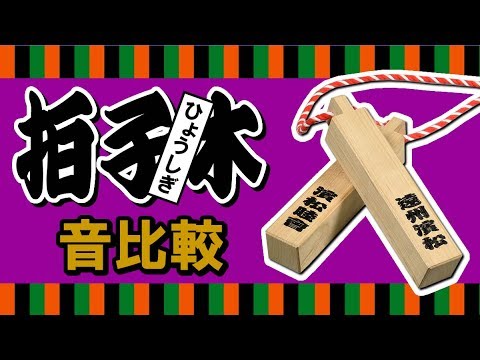 Don’t taiko players strike the sticks together making a similar (by YouTube quality standards) sound? Perhaps this is the “Noh” sound you are imagining? FWIW I am imagining a similar sound/association.

I have the very strong feeling that they were used in Noh theater, which I’ve never seen, and have never thought about until now.

I have heard this sound before also in Noh which I’ve never seen and which I haven’t really thought about until reading this thread. In the wikipedia article it mentions " Hyōshigi are also used to stress confusion and other dramatic moments in the play."

The only bit of Noh that I’m familiar with is from the “Illusion” track from the Akira soundtrack. You can hear the Hyōshigi being played at different intensities during the track. What I would consider a “nice sound” occurs at 3:43. AKIRA soundtrack - Geinoh Yamashirogumi - "Illusion" - YouTube

In my taiko group, we had a pair of these and never used them in music; they were just for the start and stop of the dashi procession at festivals.

We did have one song with claves. Those are harder to play well than one would guess at first since you need to hold them in a way that doesn’t dampen the sound.

love this sound! would anyone know what the best way to record it with microphones might be? To be used as a sample and run through a convo plugin say.

The first guy is a gear snob! haha. He’s like this is way better than any clone.

If its of any use, you can buy these at the shop downstairs from the Drum Museum in Asakusa, Tokyo (although I suspect any Taiko drum store sells them too) The museum is a lot of fun, as you can play many of the exhibits… worth saving a bookmark for when we are allowed to travel again…

Thanks for the tip - if it wasn’t for COVID, i’d be on holiday in Tokyo right now… well, hopefully next year. Saved for future reference!

It isn’t really the same, but the nice sound reminds me of snooker balls colliding.

edit: actually this makes me want a sample pack of snooker-related sounds. It’s such an ASMR-friendly sport.