I want to find a label

Hi, it is now so much time passed since I started to look for a label for my music, I’m now ready with a good (I think) small collection of ambient/experimental/beat stuff, and I can’t find where to propose that music. Do you have any suggestions?

labels are great but usually only work for people where the label thinks they can profit from it. from my experience, the only people they are ever interested in are those with a modicum of name recognition.
but with that logic, its super hard to ever get your initial jump in if no one ever opens the door… so, part of that is to eschew the premise that you need to find someone… they will find you in due time…

the way it works for most labels or orgs is that regardless of how good something can be, it will probably still get passed on (in most cases, speaking from experience and friends experiences) because of someone they know or have some affiliation with… thats where making pals/connections with new people and just getting out there really counts.

some good news though! if you are cool with tape labels putting something out, there are loads of good ones. for my last release, which was in the fall, i had two tape labels simultaneously put out three tapes and then a fourth was digital only, self released. it worked out great, sold out of the limited edition in an hour and got some help in promo from the labels, one in london and one in australia… it worked out great but took a lot of discussions beforehand about ownership and who paid for what and a tremendous amount of time… but was worth it…

bandcamp is a fantastic option and allows you to control your work the way you want to. also, if you have $200.00, you can self fund a run of cassettes. the one thing i dont think works well though is cold calls: instead, use your personal connections, be patient, make cool limited editions where people get more than just the music, and just keep releasing really good stuff… also play shows, that gets people to notice you in a way the internet cant.

all of that being said, look at releases you really like and resonate and get in touch with people. send them some old stuff and new. most labels get inundated with offers so dont posit it as a desire for them to release this new thing you have right now, pivot it as “you made something i really like, so heres something from me to you: hope you like it and thanks. hope we can work together in the future”… one of my pals got on kranky doing just that. its all about dumb luck and strange timing… and obviously good work. just dont let it get you down as it has me many times in the past. good luck out there!

I’ve been thinking about this whole label thing myself as well a lot lately so thanks @ssmblr-rspndr for the interesting points, which I think totally make sense!
One should add that the role of labels has changed a lot in the last years. Back when self-distribution was a lot harder, getting a label was essential to have your music distributed. Labels would also do a lot more promotion and booking, while now, if you don’t have a bigger label that supports you, you often have to take care of promotion mostly by yourself… at least that’s what they tell me, wouldn’t know it myself, since I never had a label (well except fro some really tiny netlabels).
I think the role of labels now is to help people orient themselves in the overcrowded internet music landscape, where hundreds (thousands?) of albums are published every day and one really wouldn’t know where to start to find the good stuff. For instance, once you figure out that you’re into the stuff 12K makes, then you just check what else they have, and which other labels do similar stuff. There’s probably millions of 12K-like artists out there, but having somebody who did the work of listening to a lot of these and choosing among them is a big help… Of course it was like that also before the internet, but it’s become kind of more essential now.

The big question is: do we have to make music based on which labels we’d like to find us, to make being chosen more likely, but possibly biasing our own artistic vision in favour of the market – or do we just make our music and hope that it will fit into somebody’s drawer? big dilemma…

For me that approach is doomed to fail. If i pick any “pre-existing” style, even a niche one, and tell myself, “let’s do something that will fit that”, i can’t help but be paralyzed. I feel it’s pointless to eschew my inner drive in favor of hoping for some easier kind of recognition (“being adopted by a market”).
I’m not interested in being recognized for something that is a mere calculation; moreover, plenty of other folks already fit that market with great talent, so my chances would be nil.
Trying to fit a niche is ok for exercising imho, copying a particular style or artist to help dissect and understand it better.

Anyways, if one does its own thing with enough perseverance and originality (not to forget a bit of luck), chances are one will meet some “market” — or even create it.

agreed. never chase what the “market” favours. thats what pharrell or someone like him does. dont be like pharrell.

I see the broader point but pharrel is actually nice

Do you have any suggestions?

My first advice is to think about your own intent. If you are reasonably sure the direction you’d like to head then recognizing the opportunities you want to pursue and spend energy on becomes easier.

do you mind going into a bit more detail about your goals? what would make this project/partnership a success?

and not to sound dense, but, what do you mean by “label”?

Also consider recent Grammy winner Chance the Rapper. He doesn’t have a label and releases all of his music for free online. 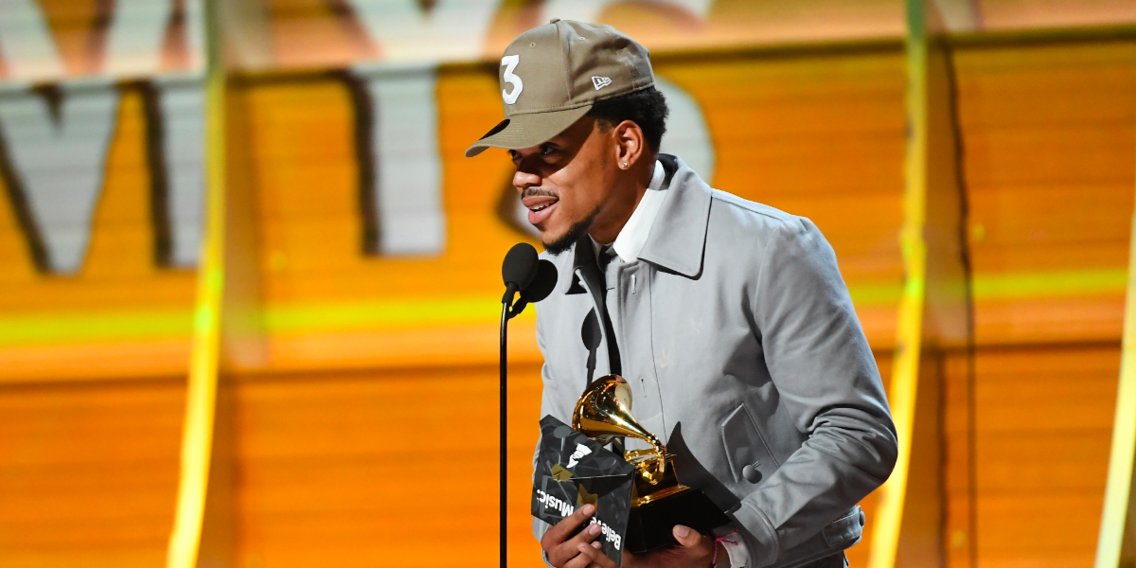 Chance the Rapper did something historic at Sunday night's Grammys, ushering in a new era for streaming-only and unsigned artists to win at the awards.

Not saying that winning a Grammy is the end-all-be-all, but the landscape has changed to the point where such things are possible. Given how easy it is to release music yourself for essentially free, become your own label or search out people with a similar philosophy, approach, or aesthetic. Perhaps you could even start your own label.

I don’t want to find a label.

COME ON AT ME WITH YOUR BEST OFFERS, LABELS!

on a more serious note (not that I’m not totally up for labels finding me) I just wanted to say how sad I am that The Leap, a label that released so much good stuff from this community, hasn’t put anything out in a couple of years.

Their releases from HIKO TANIZAWA, @nosire , and @tehn are just beautiful.

Plus, it’s a label I really feel I could have been happy releasing on.

@watson - What happened? Still got plans?

while we’re channeling our inner-raja i’ll step outside my normal shell and say aloud: I’d love to work with sm-ll in the future

hehe sure. he was just the first famous person to jump into my mind.

Thanks everyone for the really good suggestions, I don’t know what are my actual goals, since I’ve started music I’ve dreamed about being an affirmed artist and blablabla, to be at the same level of your idols (but who doesn’t). But then I realized that this could also not possible. Yes I Know now: my goals are to let my music to be knowed and listened to much people as possible who can enjoy it. That would be also nice to start to work with music, like soundtracks and music for videos media and stuff. And I’ve been recently a lot frustrated sending demos to lot of labels, or proposing my music to lot of people. I know actually that the best way is to self produce my stuff, Is that I’m actually doing but with very bad results. It’s hard for me to find the right circuits where introducing my music (except here, the only place where someone gives a listen, or fb, where it doesn’t work so well).

And I’ve been recently a lot frustrated sending demos to lot of labels, or proposing my music to lot of people.

this can be really hard

you’re based out of japan right?

I’ve got some links with Japan, like my father got remarried with a Japanese, but I’m from Italy!

no idea I confused you with somebody else

I’ve got some links with Japan, like my father got remarried with a Japanese, but I’m from Italy!

@hi.mo Well one thing is sure… you will not have much luck finding a label in Italy, except if you’re doing something that might fit into Boring Machines’ lineup.

Nah joking… even in Italy there’s some interestin labels!

For me that approach is doomed to fail. If i pick any “pre-existing” style, even a niche one, and tell myself, “let’s do something that will fit that”, i can’t help but be paralyzed. I feel it’s pointless to eschew my inner drive in favor of hoping for some easier kind of recognition (“being adopted by a market”).

@ermina I think I have to integrate my previous statement here, because apparently I’ve been expressing myself in a misunderstandable way. The dilemma is not so much about following a pre-existent style, more about how much one should take into account what the labels one would like to be published by do look for. It’s a subtle difference maybe, but I think a pretty crucial one. A lot of labels look for artists that move outside of genres, and yet if you analyse their releases there’s always a certain “fil rouge” going through them. I’ve been often advised to look for labels that do something I think would be close to what I like to do and then make something targeted at them (and we’re not talking about mainstream labels… but about small, underground stuff).
But I totally agree with all who said that one needs to find a voice of his own, but maybe there’s more to it? Maybe if you are able to analyse the pattern that make up your voice, you’ll find out that it already fits into a niche, without the need to force it to do so.

even in Italy there’s some interestin labels!

Based in Berlin, not Italy, but one of my favorite labels is Stroboscopic Artefacts which was founded by an Italian and features quite a few Italian artists.

What are some Italian labels to check out?